At the family farm, Kathy Brock's passion for storytelling was born 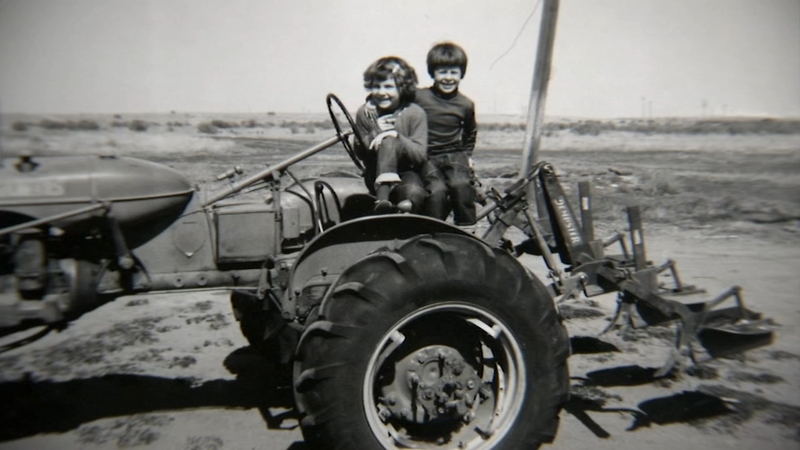 At the family farm, Kathy Brock's passion for stories was born

CHICAGO (WLS) -- The Brock family farm outside Pasco, Washington, is still a working farm. Kathy's straight-talking but undeniably proud parents shared some insight on their daughter's path from the family farm to broadcast news.

About two hours south of Spokane, you can find the picturesque Brock family farm; roughly 350 acres of rolling hills and crops with cattle, a couple horses, and a loyal black lab.

It is also where Frank and Carol Brock raised their three children.

The farmland is now leased but Frank and Carol, now in their 80s, still maintain the house and surrounding buildings. They are keenly aware of the invaluable life lessons their children experienced there.

At a young age Kathy was driving a tractor, baling hay, and changing sprinkler pipe.

"It was a great place to grow up. I really have to hand it to my parents because when we were kids we really learned a work ethic," Kathy Brock recalled.

Four-H Club was a large part of Kathy's childhood as well. She trained horses and performed in riding competitions. She also raised sheep, showing them at the county fair.

"It was a form of public speaking as a very young kid, I think those things are formative," she said.

"In order to win you have to practice, and she did that, and did that same kind of dedication in whatever she did," said Frank.

Classmate Dan Schneider recalled Kathy's drive and determination, even as a kid.

"Growing up in 4-H, I knew a long time ago, over 50 years ago, that she was going to be successful at anything she did," he said.

Life on a rural farm didn't mean life in a bubble. Frank was a steady presence in local politics, serving as school board president and county commissioner.

Community involvement was woven into the family fabric, along with daily consumption of news.

"We just felt like we needed to do that to keep ourselves informed," Carol said.

Local news radio played in the kitchen every morning, and the 6 p.m. news was on after dinner.

"News was important in my household. We talked about it and we consumed it," Kathy recalled.

Kathy was a top student and voracious reader. The power of those stories took her to other places, fueling her desire to tell her own. She attended Washington State University and the Edward R. Murrow College of Communication. She graduated on a Saturday and that Monday started working at the local Pasco TV station, KEPR.

"I was a reporter in the afternoon. I would do weather at 6 o'clock, I'd go back to our station and do another story at night, and then I would produce and anchor the 11 o'clock show," she said.

Kathy's broadcast journalism career eventually took her to ABC7 in Chicago in 1990. She's a noted distinguished alumni at Pasco High School and many of her family's longtime friends and neighbors know of her success. Her mother makes sure of that.

"We have a coffee group and many of them have put the channel seven app on their iPads," Carol said.

When asked how they raised such an accomplished daughter, Frank immediately gave credit to his wife of 65 years.

"Well having a good mother is a big plus on that," he said with a laugh.

The Brock family farm also has a neighbor Chicgaoans will probably recognize.

Bears Hall of Famer Brian Urlacher's mother grew up on the farm next door. Her parents have known Brian and his brother Casey since they were little kids. And when they're in town, they stop by the Brocks' to say hello.

Carol said Brian drops by for her razzleberry pie.

Alan Krashesky shares a heartfelt message with co-anchor Kathy Brock as she prepares to retire.