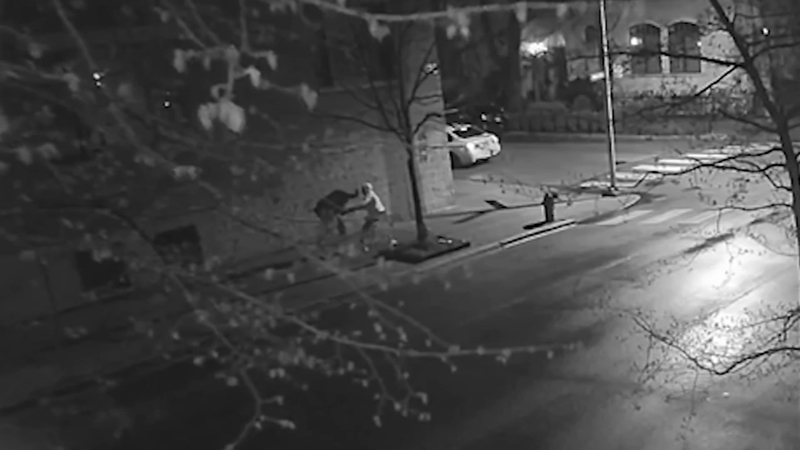 CHICAGO (WLS) -- Chicago police are asking for help as they search for a suspect in a violent robbery and shooting in the Lincoln Park neighborhood that left a 23-year-old man fighting for his life.

Even as police called on the public to help, three more armed robberies took place in the Lincoln Park neighborhood Monday morning. All of them appeared to involve the same vehicle.

In one of the incidents, police said a man was knocked on the ground and robbed at gunpoint near Armitage and Fremont around 1 a.m. Monday. Police described the suspects as four men in a grey SUV.

And while a connection has not yet been established, the latest Lincoln Park incident comes just as police are making a public appeal for help as they try to track down those responsible for a violent armed robbery Friday that left Dakotah Earley fighting for his life.

"We definitely need help and I have no doubt there are people out there that they know exactly who these offenders are," Chicago Police Chief of Detectives Brendan Deenihan said.

Police believe the same suspects are responsible for the attack on Earley and at least seven other armed robberies that took place in Lincoln Park and Lakeview between May 4 and May 6.

"We believe not the same car was used in every single one of these," Deenihan said. "But a lot of times they have tail cars, they switch cars, etc. Many times the cars are stolen. So, based upon the MO, we believe these are the same offenders."

Earley's shooting was caught on surveillance video. It shows the recent culinary school graduate walking near Wayne and Webster when he is approached by an armed robber. They engage in a brief struggle before Earley is shot three times as the robber continues to demand Earley disclose his cell phone's passcode.

His brother, DaShawn Earley, spoke to us from his home in Atlanta Sunday.

"The first time I saw it, my stomach sank and my heart was in pieces," DaShawn Earley said. "Watching that video you're just at a loss for words because it's like, when you see it, it's just, wow. I can't believe they did that."

Chicago Police Supt. David Brown said Monday that Lincoln Park is among the neighborhoods that will be receiving additional police resources over the coming days and weeks.

Four community meetings are taking place between police from the 18th and 19th Districts and the residents within them this week. While some were scheduled before this latest spate of incidents, the robberies are expected to be top of mind during those discussions.

At Monday night's meeting CPD officials said they are making some headway investigating these recent attacks.