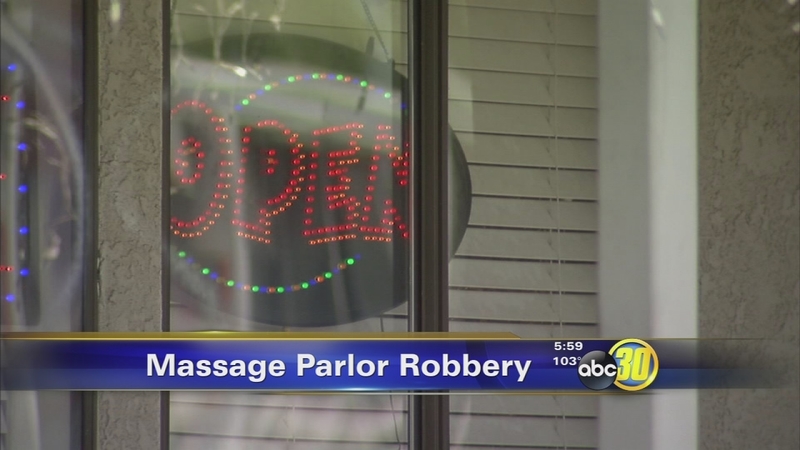 FRESNO, Calif. -- A Fresno massage parlor has been targeted in a very frightening robbery. Police say the crooks posed as health inspectors before pulling out machetes. The crime happened Sunday night near Blackstone and Shields avenues.

"They had white dress shirts on, dark pants, one had a pony tail," said Lt. Joe Gomez with the Fresno Police Department. "They pulled out machetes described from anywhere around two feet long machetes and they robbed the females who were in there."

The owner, who didn't want to talk on camera, said she had just walked in the back door of the business when she was confronted by a man who put a knife to her throat. Police say each robber terrorized workers and their customers- one of whom was getting a massage when the robber busted through the door and into their room.

Lt. Gomez said, "It seems there was a victim there at the time, they told that victim to leave. And then as they are in there committing the robbery, two more customers came to the front door, that frightened the suspects and they left out to back door."

Investigators say the suspects presented to workers what appeared to be Fresno County ID cards. One mistakenly left behind is now the best piece of evidence police are working with.

Lt. Gomez explained, "It was a homemade card, had his photo on it and the Fresno County logo saying that he is a health inspector and fortunately that card was left."

Employees have identified the man pictured on the fake card as the one who put the machete up to the throat of the owner. If you recognize him, Fresno police want to hear from you.

Investigators are now reviewing surveillance video from the area, including this clip that appears to show the suspects driving through an alley near the business.

Detectives say each robber played a role in the crime. One targeted people while the other rummaged around looking for anything valuable. A reward is being offered for information that leads to an arrest.