Indian giant squirrel with dazzling, multicolored fur is the flashiest animal in the forest 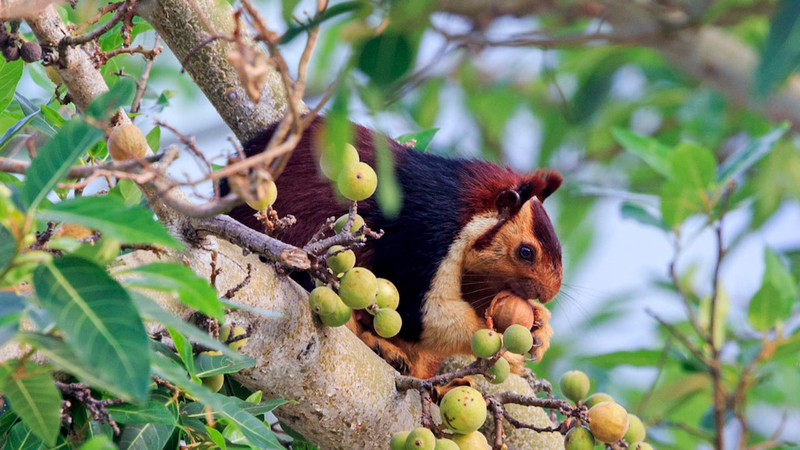 Indian giant squirrel with dazzling, multicolored fur is the flashiest animal in the forest

The mesmerizing Indian giant squirrel might just be the most famous squirrel species on the internet today.

Compared to other squirrel species, the Indian giant squirrel (also known as the Malabar giant squirrel) sports noticeably more colorful reddish-brown fur on its body, often in a stripe-like pattern. The creatures are making a splash after one photographer snapped photos of an exceptionally flashy squirrel that looks as though it's been spray-painted with burgundy and navy stripes.

"The response I see from the people on social media when I post a picture of the giant squirrel fuels my enthusiasm to go out there," Indian photographer Kaushik Vijayan told British news agency SWNA. "It was when I shared some of the photographs on social media many of my friends and followers came to know about the Malabar Giant Squirrel and they were all amazed by its appearance."

While the squirrel might seem like an oddity to a western audience, the creature is commonly found up in trees in various wooded areas of western and central India. They're known to grow to be about a foot long and can live more than a decade, according to the International Union for the Conservation of Nature.

Two studies in the 1990s found that the animals build "eagle-sized nests" in trees where they raise their young until they're independent enough to venture out on their own, according to the University of Michigan. The creatures are solitary omnivores with a taste for fruit, bird eggs, bugs and flowers.

The IUCN has classified the Indian giant squirrel as a species of least concern -- meaning it's not considered to be critically threatened or endangered -- but notes that the squirrel population is trending downward as deforestation, logging, hunting and other activities threaten the forests that the animals call home.

A Virginia resident found the two-headed copperhead snake in her flowerbed. It eventually ended up at the Wildlife Center of Virginia, where experts conducted radiographs to learn more about the snake's anatomy.