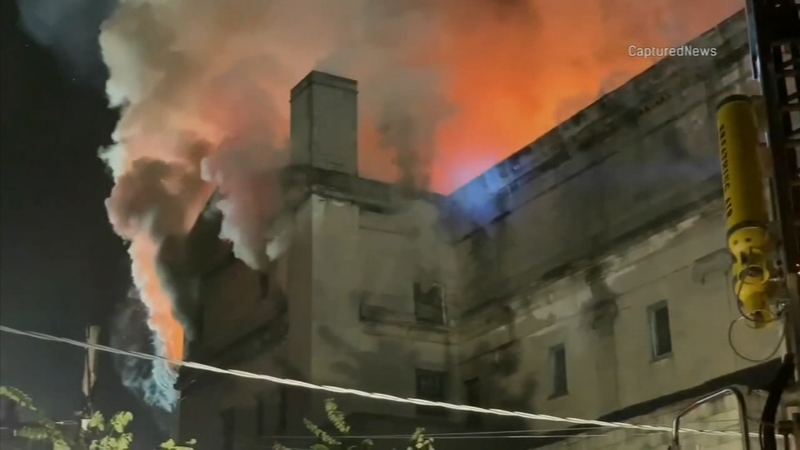 AURORA, Ill. (WLS) -- The abandoned Lincoln Masonic Temple in Aurora has been destroyed by a fire that broke out Monday night.

The longtime historic landmark in downtown Aurora hasn't been used in over 10 years.

The fire broke out after 10 p.m. in the 100-block of Lincoln Avenue. As fire crews worked to put out the massive blaze, residents in the area were asked to stay back.

"We were just watching it, hours and hours burning," said Artisha Nunnally, resident.

Nunnally said she was awakened around 10 p.m., when flames started shooting out of the building. She and her family watched as firefighters brought in hoses through their yard to tackle the blaze.

"I don't know how secure it is inside," Nunnally said. "I don't know if it's hollow in there, is it gonna come down, we don't know."

The building quickly began to crumble and the family had to rush to move their cars. They couldn't get to the family's van; it's now a total loss.

Structural integrity continues to be a major concern, and firefighters evacuated residents nearby for safety.

Morgan Burrell grabbed her baby August and ran out the door,

"They kicked us out by about two in the morning, they were like you guys have to go, it was too much smoke it was you could hear parts of the rubble falling and hitting the house right next to it. It was horrible," Burrell said.

Some of the building collapsed onto power lines. Power was knocked out for some homes. No injuries have been reported.

The Masonic Temple was built in 1922 was listed on the National Register of Historic Places in 1982. The 50,000 square foot building has been empty since 2008 when it was being used as a banquet hall. The city shut it down for a variety of hazardous conditions inside and out.

Neighbors said homeless people and teenagers often break in the building at all hours of the day.

"There's always animals, there's kids that break into it, there are homeless people in and out of it," said Morgan Burrell, resident. "You can see hordes of bats flying out of it at night."

When the fire broke out, Burrell said she grabbed her baby August and ran out the door.

"It was too much smoke, you could hear parts of the rubble falling and hitting right next to it," she said.

"Anytime you have a vacant property that's that old you worry about what's been deteriorated and what could fall off of it," said Aurora Fire Chief Gary Krienitz.