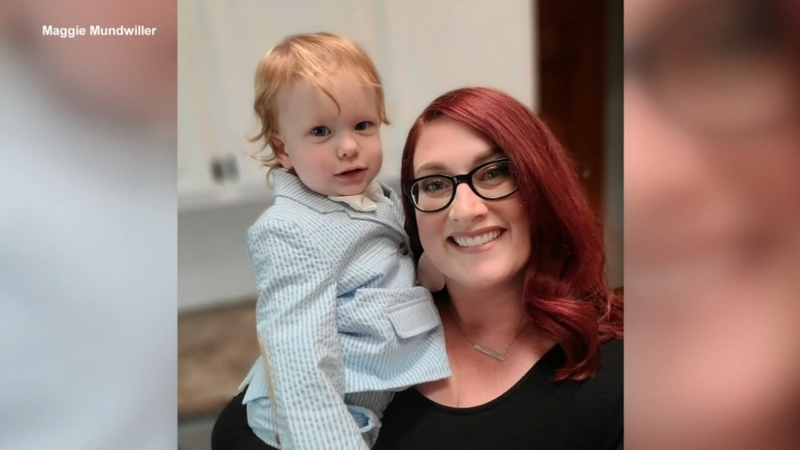 A St. Louis County mother's TikTok video is now at the center of new conversations surrounding access to childcare.

Suited up and with a resume in hand, 1-year-old Mylo Mundwiller joined his mother, 38-year-old Maggie Mundwiller, on her job interview last Wednesday. Mundwiller documented the whole journey with a compilation of videos on TikTok.

"I knew people would relate to it; I just didn't quite know how many," said Mundwiller. "Now I think we're probably (at) almost to 8 million views, which is insane and awesome."

People are taking notice of this man's TikTok video.

Six weeks after Mylo was born, Mundwiller says she was laid off from her job. Since, she has struggled to find work during the pandemic while also taking care of her newborn.

"A lot of people are not able to pay for the childcare if they're unemployed even if there is one parent that is employed," she said. "You have so many other bills that you have to pay for."

Mundwiller recently interviewed for a new job position, but then she got a last-minute call to go in for a second interview. At the time, her husband, older son and the rest of her family were unavailable to watch Mylo while she attended. She thought she would have to forgo the opportunity to interview.

"I was just honest and let them know that I wasn't able to have childcare, so I may need to schedule it for another time. So, immediately their response was, we're child friendly. So, I just let them know, okay we'll be there in a few hours and Mylo will be interview ready."

Mylo's resume, she said, was an added touch.

"Hopefully make a good impression and make light out of a situation that's a little bit different than what we're used to," she said.

A January 2021 Pew Research study says about half of employed parents with children under 12 say childcare responsibilities have been difficult to handle during the pandemic. Working women were also more likely than men to reduce their hours and not feel like they were giving 100 percent on the job.

A four-year-old Instagram star from Philadelphia may have made up the song of the year... and it's only January!

Mundwiller says this video sheds light on the struggles families like her have faced.

"It feels exciting, it feels scary. It feels wonderful to be able to give people a voice," said Mundwiller. "Hopefully employers all over will start listening to this conversation and read the comments."

Comments all over her TikTok are now calling for more employers to normalize child friendly offices or offering childcare access.

"It's just such an important thing to continue this momentum to talk about it, hopefully be better as a country," said Mundwiller.

Mundwiller says she did get offered the job and plans to post Tik Tok updates about it and highlight her journey as a working mom.

"You can tell that there's just so many people that relate and there hasn't been a voice for them, and so I feel like finally there's a voice for people who are struggling in the same way that I have been," she said.
Report a correction or typo
Related topics:
family & parentingviral videojobs hiringsocial mediatiktokjobsviral
TOP STORIES
El Milagro workers 'unlawfully' locked out after walking off job
IL reports 3,304 COVID cases, 40 deaths
Jelani Day's family looking for answers after ISU student found dead
'The View' hosts test positive for COVID moments before VP interview
CPD add extra patrols at several schools after string of threats
Windy City Weekend has what you need to know for the weekend
Video released of incident between cop, Black woman at North Ave Beach
Show More
Slain woman Gabby Petito's boyfriend indicted for bank fraud
Man shoots at armed carjackers in Hoffman Estates, police say
3 dogs found safe after doggie daycare transport van stolen
Roz Varon's Weekender Report
Chicago Weather: Cool start, clear skies Friday
More TOP STORIES News