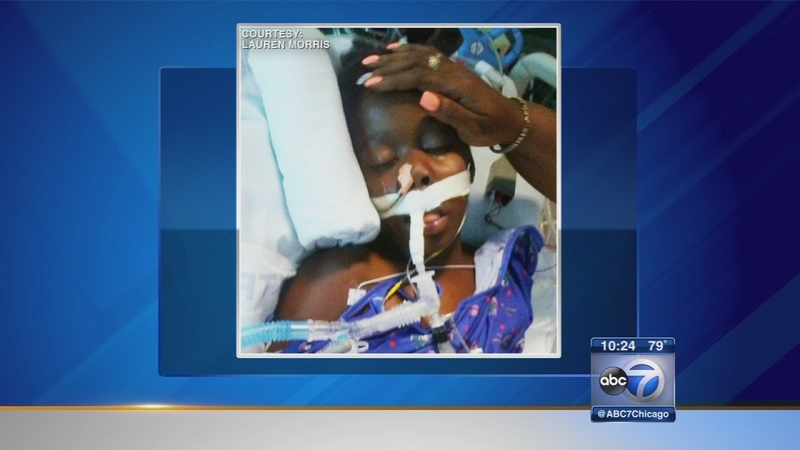 CHICAGO (WLS) -- A 6-year-old girl wounded in a drive-by shooting on the city's South Side is recovering as police search for the gunman.

Tacarra Morgan was shot in the stomach Tuesday afternoon when someone inside a white SUV fired 43 bullets into a crowd near West 60th and South Paulina streets in Chicago's West Englewood neighborhood, police said.

Chicago police are searching for the person who wounded a six-year-old girl in a West Englewood shooting.

Tacarra was rushed in critical condition to Comer Children's Hospital, where she underwent surgery Tuesday afternoon.

"We ran. I didn't even know my daughter was shot. That's how strong she was. She ran in the house. The only thing she said, 'My stomach hurts,'" says Carolyn Morris, Tacarra's mother.

Morris said that Tacarra is now breathing without assistance and sitting up. She says her daughter is resilient; When her breathing tube was removed her first words were: "Mom, I'm ready to go home." She also had a lot of visitors on Wednesday - including Mayor Rahm Emanuel.

"This beautiful child shot in the stomach because a bunch of thugs are shooting at a bunch of other thugs," Emanuel said. "What are these gangbangers doing on the streets of the city of Chicago?"

Police officers are looking at video shot at the scene as they appeal to the community for information.

Now CPD is determined to find those responsible. Detectives are poring through video and working aggressively to gather community intel.

"If we don't get organized, there is another child that will get shot," said Chicago Police Area South Coordinator Glen Brooks.

"I would be willing to take a bet - I would guarantee you - that when we find those individuals we're going to find that they had prior contacts with the police," said John Escalante, First Deputy Superintendent, Chicago Police Department.

Wednesday night residents from West Englewood poured into the street, outraged by the shooting.

The CPD's "Operation Wake Up" meeting at 60th and Paulina began at 7 p.m. Wednesday. Tacarra's mother and grandmother were in attendance. A vigil was held at the meeting, so the community can pray for the girl's recovery.

"The community got a bigger job than the Chicago Police Department. You've got a job to serve your community and protect your kids," says community leader Andrew Holmes at the vigil.

"I want people to know if you know anything, please come forward and tell who shot my baby because my baby didn't deserve this," Morris said.

Mother of 6yo Tacarra Morgan, who was hit by stray bullet while on porch, asks for public's help. pic.twitter.com/G1aE0FAQL5

Tacarra's family set up a GoFundMe campaign to help pay for her treatemnt. CLICK HERE to make a donation.