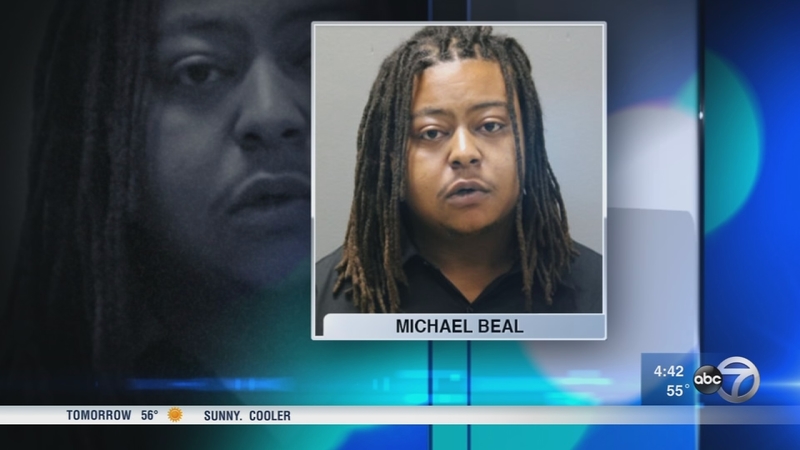 Brother of man killed by police appears in court

CHICAGO (WLS) -- Protesters clashed again in Chicago's Mount Greenwood neighborhood on Tuesday over the police shooting of Joshua Beal, just hours after his brother appeared in connection with a dispute that led to the shooting.

Beal's brother appeared in court on Tuesday. His bond was set at $500,000 and his next court date is set for November 14.

Michael Beal, 28, was charged with aggravated battery, resisting arrest and attempting to disarm a police officer.

Beal and his brother, Joshua, were leaving a funeral with other family members in the Mount Greenwood neighborhood when investigators say they got involved in a road-rage incident with an off-duty firefighter and a police officer.

Joshua Beal was killed Saturday afternoon after the dispute.

Michael Beal was arrested Saturday for what he allegedly did after his brother was shot by police officers.

"I don't think there is enough sympathy to go around for this family," said Barry Spector, Michael Beal's attorney.

The family had been leaving a relative's funeral Saturday afternoon when an altercation with off-duty police officers escalated to shots being fired.

Cellphone video, shared widely online this weekend, shows a 25-year-old Indianapolis man holding what appears to be a gun before he was fatally shot by a Chicago police sergeant.

Prosecutors allege Michael Beal attempted to get the gun his brother had dropped and wrestled with an off-duty officer, choking the officer.

Beal's attorney contends the confrontation was with officers not-in-uniform and there is more to be revealed.

"The bond was set at $500,000, which I think is extremely high for someone with no background. Charged with two probation-able felonies in the unlikely event he were convicted," said Barry Spector, the attorney for Michael Beal.

As the shooting is being investigated by IPRA, Police Superintendent Eddie Johnson spoke to a group of ministers from the Leaders Network about proposed changes to the department's use of force policy.

"I think a lot of time people want to see change quickly and it's more important for us to it right than to rush the process," said Chicago Police Supt. Eddie Johnson.

"Professional police officers should know how to come into an area and calm things down rather than throwing gasoline on the fire," said Rev. Ira Acree of the Greater St. John Bible Church.

"We think there is great need for dialogue, great need for transparency, and we know it's not just up to the police. There are some community things that need to happen," said Rev. Cy Fields of the New Landmark Missionary Baptist Church.

The two Chicago officers involved in the incident are on administrative leave.
The incident sparked clashes between two groups near the site of the shooting.