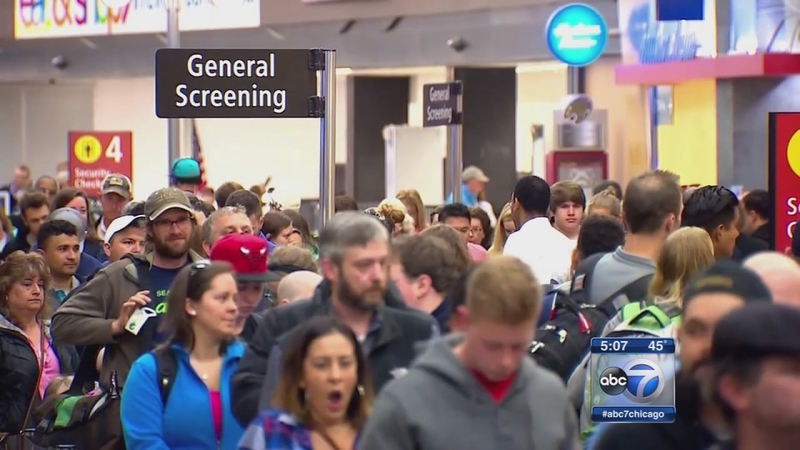 CHICAGO (WLS) -- There were more long lines at both Chicago airports Saturday as the TSA warns travelers to show up three hours before their flights.

The TSA is telling passengers that help is on the way, but for many, it can't come soon enough.

From O'Hare to Midway, security lines at Chicago's airports this morning were once again out of control and hundreds of people deep.

As the summer travel season gets underway, TSA's inability to process people quickly has become painfully apparent not just in Chicago, but at airports all over the country. And it's not just travelers who are frustrated - so are the airlines.

"We don't think that efficiency and effectiveness in screening needs to be mutually exclusive. We think that you can be both efficient and effective as you screen people, and that's really what we'd like to see," said Jean Medina, senior vice president of Airlines for America.

Homeland Security announced Friday that starting in June, the agency will hire 768 new officers to expedite screening. But will they be trained in time to provide relief over the next few months?

"They should have them now. Train them now," traveler Darlene Ronan said.

In the interim, TSA is trying to encourage frequent fliers to sign up for PreCheck, a program which - for a fee - allows people to go through an expedited security line once they undergo a background check. But not everyone is buying into it.

"I think it's a marketing thing to get people to purchase going through a priority area. That's what I don't like," traveler Ella McKinnes said.

Until TSA can get more screeners hired and trained, PreCheck is the only alternative to arriving at the airport two to three hours in advance - which is what TSA is recommending at most large airports.