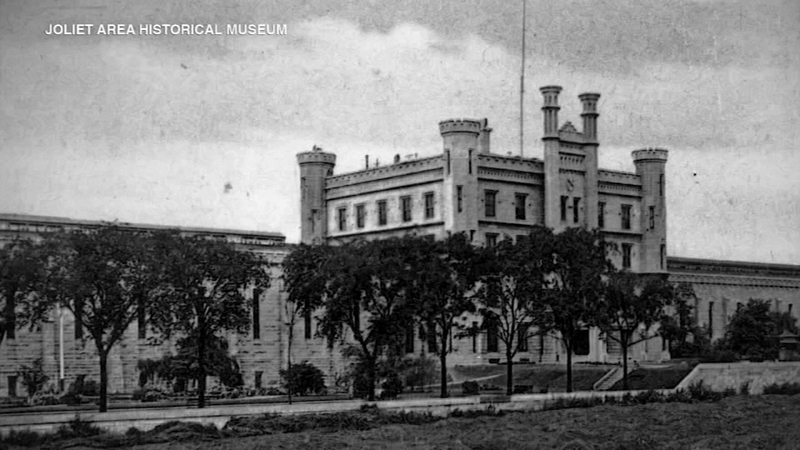 CHICAGO (WLS) -- It was a prison for nearly 150 years and it's been a target for vandals, but now a popular landmark in Joliet has found a new purpose in its old life.

The Old Joliet Prison was built before Lincoln was president. Its look is medieval and intimidating. For 144 years it was the unhappy home of many a hardened criminal. Then in its later years it became a set for prison-themed television and movie productions, including the Blues Brothers.

Thirty-eight years after Jake left Joliet prison, ABC7 went in. Time has not been kind to it. In the East Cell Block, peeling paint hangs like stalactites. Vandals have wreaked havoc. Arsonists torched several of its two dozen buildings. Prison grounds were being swallowed by nature. But the Joliet Correctional Center, closed by the state in 2002, has never lost its power of fascination.

"I just think there's this allure of the forbidden, of what's behind those walls. There's just this psychological need to peer behind those walls to see what's going on," said Greg Peerbolte, Joliet Area Historical Museum.

To that end, the old prison has a new calling, one in the works for many years. In August the Joliet Area Historical Museum will begin hosting $20-a-head walking tours of the Old Joliet Prison.

Go behind the walls; and why not? Routinely, visitors from all over the world show up outside, drawn to see it.

"Every day or weekend we're here, there are hundreds of people coming through. It hasn't been opened or advertised, so I think it's going to be significant," said Joliet Mayor Bob O'Dekirk.

Tuesday night the city of Joliet set aside $50,000 in seed money for the prison tour effort, but what has preceded that has been thousands of hours of community-donated labor and material to spruce up a piece of history that needs a lot of work.

Still, the history is here, where prisoners in striped garb once walked in lock-step, where some were placed in isolation. That cell house, today, has a painted message on the floor, thinned by time: "It's never too late - to mend."

There are many sections of the prison so beaten up that rehab may be out of reach, but even some few the wreckage is being repurposed into salable prison art.

"It's the Old Joliet limestone. It's the stories, the stuff you read online. It's the guards. It's standing in here thinking, 'My god, what did people go through here,'" said Sue Regis, artist.

A century ago who would have imagined that a tough prison would one day become a tourist attraction? Its proponents believe the tours will grow because of that "allure of the forbidden." The walls have stories to tell.
Report a correction or typo
Related topics:
societyjoliethistoryprison
Copyright © 2022 WLS-TV. All Rights Reserved.
TOP STORIES
10 shot, 2 fatally, on Near North Side
13-year-old carjacking suspect critically injured in police shooting
City Council to take up ordinance on curfew changes
Marine veteran seriously injured in Irving Park hit-and-run
PGA Championship picks, predictions with ESPN Chicago's Randy Merkin
Teen shot and killed in vehicle on Far South Side ID'd by ME
Motorcyclist strikes, kills man crossing street on NW Side, police say
Show More
Celebrate National Streaming Day with Hulu for $1/month for 3 months
CTU votes for new president
Disney celebrates National Streaming Day with drone show over DTLA
City Council committee to vote on NW Side casino plan
Oakbrook Terrace fights back after red light camera permit revoked
More TOP STORIES News