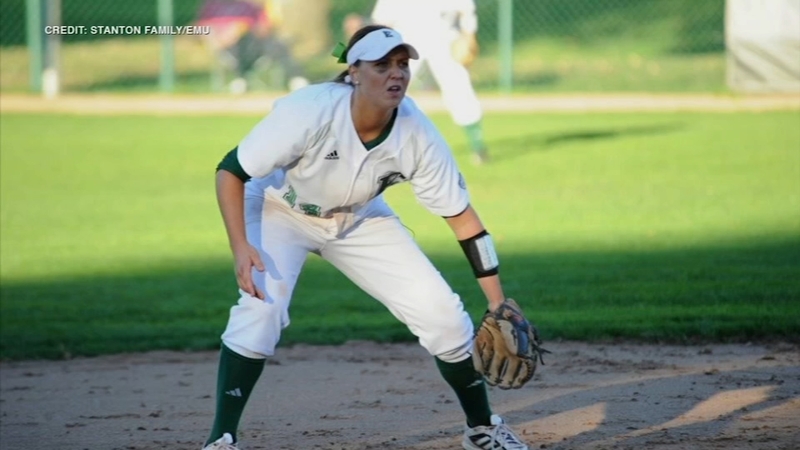 Amanda Stanton, 26, was found dead on a rural stretch near Plainfield Road and Plainsman Court at about 2:26 p.m., the sheriff's office said.

Stanton was attending a wedding at Gaylord House about a half a mile down the road on Saturday. It was immediately unclear what time she may have been hit.

Stanton was the head softball coach at Oswego High School for the past three years, according to district officials.

"Amanda was one of the best and brightest young women I have had the honor to work with and mentor; she had so much to offer and will be missed by all that were fortunate enough to know her," said Athletic Director Darren Howard, of the Oswego Community Unit School District 308.

Stanton went to Eastern Michigan University and played softball in Lockport and was hired right out of college to coach softball at Oswego High School. They hadn't had a winning season in 22 years and she turned it around in just three.

Monday night a group of girls gripped roses in a tight huddle around home plate on the Panthers' softball field in Stanton's memory.

"I think they just liked how she was young so they could relate to her, how enthusiastic she was about being a coach," said Sam Bolander, Oswego baseball player.

Her boss said she was made for the job.

"She brought a winning strategy to the high school this year," said Ken Jahnke, softball coach.

"I hired her with no coaching experience just because she had that it factor that you rarely see in young coaches," said Darren Howard, District 308 Athletic Director.

"We grieve as a community as friends and family and play the rest of the season for her," Jahnke said.

Also, for the past two years, Stanton worked as a math interventionist at Jefferson Junior High School in Naperville, where counselors will be provided for students and staff from 2 p.m. to 4 p.m. Tuesday and Wednesday this week.

"Amanda was positive, energetic and a true Patriot. She will be greatly missed by all," said a message to Jefferson parents from Principal Megan Ptak.

Anyone with information is asked to call the Kendall County Sheriff's Office at (630)553-5856.

A woman was found dead Sunday after a hit-and-run crash near Oswego, the Kendall County Sheriff's Office said.