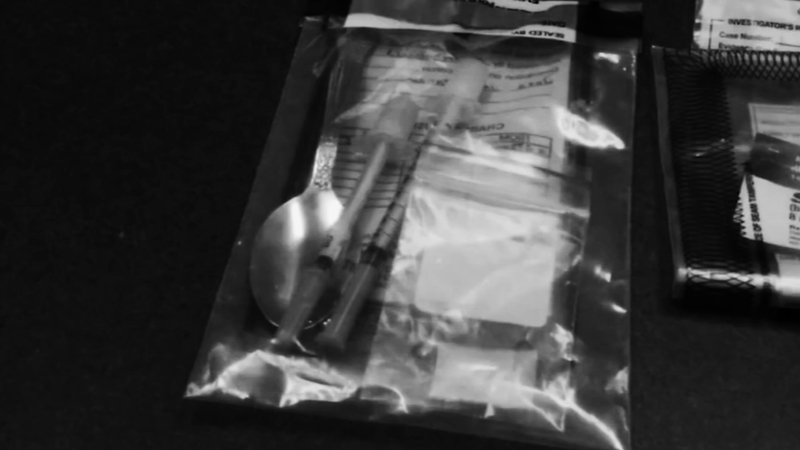 CHICAGO (WLS) -- During the first half of 2020, the United States set a record in drug overdose deaths. It's a companion crisis - the scope hidden by the focus on the enormous number of COVID-19 deaths.

And, according to an I-Team analysis, there were record-setting drug overdose deaths across metro Chicago. Those startling statistics, according to experts, will only get worse.

For one family, the ongoing drug crisis is already becoming a heartbreaking reality.

"I always was very realistic really every day, that this could be. This could be Cormac's last day," said Maggie Burke.

We met her son Cormac in November of 2019 while reporting on a suburban sober home. At the time, Cormac told the I-Team he felt good living at the home, but a year later he relapsed and had to go back into treatment.

His mother said her son waged a nine-year mental health battle that began when he was 14 years old. Drugs became a way to numb his pain.

"He really fought to love himself and he came from love. He came from nothing but love and there were so many championing for him," said Burke.

Last year on June 18, not long after turning 22 and getting his own apartment, Cormac Burke's body was found in a field in suburban Lombard. He suffered a deadly overdose of methamphetamine and other stimulants.

"Nationally, methamphetamine overdose deaths are up by about a third. In Chicago, in this region, deaths are up not to that level, but they are ticking up," said Bob Bell, the Special Agent in Charge of Chicago's federal drug enforcement office.

Bell said the pandemic did not slow drug cartels from producing and trafficking.

Mexico's Sinaloa Cartel - still run by several sons of convicted druglord "El Chapo" Guzman - had a lock on the meth business here for years. But authorities say it's now being shared by the New Generation Cartel, overseen by the kingpin known as "El Mencho", considered Chicago's most wanted fugitive.

"So much meth is coming in and it's easier for the cartels to just use the traditional smuggling and transportation routes that they use for other substances like cocaine, heroin and fentanyl are to commingle the methamphetamine with these other substances," said Bell.

Meth is just one part of the problem as stronger street drugs are now being mixed with powerful illicit substances.

For 12 months ending May 2020, more than 80,000 people in the U.S. died of a drug overdose. According to the CDC, that is the largest number of fatal drug overdoses for a 12-month period ever.

"I'm really fearful about what that number may be for calendar year 2021, and we have our work cut out for us," said Bell.

Cook County - including Chicago - marked 2020 as the deadliest year for opioid overdoses. Those numbers are troubling to Dr. Ponni Arunkumar, the Chief Medical Examiner for Cook County.

"Suddenly, the numbers have gone through the roof basically," Arunkumar said. "They're not just one single drug. We're seeing combinations of drugs, most have fentanyl in them and causing death."

The highly potent and dangerous painkiller fentanyl is responsible for 83% of those deaths. The latest numbers confirm more than 1,700 opioid overdose deaths last year but with 360 pending cases the medical examiner expects the number to reach or exceed 2,000.
That is about a 55% increase from the previous year.

African Americans are being disproportionally affected - making up at least half of those deaths, even though they're less than a quarter of the county's population.

"That's disturbing and especially when you look at that over time. It didn't used to be that way. It grew rapidly, and it grew exponentially," said Kathie Kane-Willis, the Research Director at the Chicago Urban League.

Kane-Willis has been studying the opioid epidemic since 2006 and has sounding the alarm on the increasing numbers for years.

"It's not a steady increase. It's almost like, in a two-year period, who was dying in Illinois the fastest rate, you know, change in the population of who is dying ... when you see something like that occur, you have to look at your social service delivery and think about, you know how you're going to save the lives of this population," said Kane-Wills, who wants dedicated resources to help understand what is happening in the Black community.

The spike in deaths started before the pandemic, but some experts believe COVID-19 complicated the overdose crisis.

Needed social services were temporarily halted and treatment was forced to go virtual. While it may have been helpful for some people, for many others, the stress and social distancing proved deadly.

The I-Team contacted coroners from nine counties. Most saw a jump, but none as dramatic as Cook County. In DuPage County, the coroner called the increase in deaths "alarming" - rising 17% from 2019.

Maggie Burke doesn't think the COVID pandemic played a role in her son's death. She said his life was fragile each day of his journey- a struggle she said her family never kept hidden. She wants to erase the stigma of substance use disorder.

And, when she talked with Chuck Goudie she told him she was speaking out to give voice to her son's life. She said he wanted people to know that those who are struggling with addiction are just ordinary people.

"I'm not a bad person, you know, I'm a normal human being that struggles with something," Cormac Burke told the I-Team in 2019.

As Cormac Burke struggled, his mother recalls telling him: "Cormac: There is power in your story."

Cormac's battle with addiction and his death illuminates the struggle that so many have with mental health and addiction and lays bare the reality this is not a one-solution problem.

The Centers for Disease Control and Prevention recently asked healthcare providers to consider ways to:

- Distribute and use more naloxone, an antidote for reversing the effect of overdoes
- Expand education programs for overdose prevention
- Increase access to treatment for substance use disorder.
- Identify and help those at highest risk for overdose.
- Watch for overdose outbreaks and launch more effective responses.

The Burke family says so many people helped him in his journey they wanted to pay it forward in the spirit of Cormac's compassionate heart with a scholarship fund in his name.

American Medical Association Issue brief: Reports of increases in opioid- and other drug-related overdose and other concerns during COVID pandemic