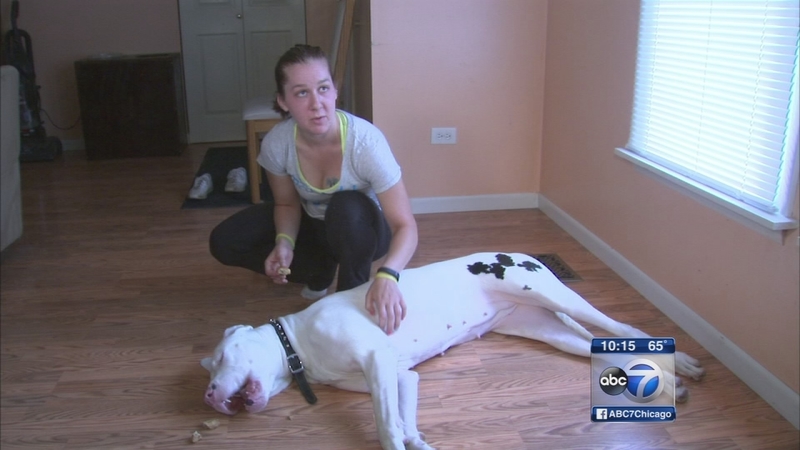 CHICAGO (WLS) -- The ABC7 I-Team is investigating allegations of abuse from one woman who says her puppy had to be treated for serious injuries after being at local dog training facility.

According to one veterinarian, the puppy had "swelling" and "physical changes" to her head.

The dog's owner says she noticed the injuries the moment she went to visit her at the training facility.

Brazil the Great Dane has always been deaf - but her owner Marcy Mortensen and her vet say her sunken eye developed after Brazil suffered fractures to her nasal bone.

Mortensen says she noticed the injuries when she went to visit Brazil at the Chicago Canine Academy during a month-long boarding and training program.

Her puppy was about 12 weeks old at the time.

"She was spinning in circles on the floor, couldn't find out where she was. And the fact that her face was so swollen just on one side. And she smelled me, but couldn't find me. I walked up to her and she was just running into things trying to come and find me," Mortensen said.

Mortensen says she immediately removed Brazil from the Chicago Canine Academy and brought her to the veterinarian. A report from that vet says: There were physical changes concentrating on her head. Swelling and fractures to her left nasal bone, an abrasion on her jaw. Her upper teeth traumatized and infected. The vet letter recommended that "the owner report the trainer for suspected animal abuse."

"She was on pain medication for a month because her face was swollen," Mortensen said.

Chicago's Animal Control is now investigating. Mortensen also has filed a lawsuit in small claims court asking for $7,500 to cover court costs, medical bills and lawyer fees. Mortensen called the I-Team because she says the business was ignoring her.

"They don't want to say anything, and now we're in the process of court. And they're trying to dismiss it as if nothing ever happened," Mortensen said.

On the phone, Jim Morgan, the owner of Chicago Canine Academy, told the I-Team that an employee who he says no longer works at the facility was to blame. But he wouldn't comment any further. His attorney also told the I-Team no comment, so we stopped by to try to get more answers. His business door was locked and he refused to come outside.

Melissa Klett form the Anti-Cruelty Society says before you hire a dog trainer, you should get referrals from your vet, meet with the trainer and visit the facility for a day. Then watch how your dog reacts to the trainer.

"Someone who doesn't fly off the handle, someone who handles frustrations well who doesn't get easily frustrated and lose patience with the dog," Klett said.

Mortensen and her vet say Brazil had always been "calm and easy to approach" but was "subdued, timid and flinched" after returning home from her trainer.

"The pain is horrendous; that somebody could do that to a dog, especially a 3-month-old puppy," Mortensen said.

The Anti-Cruelty Society says you can also check a trainer to see if he or she is licensed by the Certification Council for Professional Dog Trainers. This is not a required license but experts say it could help guide you in making the best choice.

The owner of the training facility in our story is not certified with that group.