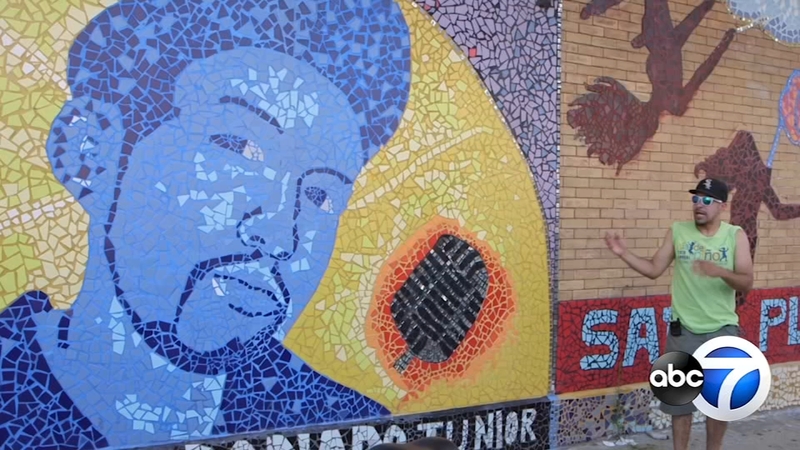 CHICAGO (WLS) -- For the West Side neighborhood of Pilsen, murals are central to the neighborhood's identity and its largely Mexican community. As development changes the physical landscape and demographics, residents are working to ensure that their art is preserved and respected.

"Going back since right after the Mexican Revolution, murals have been used to tell the story of the Mexican people," said Luis Tubens, director and co-founder of Pilsen Public Art Tours.

Tubens founded his organization with another art educator, Jose Guerrero, to help document the neighborhood's rich collection of murals.

"I use the murals like a pop-up book," Tubens said. "We are literally characters inside this book, and the murals are illustrations. I am just the text."

The first stop on many tours is the home of painter Hector Duarte, who covered the outside of his home with a re-interpretation of Gulliver's Travels.

After immigrating from Mexico decades ago, Duarte dedicated himself to becoming part of Pilsen's murals scene.

As he spoke with ABC 7 about his own work, graffiti writers Kozmo and Macias Tatuaje created a new Mexican mural just down the street. Theirs featured depictions of ancient Aztec mythology and imagery, including Mexico's coat of arms: an eagle eating a snake, while perched on a cactus on top of a lake.

About a mile away, another of the area's new murals faces El Paseo community garden, which could soon mark the start of a walking trail from Pilsen to Little Village.

"The city would like to see a lot of public art on the trail," said Paula Acevedo, co-director of the community garden. "The importance of our piece here is kind of to create the first mural, the first public art, and what it should look like."

Acevedo facilitated community discussions around the content of the mural, called "El Abrazo" or the hug, which is two-thirds complete. It depicts the agricultural and industrial contributions of Mexicans to the United States.

But gentrification and development in the neighborhood has meant the removal of some iconic public art. And two years ago, a series of original Pilsen murals from the 1960s were destroyed by a new developer.

"A developer came in, renovated the building, the whole inside. The murals were gone. And the outside were the ones that he painted over," said Raymond Patlan, the painter behind the Casa Aztlan murals.

"The community really felt a loss and protested. And he (the developer) asked me if I could redo them. And I said, 'Sure, if you have the money, I have the time. I'll make the time.'"

That developer heard community concerns and put forward the funding for Patlan to restore his mural - while also promising funding for local arts programs for kids. But Duarte worry that new developers won't take the same approach.

Sitting in the heart of the neighborhood, the National Museum of Mexican Art has always been one of the strongest financial backers of Pilsen murals. For the museum's director, Pilsen public art is central to the institution's own identity.

"A lot of the arts world thought that - for us to create a museum in a working class community, an arts museum, and for it to be free - it ain't gonna work. Well, they were wrong. Here we are," said director and founder Carlos Tortolero, laughing.

Tubens's own journey in Pilsen-based art education started when he worked at the museum. For him, the murals each hold their own stories and meaning that he is eager to share.

"The murals have helped me search for my own identity, ever since I started working for the National Museum of Mexican Art," Tubens said. "And I just want to be able to educate the public on their story and on what they have to say."

******
To schedule your own group tour of Pilsen's public art, visit ppat.space.