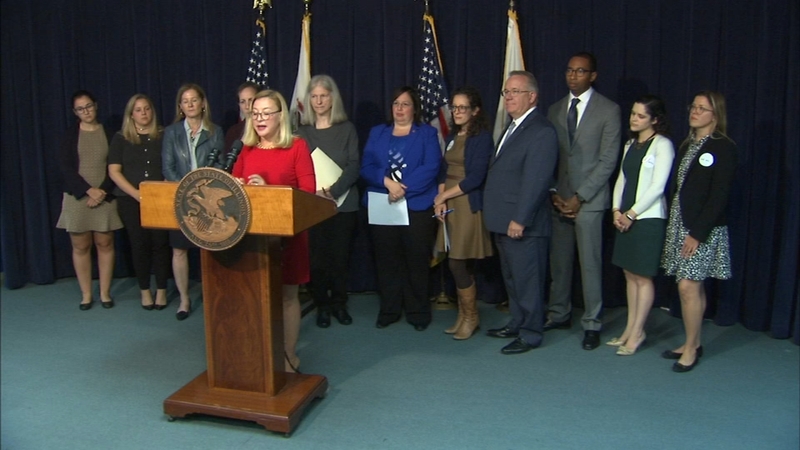 SPRINGFIELD, Ill. (WLS) -- Governor Bruce Rauner is under fire for his veto of a bill that would have tightened up the state's equal pay law by prohibiting companies from asking someone salary history

Some Democratic lawmakers said that decision will cost the governor a lot of support come Election Day.

The governor vetoed a similar bill last year but this time used an amendatory veto to rewrite the bill.

HB4163 bill is intended to help women narrow the wage gap that pays them, on average in Illinois, 79 cents for every dollar a man earns. The governor's veto was seen by some as a slap in the face.

"Governor Rauner, in vetoing this bill a second time in two years, has shown who he really is: an out of touch and failed governor who cares very little about the economic welfare of women and families in Illinois," said State Rep. Anna Moeller (D-43rd District), one of the bill's sponsors.

She and other lawmakers vowed to override the governor's veto in November.

In his veto message Rauner said, "I am committed to eliminating the gender wage gap and I strongly support wage equality. I noted in my prior veto message that Massachusetts already has established a best-in-the-country approach to the issue of employers inquiring about salary history. I recommended that Illinois model its legal regime on Massachusetts' model. Unfortunately, legislators again refused to push forward a bipartisan approach that properly balanced the interests of the business community."

An attorney who does work for the Illinois Chamber of Commerce, which opposed the bill, said it was too restrictive on businesses in the factors that can be used to set someone's salary.

"So if you wanted to say a bachelor's degree is a requirement for this job, since education is not one of the listed items in the bill, that would have to be the only basis for setting the pay. So you couldn't use seniority or someone's experience or years and ability you could only use education," said Sara Zorich, partner at Smith Amundsen.

But critics said the governor's veto makes it easier for employers to get away with discrimination as long as they are working to make progress in eliminating the wage gap.