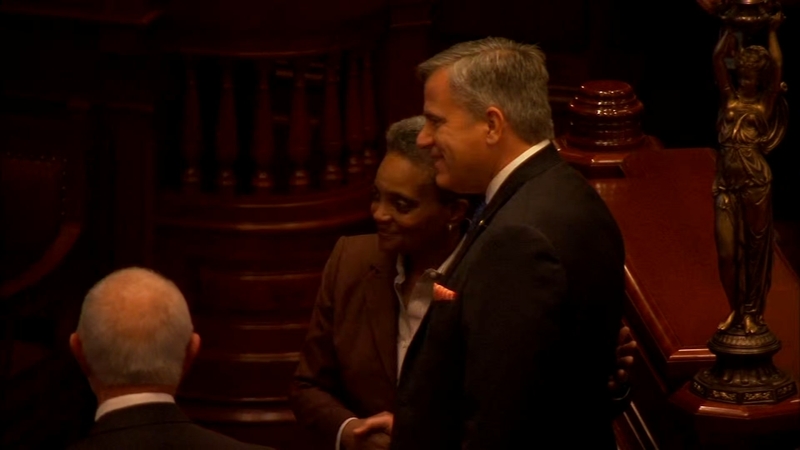 CHICAGO (WLS) -- Mayor-elect Lori Lightfoot made her first visit to Springfield Wednesday, shortly after announcing her transition team, including one of her formal rivals.

At the state capitol, Lightfoot met with Governor JB Pritzker and began the work of forging relationships with state lawmakers.

Pritzker and Lightfoot met behind closed doors for nearly 40 minutes to discuss legislative process and other issues. The mayor-elect said the meeting was very productive.

"You know he's a very, very good, open guy, no nonsense, so we have a lot of things that obviously we need to be aligned on and we started talking about some of those issues today," Lightfoot said.

She then had a short meeting with House Speaker Mike Madigan, and though she had campaigned against the machine during her run for mayor she said she is ready to put that behind her.

"I want to make sure we have a good working relationship and an open line of communication," she said.

Lightfoot got a warm reception in the Illinois House, greeting a long line of representatives. She also had an opportunity to extend an olive branch to downstate members of the House who in many cases are very distrustful of anything Chicago.

"Working together regardless of party or geography, I see opportunities ahead for all of us. I-80 is just a stretch of pavement, it is not a border," said Lightfoot.

The mayor-elect's meet and greet with lawmakers also included Chicago Rep. Robert Martwick. The two put aside differences from when he crashed a Lightfoot news conference during her mayoral campaign.

"I look forward to working with her, and I mean the city is going to have some immense challenges over the course of the next four years, she's got a big job and I told her anything I can do to help, I'll be there for her," Martwick said.

Lightfoot also met with House Republican Leader Jim Durkin, who said she struck the right tone with her speech to house members.

"I will work with Mayor Elect Lightfoot in matters that are important to her, and she brought up issues about pensions, infrastructure, public safety and those are things that I've worked with Chicago on over the years and plan to do the same," Durkin said.

Thursday Lightfoot will meet with Senate leaders and address members from the State Senate floor.

"I'm proud to announce that this diverse group of leaders from across Chicago will be co-chairing our transition," said Lightfoot. "It is a mix of experienced professionals who have worked long and hard for decades on the most pressing issues facing the city, and new voices bringing fresh perspectives."

Lightfoot said she is also planning to create a Young Advisers Committee aimed at encouraging multiple organizations across Chicago to share their priorities. The idea is to give input to their other committees on how the policies being considered may impact and can be shaped by young people.

"These leaders demonstrate innovative thinking and problem-solving skills in their fields of expertise, and I am excited to work with them to build a stronger Chicago," said Lightfoot.