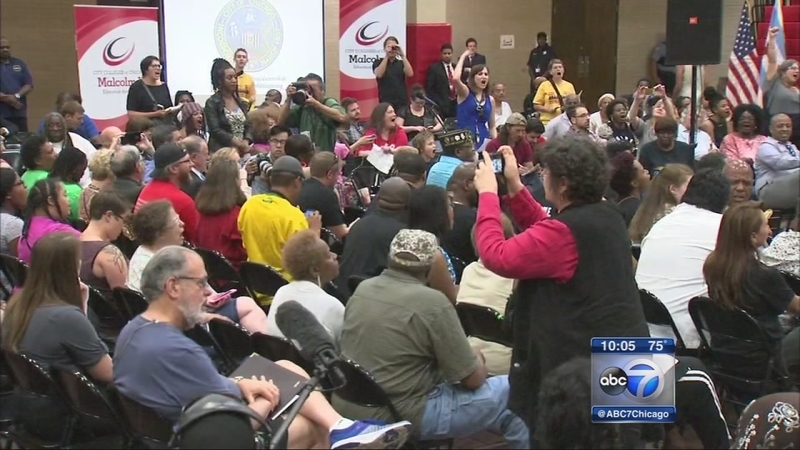 Residents were given the chance to pitch Emanuel on ways the city can raise $754 million to balance the budget. The mayor took heat for many issues, including city schools and unemployment in minority neighborhoods.

Emanuel said he wanted opinions, and he got them. Lots of them.

"Do we want to thank the mayor and all these hand-picked dummies that say they represent us?" said one attendee. "I don't have a grocery store! I don't have a quality school!"

"Why do we have no librarians in a public CPS school but two full time police officers?" asked another.

"The question I have for the mayor is: Where's our money?" asked yet another.

Mayor Emanuel's return to public budget forums for the first time in four years was meant to prepare voters for hard realities like possible garbage collection fees, e-cigarette taxes and the possibility of a property tax hike without pension help from Springfield. Instead, he was often interrupted by hecklers when laying out future plans.

Emanuel seemed to take it in stride, though, saying at one point, "That's okay, I have three teens at home, I'm really okay with this.

Some in the crowd looking for substance on serious issues left disappointed.

"It's a step in the right direction to do a public hearing but what happens when you have a culture of not having a transparency level I think is needed in the city, people come and they are pent up and express that frustration," said Amara Enyia, a resident of East Garfield Park.

The mayor did acquiesce to a large group of people demanding he re-open Dyett High School in Bronzeville. He agreed to a private meeting which lasted about 30 minutes. City Hall released a statement afterwards that says, "The mayor appreciates there are strong feelings about Dyett, and he understands there is a desire for a quick resolution about its future, however what's most important is the right decision. CPS is engaged in a thorough review of Dyett, and while they are closer to a decision, they continue to weigh all the factors at play in an effort to achieve the best outcome possible - one that will ensure a strong Bronzeville and a strong future for our children. The mayor, along with Forrest, is committed to an open dialogue with community stakeholders as CPS works toward a final decision on this issue. Everyone deserves to have their voice heard, which is why the mayor offered to hold the meeting tonight, it's why he has met with community leaders regarding Dyett in the past, and it's why city leaders from the mayor's office and CPS will continue to have an open dialogue on this issue moving forward."

The second public budget forum will take place Wednesday at the South Shore Cultural Center, and the third will be held Thursday at Wright College.