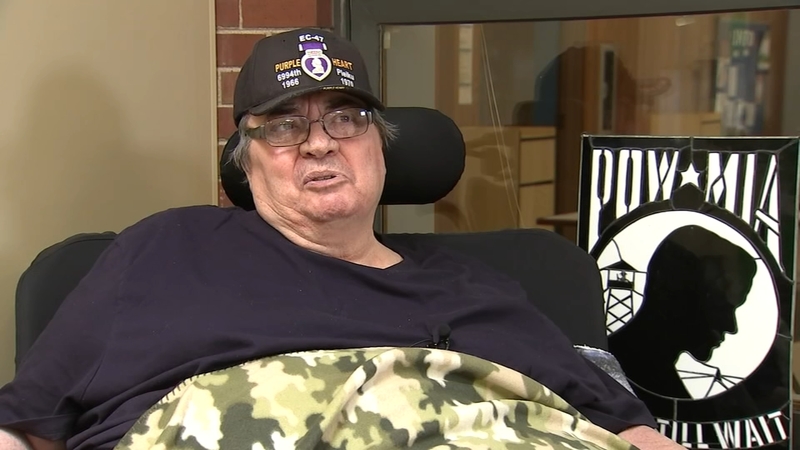 MANTENO, Ill. (WLS) -- On National Purple Heart Day, a Vietnam War veteran is sharing his story of survival after being shot down twice in the same day.

Founded by George Washington, the Purple Heart is awarded to every veteran wounded or killed in combat. It's not subject to favoritism, but to action.

Air Force Sergeant Danny Russell lives in the Manteno Veterans' Home. But he was flying high above the jungles of Vietnam 49 years ago.

"We would let our people know where the enemy was. That way they wouldn't walk into a trap. Or if they wanted to attack them, they knew where to attack them," Russell said.

On April 22nd, 1970, Russell was flying a covert surveillance mission, tracking an enemy when his plane took fire.

"He hit us directly," Russell said. "We lost one engine, the other engine was smoking. And we had to do something real quick."

It was jump out or crash with the plane.

"My buddy and I were standing right there in the doorway. We were hanging 10, ready to go out, but as we looked out, the ground was too close. We were too low to bail out," Russell said.

"The guys that got shot down in enemy territory never survived," Russell said. "So I was thinking, 'Man. Our goose is cooked.'"

The result was mangled metal in fiery wreckage. But Russell and five others survived. He had to run to a bombed out field for rescue in a small helicopter.

"Because they weren't going to land, I had to jump on the skids," he said.

With Russell holding on to the outside, the helicopter took off. When they reached 50 feet into the air, Russell said "they shot the helicopter down. And I thought, 'Well, my bacon's gone. I'm not going to make it.'"

Finally, another helicopter came to air lift him out.

Russell said the Purple Heart is an award that he cherishes not because of something he did, but because of the men who came to save his life.