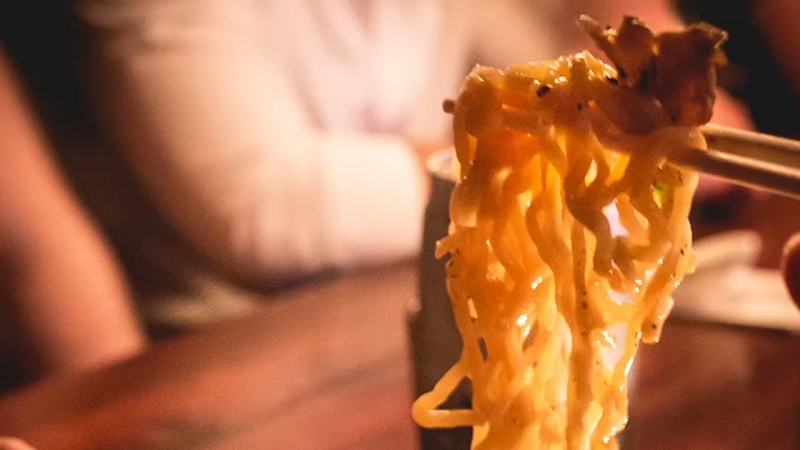 CHICAGO (WLS) -- The Chicago area boasts dozens of ramen shops turning out steaming bowls of the beloved Japanese noodle soup. But this isn't the stuff you get from a packet; these restaurants spend hours, even days, on their broths and noodles.

First, a primer. There are four common types of ramen broth: tonkotsu, a pork bone broth; shio, a salt broth that is often chicken-based but can also be made of fish, pork, other meats or vegetables; shoyu, a soy sauce broth that is also typically chicken-based but can be made of pork, fish, other meats or vegetables; and miso ramen, which is typically pork-broth based and flavored with miso, and originated in the northern Japanese island of Hokkaido, where cold winters called for a richer, heartier soup.

Ramen noodles are made of wheat and can either be curly, like most Westerners are used to, or straight, a style more common in Hokkaido. Diners can often order kae-dama, or an extra serving of noodles to add to their broth once they've eaten the portion that came with their soup.

Here are 10 of the best places to grab a bowl and warm up this winter.

Furious Spoon Ramen - multiple locations in the city and suburbs
With locations in and around the city, Furious Spoon is one of the area's more ubiquitous ramen shops. They offer their take on tonkotsu, chicken shio and traditional shoyu ramen, and offer vegetarian ramen for the non-meat eaters out there. They also sell tsukemen, or dipping ramen, in which diners are given a bowl of noodles and a cup of concentrated broth in which to dip them. All of Furious Spoon's noodles are made in-house using a machine imported from Japan.

High Five Ramen - West Loop
High Five Ramen features two tiny counters and seats less than 20 people, but their ramen packs a serious punch. Located underneath Green Street Smoked Meats in the West Loop, the shop specializes in a tonkotsu miso broth packed with tongue-numbing sweat-inducing spice. You can order the signature High Five ramen in different heat levels, but it's probably best to heed their warning about trying the Kanabo spice: "There is no relief. Kanabo spice is too spicy for most. Please don't order without careful consideration." For anyone not seeking face-numbing spice there are shio, shoyu and maitake mushroom vegetarian options, and frozen cocktails to help soothe the burn of each bite.

Futatsuki Ramen - Uptown
This North Side shop is a quick walk from the Wilson CTA Red Line station and offers only tonaktsu ramen, but what a bowl of tonkotsu ramen it is: rich and topped with traditional pork, corn and nori adornments. The family-run shop is popular among neighborhood regulars and ramen aficionados alike. They're also known for their Japanese curries, fried chicken and pork dishes.

Kizuki Izakaya & Ramen - Wicker Park
Kizuki is the Chicago outpost of a Japanese chain of izakaya, a kind of informal Japanese pub that serves simple, delicious foods and drinks - and, of course, ramen. This Wicker Park restaurant offers nearly a dozen different flavors and toppings, from traditional shoyu and miso ramens to a yozu shio ramen made with French sea salt and a popular garlic tonkotsu variation. They also have vegetarian ramen and tsukemen dipping ramen.

Ramen Misoya - Mount Prospect, Near North Side
Miso, a fermented and aged soybean paste, is one of Japan's most essential and most complex ingredients. White miso is gentle, sweet and perhaps most familiar to Americans in miso soup, but if you let that paste age and darken the flavors become more and more funky and unctuous, producing the indescribable but craveable fifth taste: umami. Ramen Misoya, another Japanese chain imported to the area, specializes in all things miso ramen, and they take advantage of miso paste at three different stages of aging - white, red and black - to create complex, delicious bowls representing different regions of Japan. For a long time diners had to make the trip to the northwest suburbs to enjoy this delicious ramen, but a second shop recently opened in River North.

Ramen House Shinchan - Palatine
Perhaps you side-eye strip mall restaurant recommendations. We get it; it's a roll of the dice at best. But not at Ramen House Shinchan, where the tonkotsu broth is boiled for 15 hours and alongside the traditional tonkotsu/shoyu/shio/miso offerings stands unique Taiwanese ramen, which, as far as we can tell, can't be found anywhere else in the area. The family-run ramen shop is a favorite of locals (who, be warned, line up early for those bowls) and experts; our own Hungry Hound Steve Dolinsky said of the restaurant, "(the) husband-and-wife team have been recreating some of the best bowls of ramen I've had since I ate in Japan a few years ago."

Santouka Ramen - Arlington Heights
There are many pleasures inside Mitsuwa Marketplace, the Japanese market and superstore in the western suburbs, but none of them attract the long lines regularly on display at Santouka Ramen in their food court. The small counter is the only Midwestern location of the Hokkaido ramen chain and offers four kinds of ramen: shio, shoyu, miso and spicy miso, all made with the same pork bone base. They're also one of the only shops give diners an option of three sizes so you can slurp every last noodle and drop of broth no matter how hungry you are. Ramen is also available as part of a combo with three traditional Japanese rice bowl side dishes: negi, rice topped with green onions, fried tofu and dried bonito; shake ikura, rice topped with grilled salmon and salmon roe; and cha-shu, rice topped with pork. They also sell natto, a traditional Japanese breakfast of rice topped with sticky, gooey, whipped fermented soybeans - a very acquired taste for most Westerners. Bring cash and don't worry -- the wait is worth it.

Strings Ramen - Multiple locations in Chicago
Strings opened its flagship ramen shop in Chinatown in 2014, at the beginning of Chicago's ramen explosion, and diners have been flocking there for the fresh, daily-made noodles ever since. All four of the traditional kinds of ramen shine, but many go for their Hell Ramen - a signature Shoyu broth diners can order in five levels of fire ranging from "spicy" to "send help, please" (okay, so it's actually "toukatsu" to "daikyokan," but trust us on this). If you can "suffer through" (their words, not ours!) the spiciest bowl of Hell Ramen and finish it within 20 minutes, they'll pay for your bowl and give you a t-shirt and $50 gift certificate. But don't say we didn't warn you - the Monster Hell Challenge comes with a disclaimer that Strings is not responsible for any health problems that may result from eating that bowl of soup.

Wasabi - Logan Square
Another forerunner of the Chicago ramen explosion - it opened in 2010 -- diners can spot Wasabi's unassuming Milwaukee Avenue storefront by the lines waiting for a table. The restaurant is Chicago's only Japanese-owned ramen shop, and has an extensive menu of classics like traditional tonkotsu and Tokyo shoyu, as well as contemporary variations like spicy roasted garlic miso ramen. They also feature regional Japanese styles not often seen in U.S. shops, like the Hakata and Sapporo ramen. Wasabi is also the only restaurant we found that has a vegan ramen on their menu. The wait for a table or seat their bar can be long, but it's always worth it.