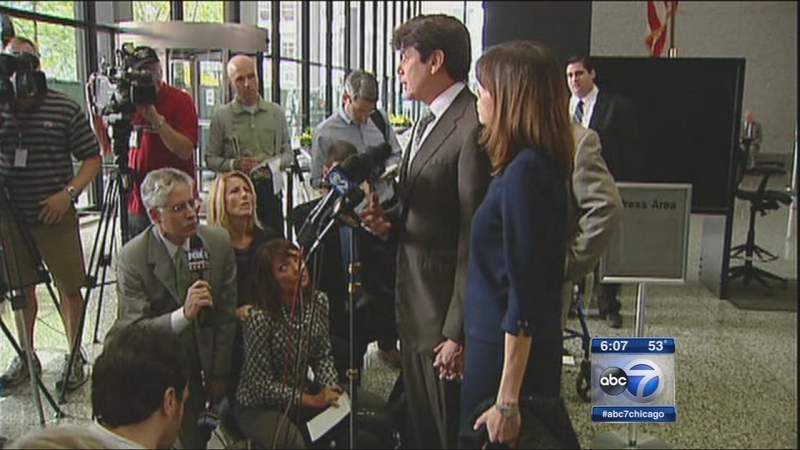 WASHINGTON (WLS) -- Rod Blagojevich got into trouble for seeing a U.S. Senate seat as "[bleeping] golden." Now, for the ex-governor silence is golden after his Supreme Court hopes were dashed, or at least that's the word coming out of Blagojevich's federal prison in Colorado.

A prison official tells the I-Team that the crooked ex-governor wasn't interested in talking to about the U.S. Supreme Court giving notice that justices would not hear his appeal. No comment and no stated dissent.

"He's been a model prisoner, he teaches classes, he helps other inmates, ya know, I think he's done everything he can to try and rejoin his family," says his attorney Leonard Goodman.

Blagojevich hasn't been heard from since the day he checked into the Englewood Penitentiary in Littleton, Colo.

Now his wife Patti, who was a player on the tapes that got the governor convicted wrote that the family is incredibly disappointed that the U.S. Supreme Court declined to hear the case, "but it is not entirely unexpected because of the government's position that the case was not over yet."

Mrs. Blagojevich said that they are hopeful after the governor is resentenced, as a result of a federal appeals court tossing out five of the counts against him, that the highest court may be moved to take the case then.

Resentencing by Judge James Zagel isn't on his calendar yet but could result in a reduction of the 14-year sentence that Zagel originally gave Blagojevich in 2011.

"Judge Zagel may reduce the sentence a little bit if only to take account for the fact that a number of counts were dismissed," says ABC7 Legal Analyst Gil Soffer. "But I wouldn't expect to see anything dramatic because the basic core facts are the same."

A former federal prosecutor, Soffer says the Supreme Court case was basically Blagojevich's last shot at relief and that he should now come to Chicago and throw himself at the mercy of the court.

"It will be better for him to be there if he can come and make the case that he's a changed man, or at least modestly explain the life that he's led and the pain that it's causing his family," Soffer says.

If Judge Zagel's court calendar is correct, Blagojevich's re-sentencing won't happen until the middle of May at the earliest. After Thursday, Zagel is listed as being off the bench until May 9.