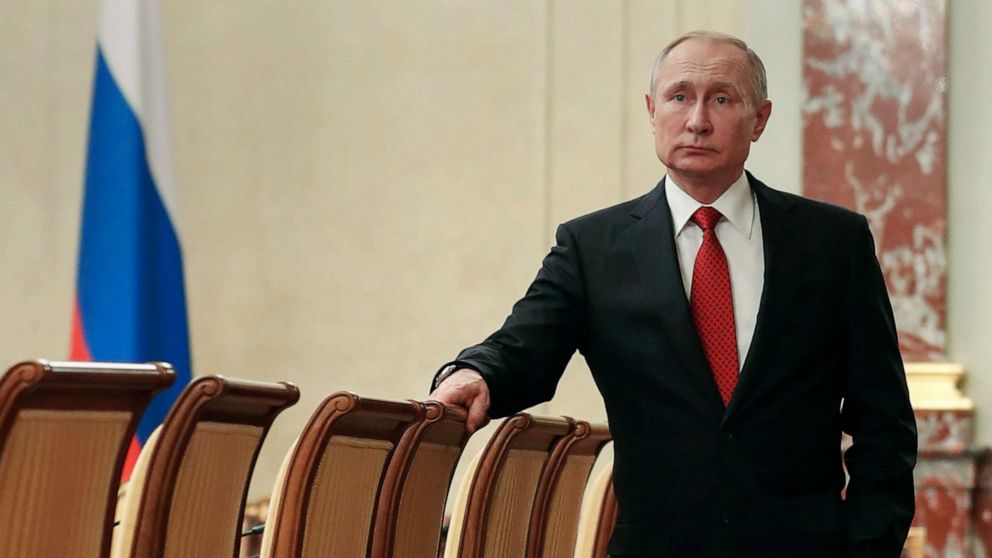 MOSCOW -- Russia's president Vladimir Putin on Wednesday launched a major political shake-up, replacing his prime minister Dmitry Medvedev and proposing a series of changes to Russia's constitution, in what was seen as an attempt to create options for retaining power after his presidential term expires in 2024.

Putin used his annual state of the nation address in Moscow to announce several proposed amendments to the constitution, which would transfer greater power to Russia's parliament and which he said would be put to a national vote.

Then a few hours after the speech, Medvedev announced he and the entire cabinet were stepping down at Putin's request. Putin said Medvedev, a long-time ally who held the presidency for him between 2008 and 2012, will now become deputy chairman of Russia's national security council.

The moves that stunned Russians were immediately interpreted by observers as part of efforts by Putin to prepare for his looming transition in 2024, when constitutional term limits mean he must leave the presidency. At 67, Putin has ruled Russia for two decades and the question of how he will handle the deadline when it arrives in four years time has been growing ever larger recently. In his speech, Putin framed the changes as necessary to give the parliament greater responsibility for policy-making, but in reality experts said the proposed changes seemed designed to open up possibilities for allowing him to stay in power after leaving office and to weaken any successor in the presidency.

Medvedev, who announced the cabinet's resignation while with Putin at a meeting broadcast on state television, said he was stepping down so Putin could appoint a new government to help carry through the constitutional reforms.

"In this context it's obvious that we as the government of the Russian Federation must give the president of our country the opportunity to do everything necessary for this decision," Medvedev said.

Shortly afterwards Putin named Medvedev's successor as prime minister, Mikhail Mishustin, the relatively little-known head of the Federal Tax Service, saying his candidacy had been sent to parliament for approval. Mishustin, 53, is not thought of as a major power broker or a member of Putin's inner circle, although as head of the tax agency he has been praised for overhauling Russia's backward tax collection system, introducing data technologies that have made it one of the most advanced in the world.

The changes to the constitution that Putin suggested in his speech would transfer powers away from the presidency and strengthen the parliament, known as the Duma, as well as the Federation Council -- Russia's equivalent of the Senate -- and the Supreme Court.

One key change would take the power of selecting a cabinet from the presidency and pass it to the parliament. Currently, the prime minister and ministers are appointed by the president. But under Putin's proposal, parliament would now select the prime minister who would then nominate his own ministers for approval by members of parliament. Another change would grant the Federation Council the authority to confirm the appointments of the head of Russia's key security agencies.

The parliament's deputy speaker, Alexander Zhukov told reporters after the speech that the national vote on the amendments would likely take place this year, perhaps in September.

Putin has long avoided saying whether he will stay on after 2024, but experts said the proposed changes indicated the potential routes the Kremlin was now considering for getting out of his transition problem. Russia's constitution currently sets a two consecutive term limit on presidencies, and Putin, who has effectively ruled the country since 2000, is now in his fourth. In 2008, he sidestepped the limit on consecutive terms by temporarily passing the presidency to Medvedev while he became prime minister before returning to office in 2012.

But Putin has suggested this time he will not repeat the trick and on Wednesday suggested that the word "consecutive" be removed from the constitutional article on term limits.

Alexei Makarkin, an analyst at the Moscow-based Center for Political Technologies, said Putin's proposals showed he had decided not to stay on as president but was clearly preparing to maintain his power from outside the office. That meant, Putin was also not planning on replacing himself with a successor, he said.

The proposed changes to the constitution, Makarkin told ABC News, were intended to ensure any president taking over from Putin would be weaker so he can retain his authority from a new position.

"They need to remove the question itself -- of selecting a successor," Makarkin said. "Putin himself would not like there to be a second Putin," Makarkin told ABC News.

Many noted that in his speech Putin proposed strengthening the role of the State Council in the constitution. One widely speculated option is that Putin could become head of a reformed council as a way for him to remain a supreme leader figure, following a model employed by China's Deng Xiaoping. Another version would see Putin partly repeat his 2008 move, becoming a newly more powerful prime minister.

"Putin seems [to be] preparing for transition but acting as though he doesn't know the exact contours of what such a transition would necessitate," Anna Aruntunyan, senior Russian analyst with Crisis Group wrote on Twitter. "He wants to have things to choose from."

Medvedev's stepping down as prime minister was also seen by some as a sign he is now out of consideration as a candidate for Putin's successor. In recent years he had become seen as a liability, widely mocked among Russians and viewed as corrupt.

The proposed changes would not mean a major transfer of power while Putin remains president as the presidential administration currently dominates Russia's parliament, which acts as a rubber stamp for the Kremlin's actions. Putin's party United Russia holds a large majority and the parliament is stocked with faux opposition parties that actually support Putin.

Putin also emphasised that Russia "must remain a presidential republic," and said that such a huge and diverse country cannot survive without a strong presidency. The president would also retain the key power to fire a prime minister and other ministers, the Russian president said.

As he has before, Putin focused his speech heavily on the need to improve living standards and fight poverty levels. At times he has used his national address to deliver menacing diatribes against the West and in 2018 he unveiled a series of super weapons that he claimed placed Russia ahead in any new arms race.

Putin made reference to those weapons again on Wednesday, saying other countries were now having to try to catch up with Russia. One of the proposed constitutional amendments would also affirm the primacy of Russia's constitution over international treaties and conventions, which authorities could use to ignore rulings from bodies such as the European Court of Human Rights.

But he largely avoided speaking about international affairs and instead promised a series of measures to aid families, including providing free school meals to all children for the first four years of their education. One of the other constitutional changes he proposed was a stipulation that the minimum wage in Russia not be lower than the poverty line.
Report a correction or typo
Related topics:
abc newsnational
Copyright © 2020 ABC News Internet Ventures.
More Videos
From CNN Newsource affiliates
TOP STORIES