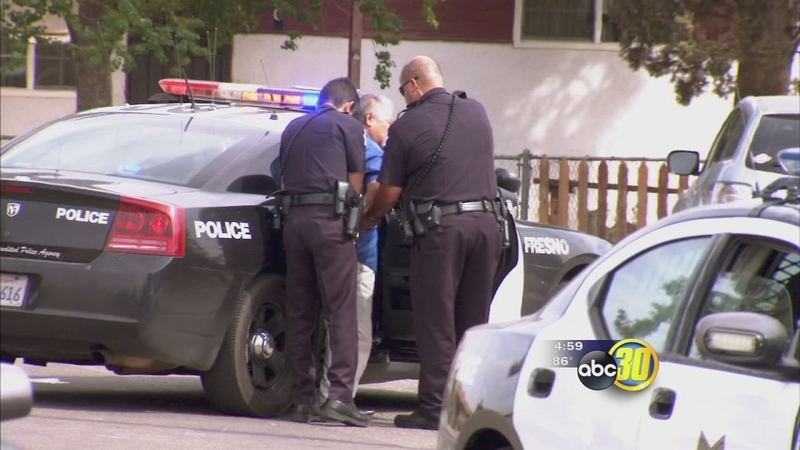 Fresno father kills his own son, neighbors in shock

FRESNO, Calif. -- Shocked Fresno residents are trying to figure out what made their normally quiet neighbors so upset on Sunday.

The victim has been identified as 39-year-old Tom Yue of Fresno. Neighbors say Yue is married with one son, and his wife is pregnant with the second.

A neighbor says she heard fighting all morning but didn't understand the conversation because they were yelling in Chinese. But after the gunfire, she ran outside to see the chaotic and heartbreaking scene.

Samuel Yue was calm and cooperative when Fresno police officers arrested him Sunday in his front yard. Moments earlier, investigators say he fired several rounds that struck and killed his son, Tom Yue.

Hermine Piloyan lives next door and was the first to go out and see what was going on. The gunfire was followed by a distraught woman crying and begging for help.

"When the gunshots stopped, I honestly heard the wife yelling and screaming for help and yelling to her husband please don't go, please don't leave me," Piloyan said.

Investigators believe a family issue started the fight that witnesses say included a lot of hollering back and forth near the front porch. Neighbors say it never became physical, and they didn't feel the need to intervene. Police say in the past, they have never been called to the house for any domestic problems.

Piloyan was the first to confront the suspect seconds after the murder.

"The father was standing in the middle of the gate, and I asked him what happened. And he just pointed at his son, which was laying down on the floor without talking. He was kind of in shock. He did not say a word to me," Piloyan said.

Fresno police say the victim's wife is pregnant and close to delivering the couple's second child. She was home during the disturbance and may hold the answer to many questions detectives have about the motive.

Several other family members were also home at the time of the murder, including the suspect's wife, who is also the victim's mother. The suspect was initially taken to jail, but medical staff determined he was suicidal, so he was taken to Community Regional Medical Center. Once he is cleared, he will be booked for murder.