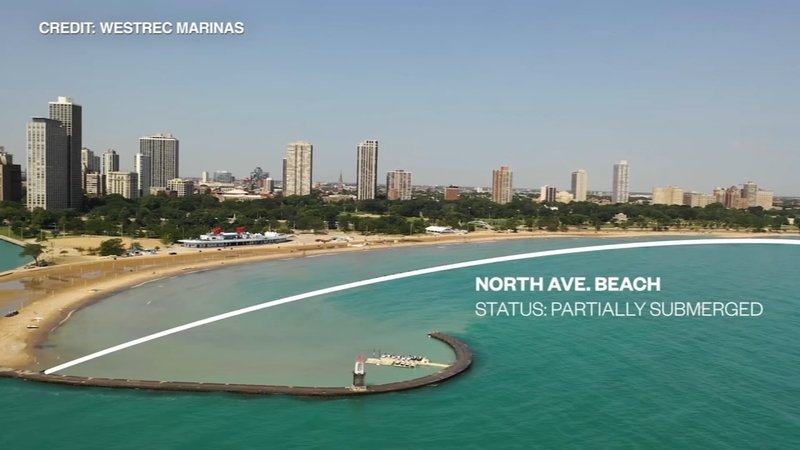 CHICAGO (WLS) -- You may or may not have noticed Chicago's shoreline is shrinking.

According to the city's Park District the land along the lakefront is slowly disappearing, but a new effort could help protect what's left of it.

The last days of summer are here and soon the waves in Lake Michigan will be even bigger. With bigger waves comes major concerns for the Chicago Park District who said they have been fighting shoreline loss for generations.

"We absolutely have gotten a ton of calls from residents. I believe our elected officials are getting them as well," said Chicago Park District Director of planning and development, Heather Gleason. "People are definitely concerned and people love the lakefront in Chicago. Even people who are just going to the beaches are noticing the lake levels are coming up really high."

That's why Tuesday Park District officials launched a fact finding mission to assess the state of the city's 18 miles of shoreline.

Lake Michigan water levels sit fractionally below their record highs from 1986, which is a rebound from record lows in 2009. They said the surge has submerged important navigational measures and wiped out nearly all the sand at many points including Juneway Beach.

"We have tried some patch jobs over time last summer. We did a few and the lake just took them right back out," said Gleason. "So we are thinking that we are really going to need to take a look at the drone footage and all the work our consultants are doing to see what are the short term and long term solutions that we may need to be considering."

A video from the contractor that runs Chicago's harbor system, which is the largest municipal setup of its kind in the nation, tells the tale of what North Avenue Beach used to be.

The Park District will use its drone footage to work with consultants and the Army Corps of Engineers to develop new strategies to fight erosion.

They said they will be gathering pictures through mid-September.

"They will fly at 200 and 100 feet, and in some cases 50 feet, so they will get it relatively close to where we think we have the most damage. So for instance, near break waters where the edges of concrete comes together, so that we can really get in there and see what kind of damage the leak has been causing with these high levels."