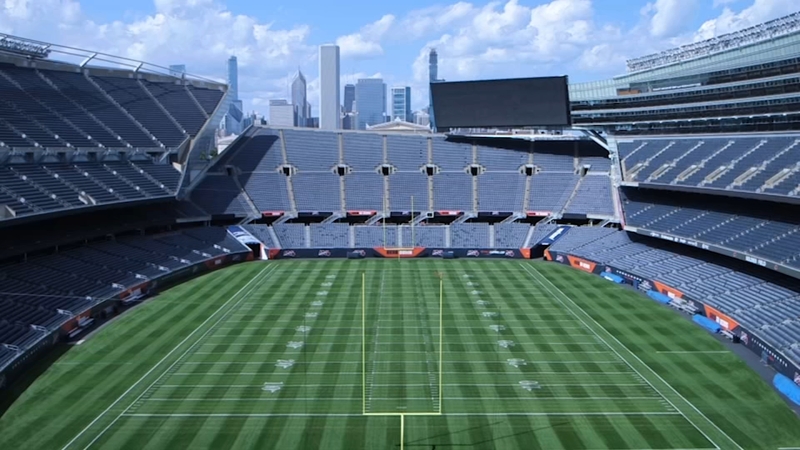 CHICAGO (WLS) -- The kickoff of the Chicago Bears season will mark the 95th anniversary of Soldier Field, a stadium that was first planned for construction 100 years ago.

To honor that anniversary, the Chicago Park District -which owns the field - put together a new exhibit of never-before-seen photos of the field's original renderings and books outlining construction logistics.

Doreen O'Donnell, Deputy Director for Planning & Development for the Chicago Park District, compiled and completed digitization of the collection.

"I looked to our archive, and I thought, 'Oh my god. What a wonderful collection we do have to add here," O'Donnell said.

In 1919, the South Park Commission - one of 22 park commissions that later merged into the park district - held a competition for six Chicago architecture firms to design a new stadium in honor of America's World War I veterans.

The firm of Holabird & Roche won with a unique design: a U-shaped stadium creating a direct view of the Field Museum for around 100,000 spectators.

"If you were sitting in the south end zone and it was a horseshoe, it perfectly framed the Field Museum. And that's awesome," said Michael P. Kelly, General Superintendent and CEO of the Chicago Park District.

According to early financial documentation, costs for the project were "not to exceed $2 million." But a number of construction obstacles more than quadrupled that estimate.

"It was built in reclaimed land. There was about 15 feet of water. So like the Field Museum, 60 foot piles had to be driven into the ground to build this massive stadium," said O'Donnell. "So the costs were higher than anticipated."

In its earliest years, the stadium was used for a variety of events ranging from military parades to dances and circus performances. Over the decades that followed, Soldier Field has hosted major concerts, a FIFA World Cup, the inaugural 1968 Special Olympics, and more landmark events.

In 1971, the Bears moved from Wrigley Field to open their first season at Soldier Field.

Over the near century since it opened, Soldier Field has undergone several major renovations. And in the early 2000s, controversial alterations were made to the exterior of the stadium, which led to the stripping of its national historic landmark designation.

Contentious as the latest renovations may be, Soldier Field remains a unique landmark among Chicago's lakefront skyline.