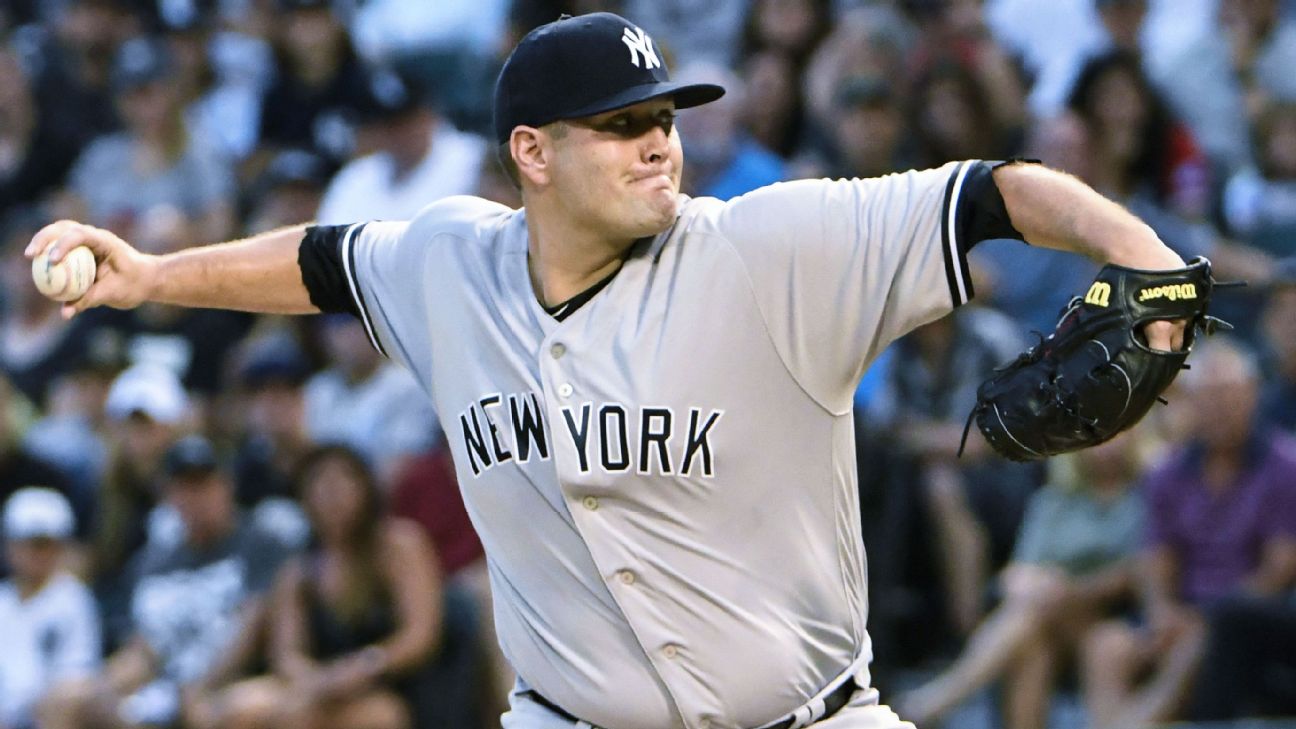 ESPN
By Bradford Doolittle
Before you can start healing, you've got to stop the bleeding. The New York Yankees did just that Monday night thanks to a human bandage named Lance Lynn.

The Yankees limped into Chicago on Monday after a massacre of a weekend in Boston. Four games against their ancient rival. Four losses, punctuated by Sunday night's collapse in a game that stretched to nearly five hours. New York's deficit in the American League East had ballooned to 9 games behind the Red Sox, and the Yankees' odds of winning the division dwindled accordingly. Their overall losing streak was at a season-high five games.

Thus was the landscape for Lynn when he took the hill against those other Sox, the ones residing on the South Side of Chicago. Lynn was making his first start in a New York uniform, though he debuted last week for the Yankees with 4 scoreless innings of relief. Now you can tack 7 more zeroes onto Lynn's New York tab after he shut down the White Sox on two hits before giving way to A.J. Cole, who finished off New York's 7-0 win.

Lynn, of course, was one of the unfortunates from the free-agent class of last winter, when he hit the market for the first time as a big leaguer. He didn't sign until March 12, well into spring training, landing with the Twins on a one-year, $12 million deal. The late start didn't do Lynn any favors as he posted a 8.37 ERA in April. He has been better since, which isn't saying much, but since that first month, he had posted a 3.90 ERA entering Monday's start, much more in line with his career numbers for St. Louis.

This was easily Lynn's best outing of the season. His game score (82) tied for the fourth-best of his 128 career starts and was his top performance since he put up an 82 game score on May 23, 2017. His best score this season was a 67 on May 22 against Detroit.

According to ESPN Stats & Information, Lynn became just the fifth Yankee since 1990 to throw seven or more scoreless innings in his first start for the franchise. The others: Scott Sanderson (1991), Sam Militello (1992), Mike Mussina (2001) and Jose Contreras (2003). So the Yankees gained a half-game back on the idle Red Sox. It's a start.

All teams struggle at some point during a long season, and while the Yankees have certainly played slipshod baseball of late, they are dealing with a rash of injuries to key performers such as Aaron Judge and Gary Sanchez. The defending-champion Astros had a rough stretch in August of last year when injuries hit. The Dodgers, whom the Astros beat in the 2017 World Series, lost 16 of 17 during one dreadful stretch late in the regular season. It happens.

While the Boston series stings, the Yankees have a golden opportunity to right the ship with their upcoming schedule. After two more games against the woeful White Sox, New York begins an 11-game homestand against Texas, Tampa Bay and Toronto, with a make-up game against the Mets tossed in for good measure. Then New York goes to Miami for two games and Baltimore for four, before returning to Yankee Stadium for seven games against the White Sox and Tigers.

It has been a long week for the Bombers. The next month is shaping up to be a lot better.

No-No Sox:Meanwhile, it wasn't a total wash for the White Sox, who got this home-run robbing theft from all-glove, no-hit center fielder Adam Engel.

Oh, and if you're keeping tabs on the position-player-pitching phenomenon, Chicago slugger Matt Davidson logged a scoreless ninth. Davidson now has three scoreless one-inning outings under his belt this season. And he did this to Giancarlo Stanton:

That is the look of a guy who just struck out against Matt Davidson.

Cleveland in cruise control: It's August. The top two teams in the American League Central opened a four-game set on Monday night. It's a big series!

Behind Cy Young ... front-runner? ... Trevor Bauer, the Indians thumped the second-place Twins 10-0 to open up a 10-game lead in the division. Bauer struck out 11 over six scoreless innings and now has a career-high 206 K's on the season, one shy of injured Boston ace Chris Sale for the AL lead.

Bauer also took the junior circuit's lead for innings pitched with an average fastball that zipped in at a season-best 94.4 mph. And don't forget one other thing:

A very self-aware young man, Mr. Bauer is. But he is very much in the AL Cy Young race, along with Sale (if he returns soon), Justin Verlander and, possibly, Bauer's former UCLA teammate, Gerrit Cole. That is, if you go by the Fangraphs version of WAR, which Bauer clearly does. Because he entered the night 1.1 WAR behind Sale in the baseball-reference.com version, a gap he didn't make up with Monday's outing.

As for Cleveland, the Indians can go ahead and put the champagne they want to pop after clinching the division on ice. While the Yankees have a favorable schedule for the next month, they do not have the easiest overall remaining schedule. That would be Cleveland, with its Central-heavy remaining slate. Based on my power ratings, the Indians' remaining opponents have an average collective worth of a 73-win team. That's three games easier than the Yankees, who have the second-easiest remaining schedule.

After Monday's win, Cleveland is 33-15 against its weak division. Against everyone else, the Indians are 29-34.

Fiers already has put up 3.1 bWAR (baseball-reference.com WAR) this season, a career best. He was 7-6 for Detroit with a 3.48 ERA and a 128 ERA+. Fiers has been a little more control-oriented this season, losing two strikeouts per nine innings off his K rate, but his walk rate is a career low. Fiers threw 28 wild pitches in the two seasons prior to this one, more than any other pitcher except for Jake Arrieta. This season, he has just two.

Of course, in trading whiffs for command, Fiers is more reliant on the defense behind him than he was last year for Houston. His BABIP (.278) is 17 points better than his career mark. In going from the Tigers to the A's, Fiers is trading a defense with plus-five runs saved (per Baseball Info Solutions) for one with plus-25, with Detroit and Oakland rating about the same in terms of shifting. Fiers is a fly ball hurler who will benefit from a move to Oakland's ballpark, which rated as the second-stingiest homer venue from 2015 to 2017, according to the 2018 bullpen handbook.

As well as Oakland has played, the Athletics' pitching staff has been carried by a deep and dominant bullpen. Oakland ranks third in bullpen WAR this season, but 21st in the rotation. The Oakland cause hasn't been helped by injuries to their starting crew. Lately, the A's have been getting by mainly with four starters: Sean Manaea, Trevor Cahill, Brett Anderson and Edwin Jackson.

Suffice to say, that's not how Beane drew it up over the winter. Fiers should help keep things stable for an Oakland club that has not only passed the Mariners for the AL's second wild-card slot. The A's now have the Yankees in sight for that top wild-card and are just 4 games behind the AL West-leading Astros, who are currently dealing with an injury epidemic.

Ankiel back at it: Former pitcher-turned-outfielder Rick Ankiel announced he would attempt a comeback in 2019 ... as a pitcher. A reliever, to be exact. Ankiel will turn 40 during the 2019 season and hasn't appeared in the big leagues since 2013. He hasn't pitched in the majors since 2004. He went 11-7 with a 3.50 ERA and 194 strikeouts in 2000 at the age of 20, before succumbing to a horrific loss of command and arm injuries.

That Ankiel was able to reinvent himself as a hitter, hit 76 big league homers, and earn over $12 million playing baseball, was already a great story. If he's able to pull this off though ... that would be an all-timer. Can't wait to see Ankiel in spring training.

Could have been worse:The Astros got a measure of good news Monday when the diagnosis on injured starter Lance McCullers was a forearm strain. However, McCullers isn't expected to return to action until September, and it's hard to say how much of a problem the injury might be entering the postseason for the curveball specialist.

In the meantime, the Astros will have to decide whether to dip into their bullpen for a rotation replacement, give a kid a shot from the system or look for outside help. Collin McHugh and Brad Peacock both worked in the Houston rotation last season, but have been key parts of this year's bullpen.

You can't help but wonder if Houston looked into Fiers, who was on last year's Astros squad but did not appear in the postseason.

Yankees get 'enormous performance' from Lynn
Karl Ravech says Lance Lynn was exactly "what the doctor ordered" for the Yankees, who snapped a five-game slide on Monday.