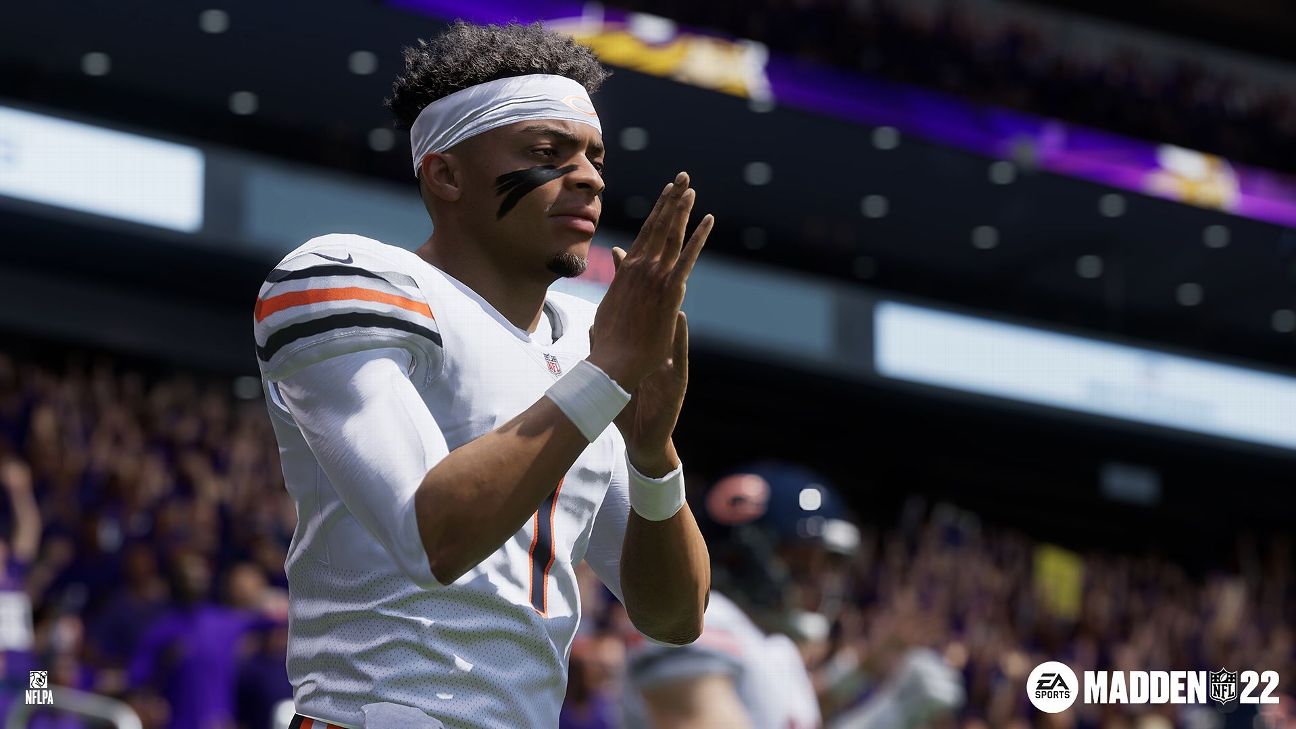 It's going to look different this year. A full year of working with next-generation consoles. A revamped franchise mode. For the first time in a decade, two athletes on the cover.

Madden is back, and the latest iteration of the iconic video game (Madden NFL 22, in stores Friday) is bringing a new generation to the franchise. One of the focal points is the change of franchise mode, one of the game's most popular styles of play, as well as adding Next Gen Stats into next-gen consoles.


Home-field advantage now exists, as does more dynamic fatigue. There's a new Face of the Franchise storyline, including an option to play linebacker for the first time. But as long as the game evolves, its roots are still in the players, their ratings and the milepost toward the NFL season it denotes.

"For as long as I can remember, it's just kind of amazing what it's done in culture," co-cover athlete Tom Brady told ESPN. "All the tournaments around the Super Bowl, the Madden Bowl. It's allowed someone like Coach [John] Madden the opportunity to have people understand the contributions he made to the game, too.

"So he was a great coach, a great broadcaster. So influential in the growth of the game, and really to this day and really through this game, a lot of people, before they even are going to be playing real football, they were playing Madden football, which is a pretty cool thing to think about."

Chances are at least some of those players will use Brady -- or Patrick Mahomes -- this year. A lot. When you do start playing, here's a guide to help you along the way.

Two teams dominate the 99s this year -- the Chiefs and Rams. It's the first time a team has two 99 players at launch since Madden NFL 19 with former Patriots, Brady and Rob Gronkowski. Brady, by the way, is a 97 in this year's game at launch -- second among quarterbacks to his co-cover athlete, Mahomes. Brady could easily end up a 99 during in-season movement, along with former 99 Club members Christian McCaffrey and Stephon Gilmore, receivers DeAndre Hopkins and Tyreek Hill, right guard Zack Martin and defensive end Myles Garrett. All are 97 or higher to start. It's the second straight year no linebacker has been a 99. The highest-rated linebackers areKhalil Mack (96) as an edge rusher and Fred Warner (94) as a middle linebacker.

Tyler Bray, QB, free agent (47)
Triner and Orzech didn't do anything wrong here. It's just how Madden handles long-snappers, rating them low and listing them as tight ends. Beyond snappers, the lowest-rated players are quarterbacks -- the two free agents. Lowest-rated quarterback on a team? That would be Miami's Reid Sinnett, the Jets' Mike White and Seattle's Danny Etling -- all tied at 48.

Welcome to the league, rook

Pitts' 91 speed as a tight end stands out, as do his 92 acceleration and 84 catching. Waddle's 97 speed -- as covered later in this story -- is elite. It's not surprising that skill-position players stand out, and every one of the top-rated rookies was a first-rounder.

The lowest-rated rookies? Tight end snappers "lead the way" with Washington's Camaron Cheeseman (33) and Carolina's Thomas Fletcher (36) -- both sixth-round picks. But hey, they are in the game, right? Take out the snappers and it's Tampa Bay centerDonell Stanleyand Chargers middle linebacker Amen Ogbongbemiga(both at 55).

A running back makes a return to the elite speed group after it was receiver-exclusive last year. Mostert is the fastest back in the game since Corey Grant was a 96 in Madden 20. No surprise that Hill is still a 99 and Ruggs is right behind him. A couple of rookies join the list in Schwartz and Waddle, along with two holdovers from a season ago in Hardman and Brown. As for Marquise Goodwin, who used to always be at the top of this list, he's close. He's a 96.

Madden developers hated on 38-year-old Robbie Gould. The San Francisco kicker is the slowest non-lineman in the game (57), followed by Mason Crosby (59) and Brady (59). Both Crosby and Brady got slower from last year, when they were 60s.

Ratings here remained largely static from last year. Donald is at the top. Joseph and Ioannidis didn't change, either. Neither did Watt, Nelson or Vea. Only Ndamukong Suh disappeared from the top; he dropped down to a 94 after being a 97 last year and a 98 the year before. Gould continues to be among the weakest in the game -- this is the third straight year he has been rated as a 25. He has company in this area; his teammate Travis Benjamin is the weakest non-kicker/punter at 38, the only non-kicker/punter under 40 for the third straight year. Receivers J.J. Nelson (40) and Tutu Atwell (40) were close to this ignominious title, though.

This is a little tricky because if Dalton or Foles wins the job in Chicago, rookie Justin Fields (74) joins this list. Same if Jones beats out Cam Newton; Newton's 76 rating would be high up here. If Taysom Hill (67) beats out Jameis Winston (73), then Winston would join this club. Like in real life, though, most teams would be in actual trouble if they had to play without their starter.

Cannon for an arm

This stayed somewhat similar at the top -- Allen, then Mahomes -- with Stafford gaining a strength point and Mayfield entering the elite. Gone is retired Matt Schaub from the weakest list (he was a 77 last year, tied with Griffin), and Woodside actually gained two throw power points.

It's the third straight year the number of quarterbacks with 90 throw power or better has grown since the ratings team created a stretch to make power more realistic. After being 18 deep in Madden 20 and jumping to 20 in Madden 21, 24 quarterbacks have 90 throw power or better this year, including five rookies: Zach Wilson (94), Lawrence (91), Lance (91), Fields (92) and Atlanta's Feleipe Franks (90).

Franks (59) and Green Bay's Jake Dolegala (54 overall, 91 throw power), are the lowest-rated quarterbacks with 90-or-better throw power. Oh, and Dolegala is not on the Packers anymore -- so by the first game update, he could be a free agent.

No surprises here that specialists -- and Robbie Gould -- would be at the bottom of another athletic trait. If I were Gould, I'd send a tape of my abilities or something to the Madden raters just to prove a point. As far as the best jumpers, none of these guys should surprise, especially since Jones had an incredible 12-foot, 3-inch broad jump at the 2015 NFL combine. Perhaps the only surprise is Jones being behind anyone in any jumping category.

You're in good hands

Five guys ... with whom to start a franchise

Patrick Mahomes, QB, Kansas City: This is a no-brainer selection. Second-best throwing power in the game (97), a 99 overall. Still only 25 years old. Twice a cover athlete. No. 2 in deep accuracy (94) and short accuracy (97) and the best thrower under pressure (96). Plus, with 81 speed and 87 acceleration, he can move. Buffalo's Josh Allen (88 overall, 99 throw power, 86 speed) is another player to consider here if you do not have a 99 overall quarterback.

Lamar Jackson, QB, Baltimore: The former MVP is still the game's most enticing player with a 91 overall rating as a quarterback, 96 speed, 96 acceleration and 92 throwing power. At 24, it'd be easy to build him into a 99 overall player -- probably by the end of your first season at the latest.

Trevor Lawrence, QB, Jacksonville: With 91 throwing power, that's good enough to build around, plus you have the benefit of his age (21) and good enough speed (84). The other quarterbacks on the list are a little older, but if you want to roll with one of the rookies, Lawrence should be your guy.

Jaire Alexander, CB, Green Bay: Thinking defense? Alexander is one of the best -- and younger than Jalen Ramsey or Stephon Gilmore but still a 95 rating to start out with. He's third against man (97) and third against zone (95). Building from the secondary? Alexander is the place to start.

Myles Garrett, DE, Cleveland: Sticking to defense but rolling with pressure on the quarterback, Garrett is your go-to. At 25, he's the best edge rusher in the game (98 overall) and is all about power with a game-best-for-edge-rushers 98 power move. With 85 speed and 90 acceleration, he's going to beat most tackles off the edge. Start here, and quarterbacks will hate you.

That these are all running backs is no surprise. Backs often break tackles the best anyway, and these are the best of the bunch, the guys whom you don't want to mess with, well, ever if they have the ball in their hands. Russell Wilson (83) is the best quarterback tackle-breaker in the game, and Julio Jones (89) is the best receiver, followed by Deebo Samuel (88).

It's a group that, for the most part, will someday be donning gold jackets. Or should be. To reach almost 40 in the league (other than as a kicker or punter) is hard to do. In Madden parlance, you've been in the game for generation upon generation of consoles. You've spanned the career, waiting period and Hall of Fame induction of onetime Madden cover athlete Calvin Johnson (drafted in 2007). If you add quarterbacks to the list, you get three more -- Tom Brady (44), Ben Roethlisberger (39) and Ryan Fitzpatrick (38).

It's an eclectic group -- and one with a man considered one of the best long-snappers ever, too. Of the guys currently in the game, only a handful will reach this moment.

Teams you do and don't want to play with

None of these should be a surprise. Tampa Bay is the defending Super Bowl champ and brings back everyone. The Bucs have dynamic playmakers on every level and Tom Brady at quarterback. Kansas City was in the Super Bowl and has Patrick Mahomes and Tyreek Hill. Green Bay has Davante Adams and the league MVP, Aaron Rodgers.

The worst? Carolina is a year away. The Jets have a rookie quarterback and a roster full of questions, and Detroit is in the midst of a massive rebuild. Houston would be there, too, if Deshaun Watson weren't on the virtual roster. That the Jets' defense is rated a 69 -- the lowest offensive or defensive rating in the game -- tells you all you need to know about what the raters think of New York prowess with the ball. 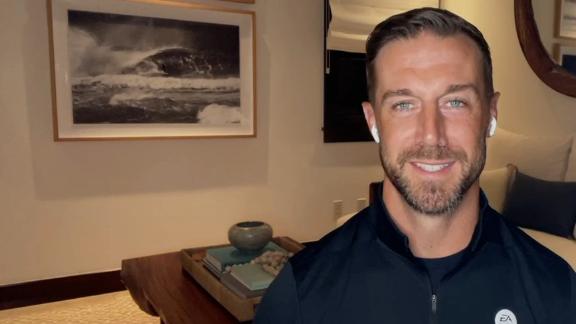 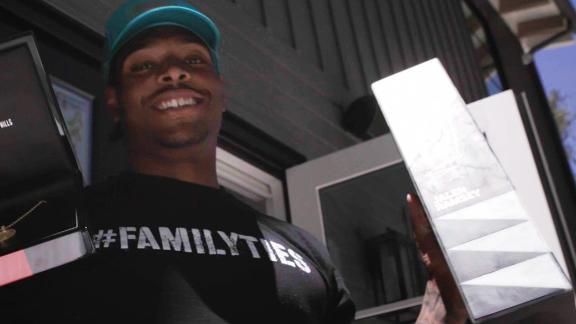 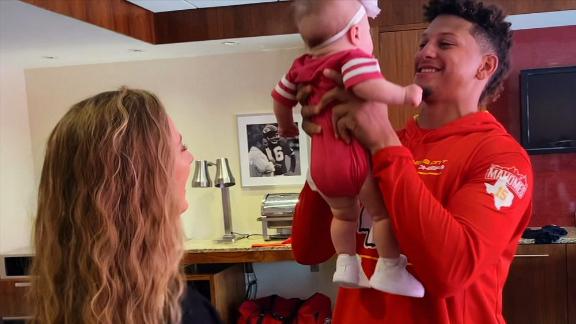