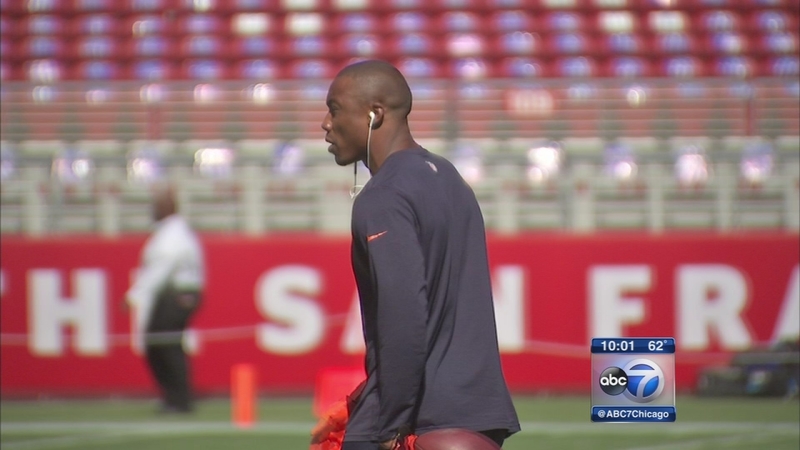 CHICAGO (WLS) -- Brandon Marshall is the latest NFL player to be at the center of the league's domestic violence controversy. There are new charges that the NFL failed to act on allegations of domestic abuse involving an old case against Marshall.

Brandon Marshall tweeted that he plans to talk on Thursday about the domestic violence allegations and the current state of the NFL.

Attorney Gloria Allred said NFL Commissioner Roger Goodell failed while handling domestic violence allegations against Marshall in 2006, even though the victim's father and friend say they both contacted the commissioner directly. Now, Allred wants the NFL to adopt an investigative process as she uses the Bears player as an example.

On Wednesday, the nationally-known attorney pointed at Marshall and the way the NFL handled allegations that he beat his former girlfriend, Rasheedah Watley. Watley's friend recounted what happened in June 2006.

"She told me she was hiding in the bushes from Brandon, who had allegedly punched her in the face," said Kristeena Spivey, Rasheedah Watley's friend.

Spivey admits she wasn't there at the time, but she immediately sent her friend a plane ticket and picked her up at the airport.

"She had blood in her severely swollen lips. Her hair was disheveled, there were tears running down her face," said Spivey.

Allred says, at the time, NFL Commissioner Roger Goodell failed to conduct a full, fair and timely investigation even though Spivey and Watley's father say they reached out to Goodell.

Marshall played for the Broncos at the time. A Broncos spokesman said Wednesday night: "This issue from more than seven years ago involving a former player was taken very seriously by our organization, which firmly believes that violence of any type against women is wrong."

Allred emphasized she wants the NFL to change its procedures.

Marshall has faced the following accusations. In 2009, he was accused of disorderly conduct, but those charges were dropped. In 2008, he was accused of hitting his girlfriend, and was suspended for one game. In 2007, he was charged with drunk driving, and pleaded guilty to reduced charges. That same year, he was charged with false imprisonment and sentenced to a diversion program.

On Wednesday night, Marshall tweeted: "Topics I'll be talking about tomorrow = Current state of the NFL. Roger Goodell. Domestic Violence. ESPN and using my case to show why I think we need to have the right systems in place before we act."

"I think he has great character. He hasn't been in any trouble, I haven't heard any headlines since he's been a Chicago Bear, I think he has a stellar reputation," said Charles Tillman, Bears cornerback.

"Brandon has the full support of the Chicago Bears. We were aware of his personal background when we traded for him in 2012 and equally aware of the tremendous efforts he made to bring positive changes in his life and in the lives of all the people around him. Since his arrival, Brandon has thrived in an environment that has been supportive. He has been a very positive, thoughtful and proactive leader and role model. He has acknowledged his past struggles and shared his story in an effort to help others improve their daily lives. Brandon has been at the forefront of mental health awareness and has extended himself in an unprecedented way to help fellow players across the NFL. He has helped himself through helping others and we are proud to have him as a teammate."

The Brandon Marshall Foundation, which focuses on mental health issues, is based in Chicago. On Wednesday, the foundation's CEO said: "We certainly don't condone domestic violence and it's not something any of our leadership would condone. I've known Brandon for more than a year now and have never known him to be a violent person or anything like that."

Marshall was never charged in that 2006 incident. Marshall has not responded directly to Eyewitness News for comment.