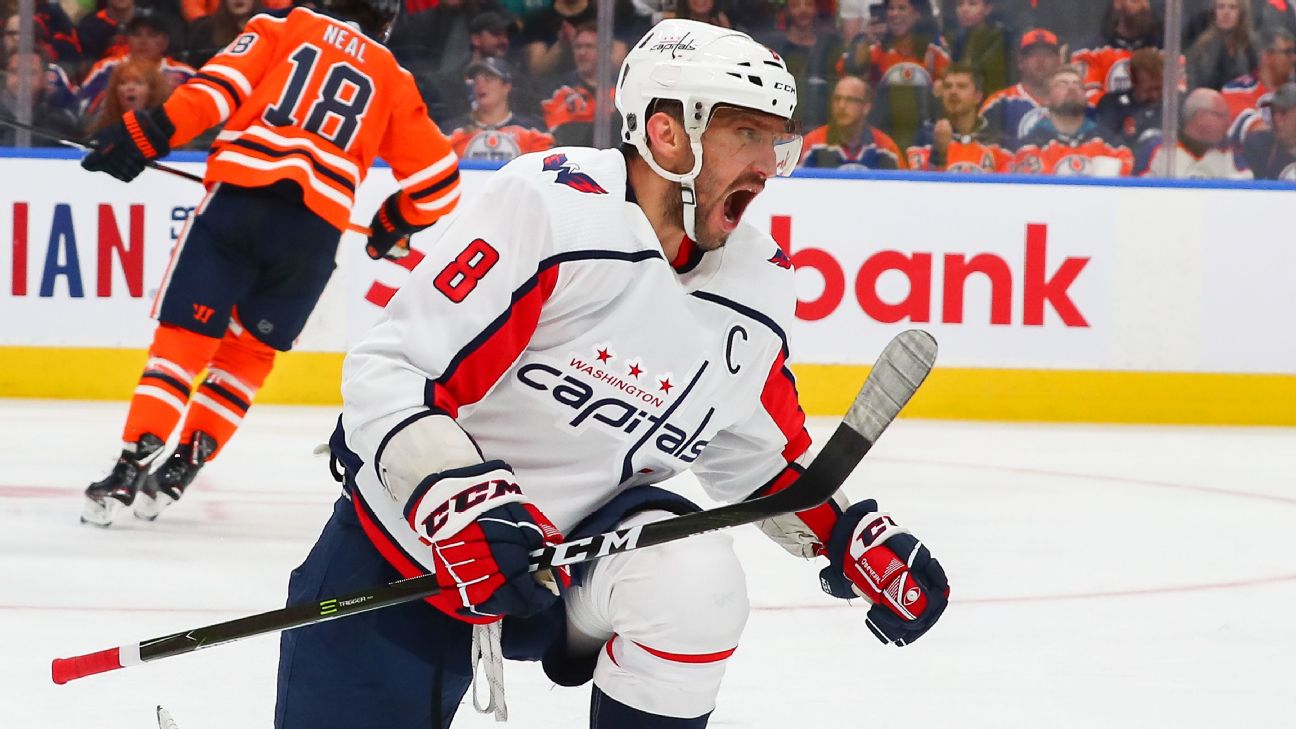 ESPN
By NHL Insiders
We're nearly two months into the 2019-20 NHL season, with a slew of trends emerging to either buy or sell. So, we gathered a panel of four of our NHL analysts to weigh in on whether they believe these early season statements. For this week, that includes:

Greg Wyshynski, senior NHL writer: Insta-buy. McDavid and Draisaitl have a 14-point margin after Thursday night, a 53-point advantage over the past two seasons and, barring injury or an Oilers' collapse, are going to make life difficult for us Hart Trophy voters.

Dimitri Filipovic, hockey analytics writer: Buy. No team leans more heavily on its star players than the Oilers do on McDavid and Draisaitl, with each of them being responsible for north of 40% of the team's total goals scored thus far. They're also the only two forwards currently averaging over 22 minutes, and there's no reason to believe that's going to change any time soon. The Bruins might wind up being more efficient on a per minute basis, but sheerly based on the raw volume of opportunities, the Oilers' duo is a better bet to accumulate more total points.

Victoria Matiash, fantasy hockey analyst: Sell.But it will be close. Oppositions will readjust their approach in defending the Oilers' outlying top duo out of necessity as the months wear on, just as we saw teams eventually accustom their strategy in playing the Avalanche's No. 1 line last season. That will result in the gap narrowing between these two forward pairings before ultimately flipping in the Bruins' favor by spring.

Tim Kavanagh, NHL editor: Sell. McDavid and Draisaitl are on pace to win this by a wide margin (310 to 270), but they play in a division (3.14 goals against per game for non-Edmonton teams) and conference (3.02) that is more stingy than the Bruins (3.32 and 3.16 for non-Boston teams, respectively).

2. If the Flames miss the playoffs, it won't be because they didn't upgrade their goaltending enough in the offseason.

Wyshynski: Buy. Before Thursday night's blowout loss to St. Louis, the Flames had a team save percentage of .903 and David Rittich was on the positive side of goals-saved above average. It's not on him or Cam Talbot that the Flames are being routed at 5-on-5 after being third in the league at even strength last season.

Filipovic: Buy. Their goaltending isn't carrying them at the moment, but it's also hardly their biggest problem either. The duo of Rittich and Talbot is roughly in the middle of the pack in save percentage, and aside from disastrous performances by the latter in Vegas and by the former in St. Louis, they've given the Flames a chance to compete on most nights. The main concern in Calgary right now should be the fact that the Flames have gone from second to 28th in goals scored, with their shooting percentage completely going in the tank. It's been going for long enough now that it can't just be waved away, but it's also highly unlikely that someone as talented as Johnny Gaudreau carries a 7.8% personal shooting percentage and 6.7% on-ice shooting percentage all year long.

Matiash: Sell. The Flames will undoubtedly start scoring more. They're too talented to plod along like this for long. But there's no relying on that tandem, week in and week out, as the season wears on. And if Rittich and Talbot hit the skids simultaneously, which is hardly out of the question, it'll spell trouble.

Kavanagh: Sell. I believe the Flames will make the playoffs, but in the event that they don't, it will be squarely on the goaltending. Calgary is currently scoring more than a full goal per game less than 2018-19, and it's easy to see why: Of the team's top 10 scorers in 2018-19, only Elias Lindholm and Noah Hanifin have higher shooting percentages this season compared to last. I have faith these players will bounce back and the goals will come. On the other hand, Rittich is a known commodity, and I don't foresee some wild streak of dominance by him or Talbot.

Wyshynski: Buy. The Russian Machine never breaks, and the Capitals are fifth in the league in power-play opportunities, which means the Ovi spot remains open.

Filipovic: Buy. He's currently on pace for 51 goals, but unlike most of the other league leaders early on, his scoring binge isn't being fueled by an unsustainable shooting percentage. Just as impressive as the actual goal total is his ability to continually generate unparalleled shot volume. He's well on his way to a record 14th season with 300-plus shots on goal, and as long as he keeps putting the puck on net that frequently, he remains a good bet to flirt with 50 goals and the Rocket Richard Award.

Matiash: Buy. While others hammer on the math, I foresee Ovi simply willing it to happen, as long as he's close. By that, I mean we can probably expect fewer passing plays to John Carlson as the season winds down. There's no repeating the 49-goal total from two years ago. He either scores fewer than 45 or 50-plus.

Kavanagh: Buy. With 15 through 24 games, he's on pace for 51 this season, and he doesn't look a scintilla slower than his usually elite self (unlike certain NFL quarterbacks we've witnessed this season). And it remains true that even when everyone knows exactly where he'll set up on the power play, no team has been able to reliably suppress his scoring from his "office."

4. The Blackhawks will make the playoffs.

Wyshynski: Sell. Despite their improved goaltending this season, the Blackhawks aren't going to finish in the top three of the Central, and the Western Conference bubble is going to be an intensely competitive race. I respect the rebound, but they'll fall short.

Filipovic: Sell. The recent hot streak makes for a nice story, but they're playing well over their heads at the moment. At 5-on-5, they're currently 31st in shot share, 29th in high-danger chance share, and 29th in expected goal share. No team has a higher gap between their expected and actual goals thus far, and that's entirely due to the ridiculous goaltending they've received from Robin Lehner and Corey Crawford. But if the Hawks keep surrendering more shots and scoring chances against than opponents, those two will be able to hold the fort for only so long.

Matiash: Sell. I so want to buy here, but the rest of the Central strikes me as too tough. Aside from the Wild, all other six teams present as surefire to semi-legit contenders. If I'm siding with Dallas to make the postseason -- which I am -- it's near impossible to back the Blackhawks, as well. There aren't enough seats at the playoff table, even if both wild cards emerge from the division.

Kavanagh: Sell. The Blackhawks have become one of my favorite teams to watch. They have the NHL's highest combined shots-for/shots-against per game (67.0 through 21 games), it's fun to watch the development of Kirby Dach and the other youngsters -- remember, Alex DeBrincat is just 21 and Dylan Strome just 22 -- and it's impossible not to root for Lehner. But ... they're a year away from getting back in the tourney.

5. Schneider is completely finished as a regular NHL goalie.

Wyshynski: Buy. He has never recovered from his hip surgery at a time in the NHL when mobility in the crease is paramount, and I can't imagine what the market is for a 33-year-old with a minus-20.27 goals-saved below average over the past three seasons.

Filipovic: Buy. Unfortunately it's hard to see him ever regaining his form at this point, considering the 132-game sample we've seen from him over the past three-plus seasons. Since 2016, his .904 save percentage is 54th out of 62 goalies with at least 50 appearances, and of the goalies behind him, 25-year-old Joonas Korpisalo is the only one still playing in the league. Being 33 isn't as big of an issue for a goalie as it is at other positions, but when you combine it with his laundry list of ailments over the years, it adds up to work against him. The biggest shame is that it took him so long to get to the NHL considering how good he was early in his career, not really getting a shot as a workhorse starter until he was 29 because of the two legendary goalies that blocked his path on the Canucks and Devils.

Matiash: Sell. Admittedly a little sunny-side-up in fortune-telling, for of any individual player, I'm not ready to relegate Schneider to the sidelines. He was pretty great for several seasons before becoming less consistent three years ago in New Jersey. Some time away from the NHL, and maybe the game altogether, could do wonders in setting him back on track.

Kavanagh: Buy. This is a case where the eye test and the numbers match up. Schneider has simply looked a hair out of sync on the ice, and his .852 all-situations save percentage backs that up. Will we see Schneider appear in an NHL game again? Yes. But his days as a regular starter are behind him. 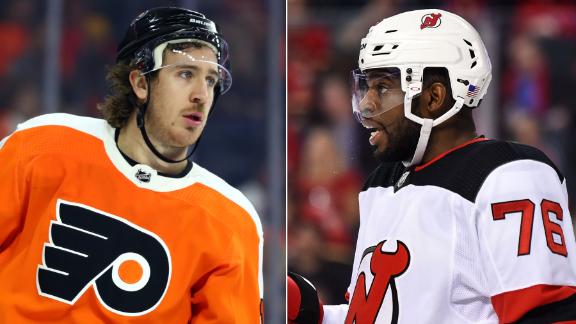