The most intriguing non-QB position battles this spring 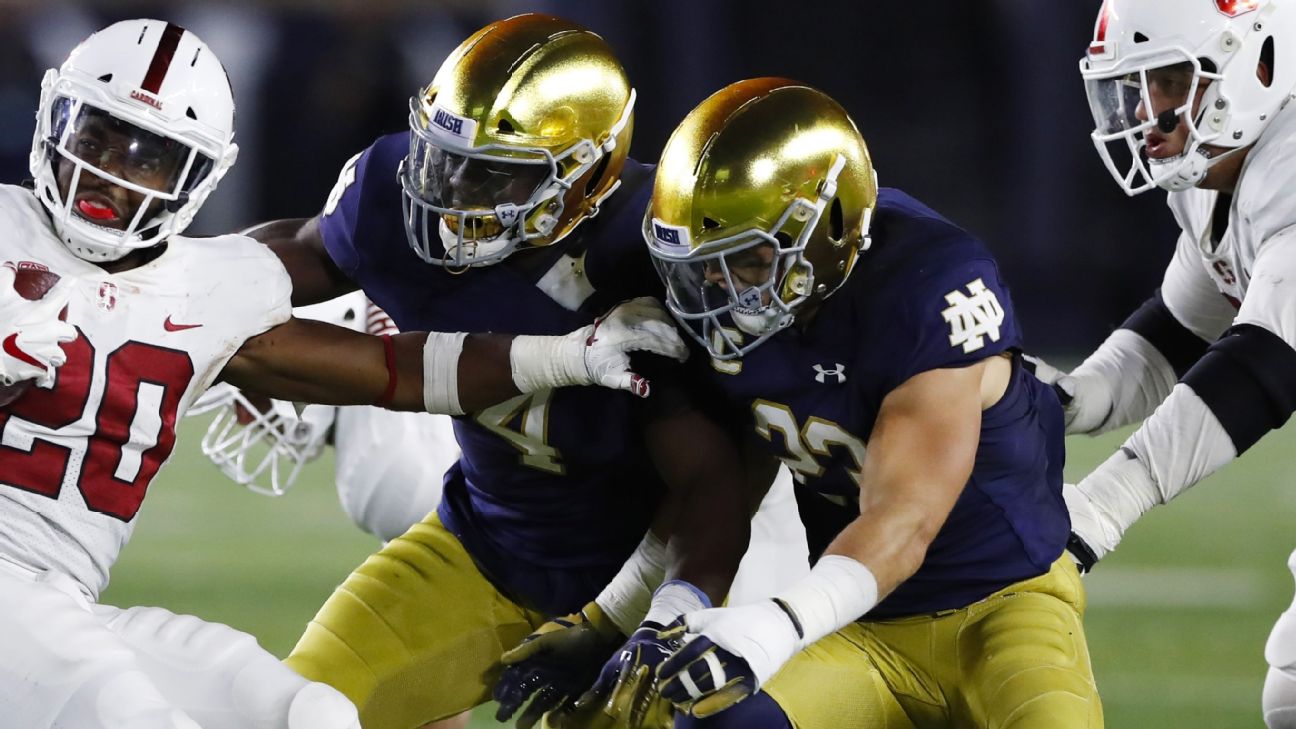 Quarterbacks tend to get the spotlight as the de facto leaders on their teams. But there are plenty of important open competitions this spring beyond quarterback battles to keep an eye on. For starters, the two teams that played for a national championship last season, Alabama and Clemson, have All-Americans to replace along their defensive lines.

Here's a quick look at some of the more intriguing competitions to follow this spring:

Once again, Alabama has to plug in new starters across its roster. One of the most important changes will happen at nose guard, where Williams dominated last season. At this time last year, Williams was a relative unknown on the Alabama roster. But once he won the job to replace Daron Payne, he became a household name. Thanks to a monster season, Williams left early for the NFL draft. So who does that leave to take his place? Phidarian Mathis, who made the SEC All-Freshman team a season ago, is one of the top candidates. Redshirt freshman Christian Barmore will also get a long look. But there's also ESPN 300 freshman D.J. Dale, an early enrollee with the physical tools to be able to play right away.

Clemson knew when it returned its entire defensive line a season ago, it was working on borrowed time. It certainly paid off, with another national championship to celebrate. But now the Tigers have to replace the entire group, and spring presents the perfect opportunity to not only get a glimpse of its next batch of stars, but also to build depth across the board. Projected starting defensive tackles Jordan Williams and Nyles Pinckney are out for spring, providing Xavier Kelly the chance to show that he's ready and capable of playing significant snaps in the rotation. Xavier Thomas is all but a shoo-in to replace Clelin Ferrell at one end, but at the other, watch for competition between K.J. Henry and Justin Foster, with Justin Mascoll in the mix as well. Early enrollee Tyler Davis, No. 58 in the ESPN 300, could also make an impact inside.

Polite also came out of nowhere to have a breakout season in 2018, and now Florida defensive coordinator Todd Grantham must find a way to match or exceed the production that unit is losing from Polite (19.5 tackles for loss, 11 sacks and 6 forced fumbles). Jeremiah Moon is going to be limited this spring, so watch for Andrew Chatfield or Louisville transfer Jonathan Greenard. But add this wild card into the mix: Jabari Zuniga, who plays on the opposite side, could end up as the biggest beneficiary depending upon how Grantham draws up his aggressive schemes. If Zuniga shows the most promise of the defensive ends this spring, then he could be the player who ultimately makes the biggest impact.

Bush made a remarkable impact on the Michigan defense the past three seasons. Beyond his athleticism, speed and versatility (79 tackles, 9 tackles for loss, 6 pass breakups), he also called the defense, had a knack for always being around the ball and brought intangibles that allowed him to rise up and become an All-American and the best defensive player in the Big Ten. Replacing him won't be easy if the team's bowl performance without Bush is any indication. On paper, Josh Ross appears to be the leading candidate to start at middle linebacker. Defensive coordinator Don Brown began grooming Ross to take over for Bush last season. But beyond Ross, watch for Cameron McGrone, an ESPN 300 prospect in the class of 2018 who redshirted last season.

There are big holes to fill across the entire defense, including those left behind byJulian Love and Jerry Tillery, but linebacker is an area where the Irish don't have much in the way of players ready-made to step in -- or developed depth, for that matter. That is why spring practice will be so intriguing for the Irish, who are expected to use many different combinations to figure out what will work best headed into the season. Among the players to watch: Bo Bauer, Jordan Genmark Heath, Jonathan Jones and possibly even Asmar Bilal, who could move in from the rover position (as the Irish did with Tranquill).

The Nittany Lions also have a lot of starting holes to fill, but running back is among the most intriguing, if only because they have lost terrific players in Sanders and Saquon Barkley in consecutive seasons. Penn State has stocked up some serious talent at the position -- the question is, which one of these backs will end up getting the starting job? Will it be Ricky Slade, who played last season as a true freshman and averaged 5.7 yards per carry? Or ESPN 300 true freshman prospect Noah Cain, an early enrollee with his eyes on the job? How about Notre Dame transfer CJ Holmes, now eligible, or Journey Brown? Another ESPN 300 prospect, Devyn Ford, enters the mix for fall practice. There seem to be plenty of options, and for a program that has relied so heavily on its powerful run game, that's a good thing. Spring practice won't offer enough time to sort out the depth chart.

The Longhorns got great news when Collin Johnson announced he would return to school for his senior season, and there is plenty of talent among this group. But replacing Humphrey in the slot presents the biggest challenge for the offense. Humphrey led the team in receptions and receiving yards, and was a huge matchup advantage thanks to his size. If the NCAA grants incoming true freshman Bru McCoy a waiver to play right away, he would be a natural fit in the offense this season. He's in for spring, and so is ESPN 300 receiver Jordan Whittington, another possibility. Among the veterans already on the roster, Joshua Moore would appear to be at the top of the depth chart, but there's plenty of room for flexibility here, too. Texas is deep across the board at receiver, so the coaches could move outside receivers into the slot to increase their options.

Gaskin did so much for Washington over the length of his career, finishing as the school's all-time leading rusher and one of two backs in NCAA history to rush for at least 1,200 yards in all four seasons in which he played. So finding a back with his production, speed, toughness and durability is not going to be an easy task this spring. The good news is that the top three backs behind Gaskin all return: Salvon Ahmed, Sean McGrew and Kamari Pleasant each rushed for over 200 yards last season. Whomever emerges as the starter might not matter if they decide to go running back by committee. But the competition between the three this spring should be intense regardless.
Report a correction or typo
Related topics:
sportsespnposition battleswashington huskiescollege footballalabama crimson tidenotre dame fighting irishtexas longhornspenn state nittany lionsclemson tigersmichigan wolverinesflorida gators
Copyright © 2022 ESPN Internet Ventures. All rights reserved.
TOP STORIES
10 shot, 2 fatally, on Near North Side
13-year-old carjacking suspect critically injured in police shooting
City Council to take up ordinance on curfew changes
Marine veteran seriously injured in Irving Park hit-and-run
Teen shot and killed in vehicle on Far South Side ID'd by ME
Motorcyclist strikes, kills man crossing street on NW Side, police say
CTU votes for new president
Show More
Disney celebrates National Streaming Day with drone show over DTLA
City Council committee to vote on NW Side casino plan
Funerals begin for victims of Buffalo supermarket shooting
Could remains in shrinking Lake Mead be tied to Chicago mob?
Oakbrook Terrace fights back after red light camera permit revoked
More TOP STORIES News