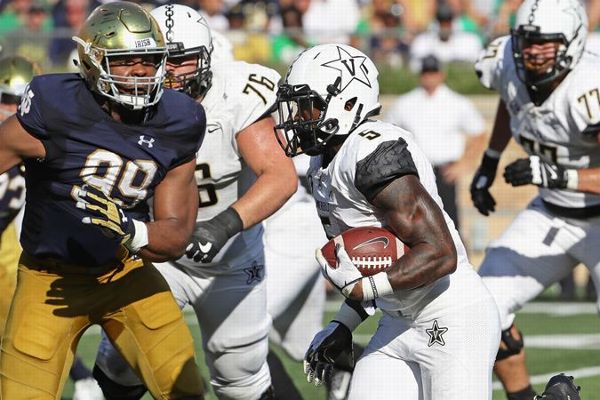 Vanderbilt coach Derek Mason on Wednesday brushed off comments by Notre Dame's Brian Kelly about cut-blocking and "bad football" from the Commodores during Saturday's game.

"Brian Kelly can take his comments and keep it moving," Mason said during the SEC coaches' teleconference. "If he has something personal with me, he can come see me."

Kelly on Tuesday said Notre Dame tight end Alize Mack "was getting cut [blocked] maliciously" by one of Vanderbilt's defensive linemen during a 22-17 Fighting Irish win at Notre Dame Stadium.

"It's legal, but it's bad football," Kelly said. "It's just bad football, and I have no problem saying it. You know, we're so concerned about frontal cuts and we got a defensive end chopping [Mack] on every play, and he hung in there every play, was digging him out, blocking in line."

According to NCAA rules, blocks below the waist must come within 5 yards of the line of scrimmage and come from the front of the player being blocked, unless the block is delivered by an interior lineman. Cut-blocking rules are typically designed to protect defensive players being blocked.

"I don't care much about Brian Kelly's comments about football," he said. "From the holding to the post-chops by Notre Dame, I thought it was bad football on their part."