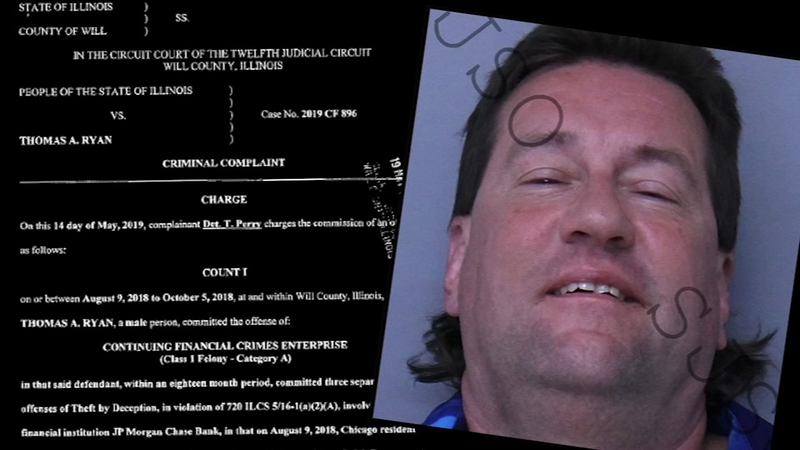 Chicago (WLS) -- A popular ticket scalper who goes by the name "Tommy Tickets" has gotten his own ticket to jail.

The ABC 7 I-Team has received multiple complaints about Tommy Ryan. Consumer investigator Jason Knowles talked to some of his former customers, who said they're hoping a new indictment will mean curtains for Ryan's scalping career.

Ryan is now jailed in St. John's County, Florida, fighting extradition to Illinois. Will County prosecutors are asking Governor JB Pritzker for what's called a "governors warrant" to bring him back to face three felony counts of continuing a financial crimes enterprise.

The complaint alleges Ryan committed three separate theft by deception offenses within an eighteen month period, allegedly taking more than $1,600 from three people. One is a resident of Will County and two are residents of Cook County, including Heather Underwood.

"I quick-paid him and he never delivered. It was all these broken promises and it was very upsetting," she said.

In February, Underwood alerted the I-Team to Ryan, who calls himself "Tommy Tickets."

"I go into the ticket office and, you know, nothing," Underwood said at the time.

She said she lost $400 after paying Ryan for J. Cole concert tickets. But Underwood told the I-Team that Ryan sent her an electronic payment refunding that $400 this past Monday.

Producers from the popular courtroom-reality show "Judge Judy" reached out to Underwood last month so the famous TV judge could adjudicate her claim against Ryan. But last week, the show told her Ryan backed out.

The I-Team exposed five other complaints in their first report. The customers said they gave Ryan money for tickets to plays, concerts and sporting events and got nothing in return.

The I-Team has also found that Ryan isn't new to the justice system. Cook County records show he's been convicted of five charges related to taking people's money and not delivering tickets.

If Ryan is extradited from Florida, he'll face a judge in Will County for the financial crime charges. He was picked up in Florida on his Illinois warrant.