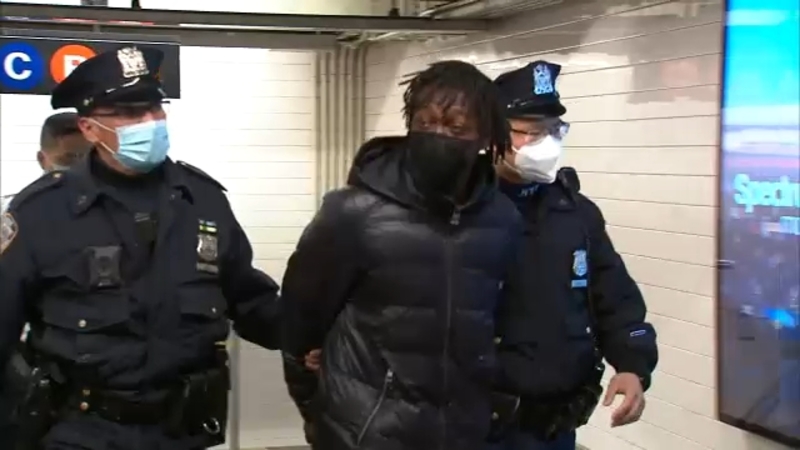 TIMES SQUARE, Manhattan -- A man who was arrested with a semi-automatic rifle in Times Square Friday, has been arraigned and charged.

Saadig Teague was arraigned Saturday afternoon, a day after police say officers spotted the 18-year-old around 12:30 p.m. inside the Times Square ACE subway station, outside the turnstiles.

A man who was arrested with a semi-automatic rifle in Times Square Friday, has been arraigned and charged.

Officers recovered an AK-47 magazine with 17 live rounds in it and one loose round inside Teague's shopping bag. A scale used for drug paraphernalia was also recovered from Teague's backpack.

Teague was sitting on the ground, charging his cell phone, and the gun was in plain view, according to police. He told police the gun is registered in Ohio and it was not loaded.

Officers found ammunition in a bag next to him.

Dermot Shea applauded the officers who arrested Teague, tweeting "This story could've had a tragically different ending, but thanks to these diligent cops it ends with the suspect in handcuffs."

.@NYPDTransit cops on “routine” patrol in the @TimesSquareNYC subway station recovered this AK-47 & a loaded magazine from an 18 y/o from Ohio.

This story could’ve had a tragically different ending, but thanks to these diligent cops it ends with the suspect in handcuffs. pic.twitter.com/SkSyBzMdfV

The man told officers he believed his possession of the weapon was legal in the city because it was registered and not loaded.

Police say he had an Ohio identification in his possession.

"Obviously we defer to the NYPD. It's a troubling situation. I have no doubt that they're on top of it and they'll get to the bottom of it, but obviously, anything like that in our system is totally unacceptable," Interim NYC Transit President Sarah Feinberg said.

A senior police official says they do not believe this was a foiled terror plot, but they are still investigating.

Law enforcement officials are looking into the relationship between the suspect and 43-year-old Andrew Teague who was killed in a police-involved shooting in Columbus, Ohio last month.

Andrew Teague was involved in an extensive police chase after officers attempted to arrest him for a warrant for felony assault charges.

(Previous coverage) NJ Burkett reports on the NYPD officer who allegedly plotted to kill both her estranged husband and the daughter of her boyfriend.