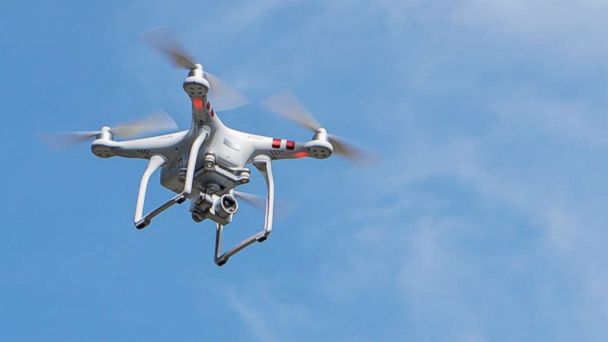 It wasn't a UFO -- or bird, or plane -- stalking the skies over northern New Jersey Tuesday night.

The unidentified flying object was actually a police drone being used to search for two suspects who robbed a Home Depot, according to the Township of Union Police Department.

Police received a 911 call around 5:49 p.m. Tuesday and reported that the suspects fled with stolen merchandise after one of them pulled a knife on a store loss prevention employee, the department wrote on Facebook.

The Home Depot employee observed the suspects get into a Lexus and try to flee the scene.

The suspects attempted to allude a marked police car that followed it and abandoned the vehicle after striking the curb twice near the entrance to the Garden State Parkway, according to authorities.

Union Police Sgt. Dan Hanselmann was able to tackle the driver and took him into the custody, but the passenger jumped over a guardrail and headed toward the Kawameeh Swamp, prompting a large-scale search for him, police said.

The man was not found after a search that lasted several hours in the heavily wooded area, police said.

A video posted to Twitter Tuesday around 8 p.m. showed a device with blinking lights hovering over the Garden State Parkway.

People were calling into the News12 New Jersey newsroom to report the possible UFO sighting, the station tweeted.

The driver of the Lexus, identified as 45-year-old Rashon Plant, told Hanselmann that the other suspect was armed with a gun or knife and carjacked him, police said. Investigators determined that the driver was part of the shoplifting plan after reviewing the surveillance video from The Home Depot, police said.

Police found about $2,000 worth of various tools in the truck, police said.

Plant was charged with robbery, eluding police and "various drug charges" for possession of heroin and cocaine, police said.

Investigators are still trying to identify the suspect who got away.