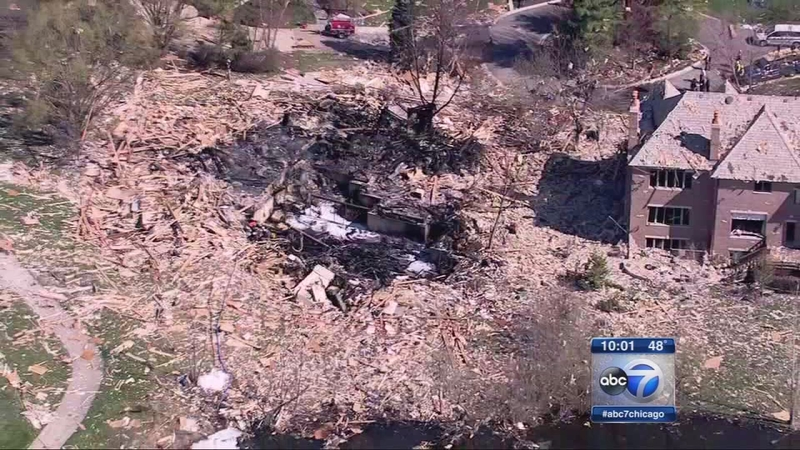 LONG GROVE, Ill. (WLS) -- North Shore Gas is beginning to restore service to some customers in a gated community that was heavily damaged from a large explosion Friday night in northwest suburban Long Grove.
Long Grove house explosion, fire
A home exploded and caught fire in Long Grove late Friday, April 25, 2014. That house was leveled, and 30 others in the area were damaged.
The blast appears to have been caused by a natural gas leak, which reduced the home to rubble and damaged many others around it.

The house was located on Trenton Court inside the Royal Melbourne Country Club. North Shore Gas is restoring service to 30 customers along nearby Wellington Drive after testing, though six premises on Trenton Court will remain off as the investigation continues, according to a statement.

"Several hours of testing took place on our infrastructure to ensure safety and reliability for our customers," North Shore Gas said in the release.

The house at the end of Trenton court is gone, leveled by a blast so powerful it was felt, with force, 20 miles away. Within a half mile radius, people came out of their homes Friday as shards of wood and insulation fell from the night sky.

"When we saw the debris falling, we thought a plane had exploded," said Sunit Jain.

"They kind of bounced up and down. Things fell all over the place," she said.

"You couldn't see anything. Everyone was coughing," said Courtney Bruckman.

Lily and her friends saw when they came outside that the Shiner house at the end of the cul de sac was gone, flames devouring the wreckage. And the hiss of a natural gas fed flame still burning like a torch.

By morning light, from above, the force of the blast was clear. It had reduced a home to a smoldering crater. It was the home of Sheryl Shiner. She'd just brushed her teeth before bed Friday night, heard a pop, and saw a glow of flame below her bedroom window. She Called 911.

"(She) grabbed her coat, started walking across the street to a neighbor's house, probably about 100 feet from the door when the explosion occurred," said Countryside Fire Protection District Chief Jeff Steingart.

Remarkably, Shiner escaped with only scratches. It is, she says, too fresh to talk about.

At least six nearby houses, in a subdivision of million dollar plus homes, suffered severe damage. Those residents have had to find temporary quarters elsewhere. Some 50 homes were left with broken windows, doors, damaged roofs.

Saturday afternoon some of Lily Marks' Stevenson High School friends came to help clean up. They, like everyone here, amazed that the only physical injuries were a couple of scratches.

"So thankful for that, because this was such a big situation. Really lucky," said Tori Bar-shalom.

There is still quite a bit of clean up and rebuilding ahead. The immediate task is some detective work by the gas company, the ATF, as well as the state fire marshal.