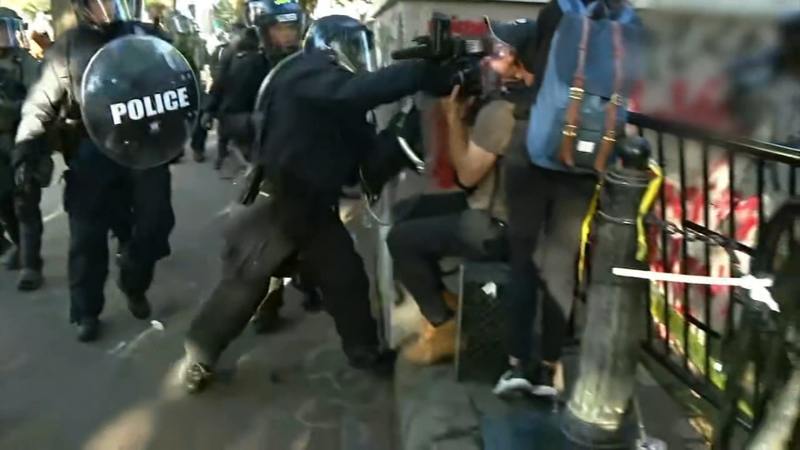 Differences in police treatment of Trump rioters, BLM protesters do not go unnoticed

CHICAGO (WLS) -- From politicians to community organizers to regular people, many in the Black community and beyond have noted stark differences between the police treatment of the pro-Trump mob that stormed the U.S. Capitol and Black Lives Matter protesters last summer.

"If that had been a group of Black Lives Matter protesting, they would have been treated very, very differently than the mob of thugs that stormed the capitol," President-Elect Joe Biden said.

That contrast was not lost on many in the Black community, who recall a much different scene from last June. Then, hundreds of officers in riot gear fired tear gas and physically beat people during a mostly peaceful Black Lives Matter demonstration in Washington D.C. as they cleared a path for President Trump to walk from the White House to St. John's Church down the street for a photo op of him holding a bible.

"People who've been protesting just for Black people to have the right to exist without being murdered by police were brutalized, greatly, this summer. Who, you know, compared to the storming of the capitol, that was like a slap on the wrist," said Amika Tendaji, Black Lives Matter Chicago.

Experts point to research that suggests law enforcement treats liberal-leaning protests much differently than conservative ones.

"The level of lenience that protesters were met with just reminded that one reality in this country is that this reality of presumption of innocence for some people and a presumption of guilt for others," said Reuben Jonathan Miller of the University of Chicago.

Rainbow PUSH Coalition founder and Civil Right icon Rev. Jesse Jackson said it's been that way for decades, but has gotten worse under President Trump.

"He has encouraged this behavior. He never challenges them," he said.