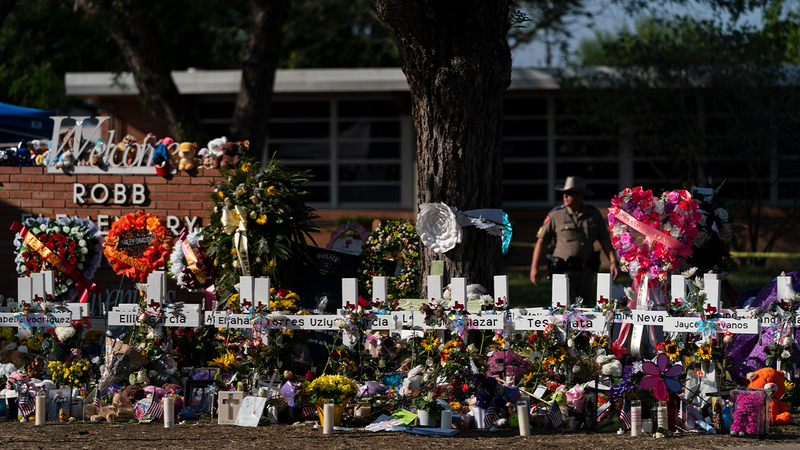 "We're not going back to that campus," Harrell said during a special meeting of the board of trustees, and added he expects to have a new address for the school in the "very near future."

"Our kids, our staff, we're not going back."

About a week and a half before the meeting, an 18-year-old gunman walked into the elementary school and killed 19 students and two teachers in the deadliest school mass shooting in nearly a decade.

The superintendent's reassurance followed a tearful mother who spoke to the panel and pleaded for incoming second graders who were set to attend Robb Elementary to be relocated, saying through sobs her son has been traumatized by the violence.

"My son is deathly afraid of school now," the mother said. "What he knows right now is that when he goes to another school he's going to get shot by a bad man."

As a traumatized community is reeling from the senseless violence, many questions about the massacre remain and authorities have often given conflicting information about how exactly the attack unfolded. Among the unclear details: how the gunman got inside.

Initially, the Texas Department of Public Safety said a teacher had propped a door open -- only to later say the teacher closed the door when she realized there was a shooter on campus.

A teacher who made peace with dying

Emilia Marin, an educator at the elementary school was walking outside the school on May 24 to help a co-worker bring in food for an end-of-the-year party when she saw a vehicle crash, according to her attorney.

What followed next would be "the most horrific thing anyone could have endured," her attorney Don Flanary told CNN.

Marin went inside the school to report the crash and had left the door propped open with a rock, according to Flanary, who is assisting Marin with a possible civil claim against the makers of the weapon used in the slaughter.

When Marin returned to the door -- still on the line with 911 operators -- she saw her co-worker fleeing and heard people across the street at a funeral home yelling, "He's got a gun!"

Marin saw the gunman approach, Flanary said, so she kicked the door shut and ran to a nearby adjoining classroom, huddling underneath a counter.

It was there Marin heard gunshots, Flanary said; first outdoors, then inside the school. Her 911 call was disconnected. She grabbed chairs and then boxes to help conceal her location. She tried to be still.

"Frozen" in fear, Marin received a text from her daughter asking if she was safe. "There's a shooter. He's shooting. He's in here," Marin wrote back, according to her lawyer. Moments later Marin wrote she could hear the police.

Marin had to eventually silence her phone, convinced the gunman would hear her, said her attorney, who added she heard "every single gunshot" fired in the school.

"She thought he was going to come in and kill her, and she made peace with that," said Flanary. "She did think that she wasn't going to make it out alive."

The gunman targeted another classroom and never encountered Marin, her attorney said. Her grandson, who is a student at Robb Elementary, also was elsewhere and survived. Yet Marin's ordeal soon was exacerbated in the days following the shooting after authorities said the gunman gained entry into the school through a door left propped open.

"She felt alone, like she couldn't even grieve," Flanary said. "She second-guessed herself, like 'did I not do that?' " he added.

DPS later clarified the shooter had entered instead through an unlocked door. The entire experience, however, has taken a toll on her mental health, Flanary said. She's had to see a neurologist because "she can't stop shaking," he said.

Flanary said investigators told Marin, "No, we watched the video, you didn't do anything wrong."

Asked if Marin will return to the classroom, Flanary said: "I don't think she's ever going to be able to set her foot on a school campus again."

While Marin has no plans to sue the school, police or school district, Flanary said, a petition was filed Thursday to depose Daniel Defense, the manufacturer of the firearm used in the attack, according to a court filing obtained by CNN.

The pre-suit petition does not accuse the gun manufacturer of any wrongdoing but seeks to investigate whether the Petitioner has any basis to file a claim against Daniel Defense. CNN has reached out to Daniel Defense for its response to the filing.

'There is a lot of bodies'

Details of the carnage continue to emerge more than a week later.

A student inside Robb Elementary the day of the shooting called 911 fearful for her life and for her teacher, according to a transcript of the call reviewed by the New York Times.

"There is a lot of bodies" 10-year-old student Khloie Torres told the dispatcher, according to the paper.

The call was made at 12:10 p.m., more than 30 minutes after the shooting began inside the school.

The call lasted for 17 minutes and 11 minutes into it, he sound of gunfire could be overheard, the Times reported.

On Friday, lawyers for the father of shooting victim Amerie Jo Garza, 10, also demanded answers from the gun manufacturer.

A letter issued on behalf of Alfred Garza III asked the maker of the AR-15 style rifle used in the massacre to provide all marketing information, particularly strategy aimed at teens and children, according to a statement from the attorneys.

The statement said Garza's Texas lawyers, Mikal Watts and Charla Aldous, have teamed up with Josh Koskoff, who represented nine Sandy Hook Elementary School shooting families in a $73 million settlement against Remington, the maker of the AR-15 used in the 2012 school shooting.

"She would want to me to do everything I can, so this will never happen again to any other child," Alfred Garza III said in the statement. "I have to fight her fight."

In addition to marketing and advertising strategies, the attorneys are asking Georgia-based Daniel Defense for information relevant "to your incitement and encouragement of the assaultive use of these weapons; to your on-line purchase system; and to your communications, on any platform, with the Uvalde shooter; and to your awareness of the prior use of AR-15 style rifles in mass shootings."

"Daniel Defense has said that they are praying for the Uvalde families. They should back up those prayers with meaningful action," Koskoff said.

Attorneys representing Kimberly Garcia, Garza's mother, also sent a letter to Daniel Defense, demanding the company "preserve all potentially relevant information" related to the shooting, which includes but is not limited to "all physical, electronic, and documentary evidence potentially relevant to" the company's marketing of AR-15 style rifles.

Daniel Defense has not replied to multiple requests by CNN for comment.

On its website Daniel Defense said it will "cooperate with all federal, state, and local law enforcement authorities in their investigations" and referred to the Uvalde shooting as an "act of evil."

Survivors of Uvalde and Buffalo shootings to testify

Next week, survivors and others affected by the recent shootings in Buffalo and Uvalde will testify before the House Oversight Committee, according to the committee's website. An 18-year-old gunman opened fire in a Buffalo, New York, supermarket on May 14, killing 10 people in a racist attack.

The announcement of the Washington hearing came on the same day a Texas state legislator established a committee to "conduct an examination into the circumstances" surrounding the Uvalde shooting.

"The fact we still do not have an accurate picture of what exactly happened in Uvalde is an outrage," Texas House Speaker Dade Phelan, a Republican, said in a statement Friday.

Investigators from local, state and federal agencies say they are working to determine more about the circumstances behind the Uvalde shooting.

Search warrants have been issued for the shooter's cellphone, vehicle and his grandparents' home, court records obtained by CNN show. The warrant gives investigators the authority to perform a forensic download of the cellphone -- which was located next to his body -- in search of a motive.

Yet criticism continues over whether authorities responded quickly enough to neutralize the gunman as well as the lack of transparency from some law enforcement officials following the shooting.

According to a timeline released by Texas DPS, several 911 calls were made by children inside the classroom where the gunman was located, all while police were stationed outside the room.

A Texas state legislator raised questions at a Thursday news conference about whether information on 911 calls from inside Robb Elementary was properly relayed to responders at the scene.

State Sen. Roland Gutierrez said he spoke with the agency which regulates the 911 calls, the Commission on State Emergency Communications, and was told the 911 calls were handled by and relayed to the city's police force on the scene. However, what is unclear is if the information was relayed to the school district police chief, who was the incident commander on the scene.

"They were being communicated to a Uvalde police officer and the state agency that I have spoken to has not told me who that is," Gutierrez said.

Gutierrez also said he wants to know more about what was happening at the school that day.

"I want to know specifically who was receiving the 911 calls," he said.