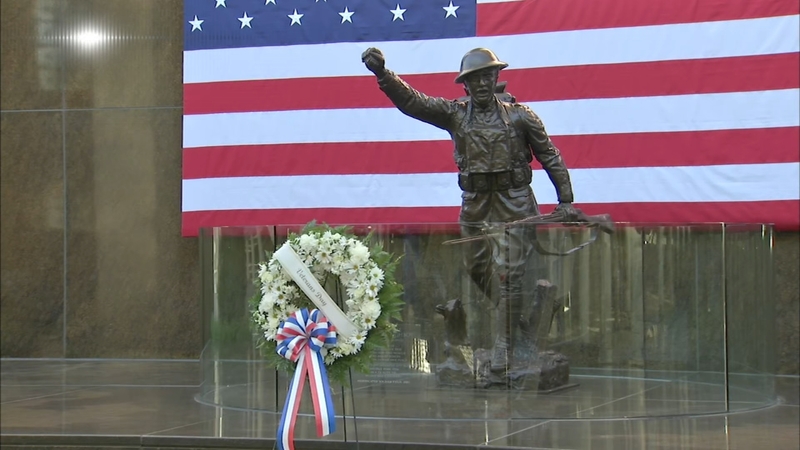 CHICAGO (WLS) -- A number of events across the Chicago area are marking Veterans Day Wednesday, with many ceremonies taking place virtually due to the COVID-19 pandemic.

Grtinston noted how service men and women are supporting COVID efforts along with civil unrest in locations throughout the country.

"The veterans of your military right now are out there protecting everybody in America, around the globe, whether that's at home or abroad," Sergeant Major Grinston said.

Grinston reminded those young people in that virtual call this morning to thank any veteran they meet for their service. He also reminded them think about all of the service men and women who are currently deployed overseas.

In previous years, veterans would travel to local schools in Mt. Prospect speaking to students about their service. This year veterans produced a program featuring a mostly live television feed over the village's cable channel. It is also available on the village's Youtube channel

The city of Aurora also hosting a virtual ceremony with American Legion Post 84. Mayor Richard Irvin is a veteran himself. The ceremony can be viewed at https://www.facebook.com/cityofaurorail.

The city of Chicago will hold a virtual ceremony, which will stream on Mayor Lori Lightfoot's Facebook page at 11 a.m. and the DCASE Youtube channel.

The ceremony was recorded in the Grand Army of the Republic Hall at the Chicago Cultural Center, Hubbard High School and the Victory Monument at 35th Street and King Drive in Bronzeville.

There will also be a wreath-laying ceremony at Soldier Field. Because of the pandemic, the event will be smaller than it's been in the past.

Soldier Field is the largest war memorial in the state of Illinois.

In Arlington Heights, there will be a Veterans Day Car Parade. The parade will go through the center of the Luther Village complex and go around the perimeter and each veteran will get a gift bag.

The village of Schaumburg and the Veterans of Foreign Wars Post 2202 will hold a ceremony at Veterans Gateway Park Town Square at Schaumburg and Roselle roads at 10:45 a.m.

Orland Park will host ceremony will be held outdoors and names will be engraved in the village's granite walls bordering their veterans' memorial at 14700 S. Ravinia Ave.

In Palatine, the American Legion Post 690 will host an in-person gathering at Community Park at Wood and Northwest Highway. Masks must be worn and social distancing observed.

The Chicago Wolves and the 85th Army Reserve Support Command will host a wreath-laying at the Vietnam Veterans Memorial on the Chicago Riverwalk. Wayne Messmer will perform the National Anthem and Brigadier General Ernest Litynski and U.S.. Marine Corps Brigadier Gen. Roger Machut will speak.
St. Charles North High School will host a virtual concert paying tribute to veterans. The concert can be seen at http://scnmusic.com/.

The Archdiocese of Chicago is unveiling an online photo exhibit of former World War II Chaplain Rev. John Beyenka. The exhibit can be viewed at https://archives.archchicago.org/photo-exhibit/fr-john-beyenka.