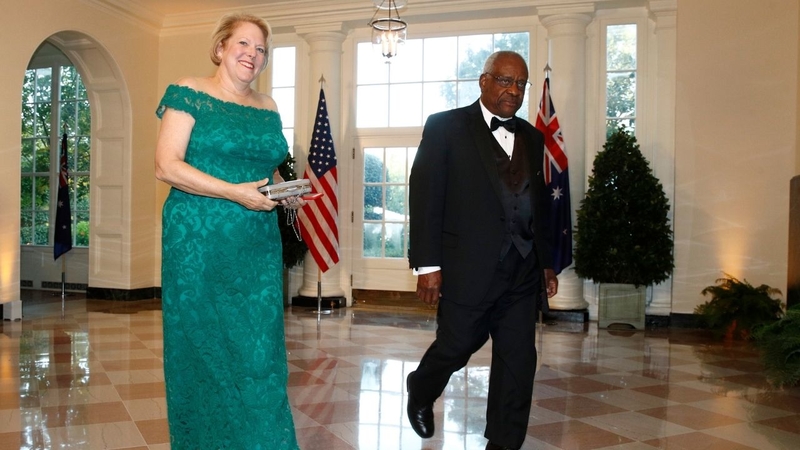 In the fall of 2020, after Joe Biden defeated Donald Trump in the presidential election, Virginia "Ginni" Thomas, the wife of Supreme Court Justice Clarence Thomas, repeatedly urged White House Chief of Staff Mark Meadows to attempt to overturn the election results, according to text messages obtained by congressional investigators.

"Help This Great President stand firm, Mark!!!" Thomas wrote to Meadows on Nov. 10 after the election was officially called for Biden. "You are the leader, with him, who is standing for America's constitutional governance at the precipice. The majority knows Biden and the Left is attempting the greatest Heist of our History."

Sources familiar with the text messages, which were obtained by the House select committee investigating the Jan. 6 Capitol attack, confirmed their authenticity to ABC News. The content of the messages was first reported by The Washington Post and CBS News.

Meadows, who did not respond to all of Thomas' missives, texted in late November that Trump's challenge of the election results was "a fight of good versus evil."

"Evil always looks like the victor until the King of Kings triumphs," he wrote. "Do not grow weary in well doing. The fight continues. I have staked my career on it. Well at least my time in DC on it."

"Thank you!! Needed that! This plus a conversation with my best friend just now ... I will try to keep holding on. America is worth it," Thomas replied.

The messages -- more than two dozen between Thomas and Meadows in November of 2020, and one from Jan. 10 -- were among the thousands of pages of text messages, emails and documents Meadows voluntarily turned over to the committee last year, before he reversed course and decided not to cooperate with the inquiry.

Thomas did not respond to a request for comment from ABC News. A spokesman for the committee declined to comment on the messages or their contents.

Thomas, a longtime conservative activist, told the Washington Free Beacon in March that she and her husband don't talk to each other about their work.

ABC7 Legal Analyst Gil Soffer talk about the text messages from Virginia Thomas and what this could possibly mean for upcoming Supreme Court decisions involving Trump.

"Like so many married couples, we share many of the same ideals, principles, and aspirations for America," Thomas told the conservative news outlet. "But we have our own separate careers, and our own ideas and opinions too. Clarence doesn't discuss his work with me, and I don't involve him in my work."

Thomas said that she attended the "Stop the Steal" rally outside the White House on Jan. 6, but left early because it was cold. She said she had no role in planning the event.

Regarding the attack on the Capitol, Thomas told the Free Beacon she was "disappointed and frustrated that there was violence that happened following a peaceful gathering."

Ethics experts have raised questions about Thomas' work on major issues that come before the Supreme Court, on which her husband sits.

In January, the court declined to block the Jan. 6 committee from obtaining Trump White House records over the objection of only one justice: Clarence Thomas.

"There were some eyebrows raised when Justice Thomas was that lone vote," said Kate Shaw, ABC News Supreme Court analyst and Cardozo Law professor. "But he did not explain himself, so we don't actually know why he wished to take up the case."

There are no explicit ethics guidelines that govern the activities of a justice's spouse, experts say, but there are rules about justices avoiding conflicts of interest. Federal law requires that federal judges recuse themselves from cases whenever their "impartiality might reasonably be questioned."