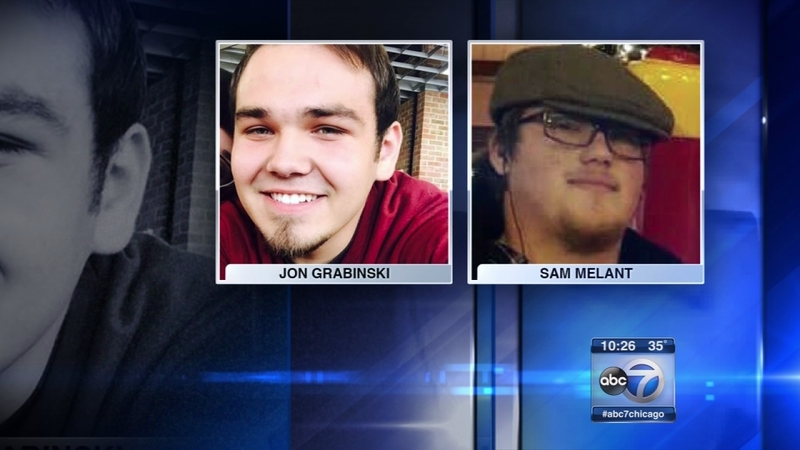 Investigators said the teen's SUV left the road and struck a tree while traveling along a bend in the road in the 9400-block of South Archer Avenue.

The victims were identified as Salvatore Melant, 18, Jonathan Garbinski, 17. The boys were pronounced dead at the scene.

Friends said they were childhood friends.

Police haven't determined what caused the crash, but the road conditions were icy. Saturday night, friends cried and hugged as they placed flowers and mementos at the spot where the Ford Explorer crashed. Ironically, the vehicle crashed into a cross marking the spot of another fatal accident at that location.

Grabinski was a junior at Richards High School in Oak Lawn. Ty Hartin, superintendent of Community High School District 218 in Oak Lawn said in an email: "We are shocked and saddened by this tragic accident and by the passing of Jonathan Grabinski. We will keep Jonathan and his family in our thoughts and prayers and we will offer any support we can to his family, his friends, and to the entire Richards High School community. Whenever we lose a student we lose a part of ourselves as well. Our hearts go out to the Grabinski family during this very difficult time."

An hour before this happened he was sending me pictures of himself smiling in the car," said friend Tyler Guerin. "I woke up this morning to 100 missed calls."

Melant was a 2015 graduate of St. Laurence High School suburban Burbank. In an email, school principal Jim Muting said: Sam Melant was an awesome young man. He was a member of our band and student maintenance crew. He would help out at school events with his dad who was vice- president of STL Fathers' club. The entire St. Laurence community is mourning the loss of Sam. Our prayers go out to Sam and his family." He added that Melant's death was the third tragic death of school alum in recent months.

"They both had amazing hearts and they are going to be missed so much," said friend Sally Wendt.