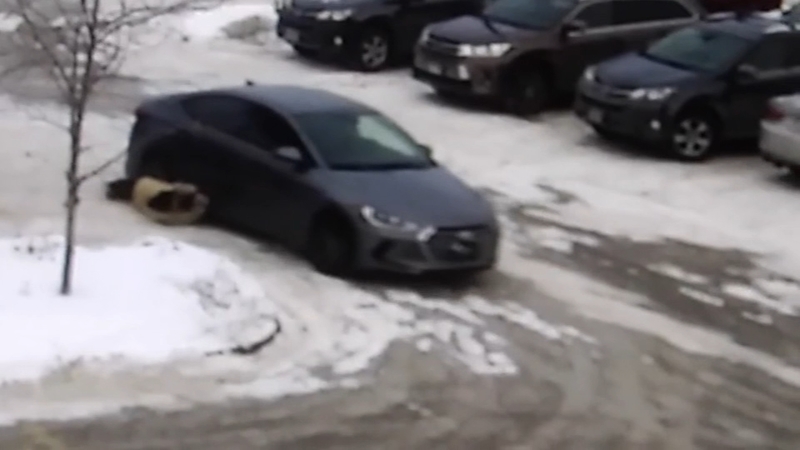 ST. PAUL, Minn. -- A 53-year-old woman was grabbed, punched and eventually dragged roughly 75 yards by a vehicle during a violent purse-snatching incident in Minnesota. It was all caught on video.

Dia Lor had just finished shopping Sunday at a Hmong shopping center in St. Paul, Minnesota, and was loading items in her car, when she was approached, KSTP reported.

"I noticed he came from behind me and everything happened so quick," said Cha Lor, Dia Lor's nephew, who was acting as a translator.

An individual punched Lor, slammed her to the ground and grabbed her purse. Then, he got back in his car and closed the door, but Lor was still hanging on. She was dragged about 75 yards.

"All I know is if I hold onto it longer the car could possibly run me over or I could possibly be injured elsewhere so I let go," Cha Lor said for his aunt.

The robbery suspect stole her purse and all the money she had been saving for Christmas gifts.

But Dia Lor has not been the only victim.

"We've had more than 20 cases that are similar to the ones last Sunday," St. Paul police spokesman Steve Linders said.

Police put together a list of other purse snatchings with similarities: the suspects, driving stolen cars, target unsuspecting women with purses who are alone, outside of various retail stores throughout St. Paul. It's been going on since Nov. 20.

"The suspects have hit them, struck them with fists and have threatened to shoot them; they've certainly intimated they had a gun on them," Linders said.

Dia Lor said she is bumped and bruised, and her spirit is broken.

"I'm too scared and too vulnerable right now; I don't know how to speak my feelings," her nephew said for her.

Police said the suspects had hoodies pulled tight concealing their faces, and since the cars are stolen, there's no link to the suspects.