WLS
1 / 2
An image one Twitter user made of a concentration camp uniform, left, and the shirt offered by Zara, right.
Carolinafarraj / Twitter
Zara is a clothing retailer offering upscale attire for men, women and children. But the company faced a social media uproar after it was noticed that one of their shirts resembled attire Jews were forced to wear during the Holocaust.

In the image below, you can see a uniform worn by Jews during the Holocaust next to Zara's "Striped 'sheriff' t-shirt" uploaded by a Twitter user. 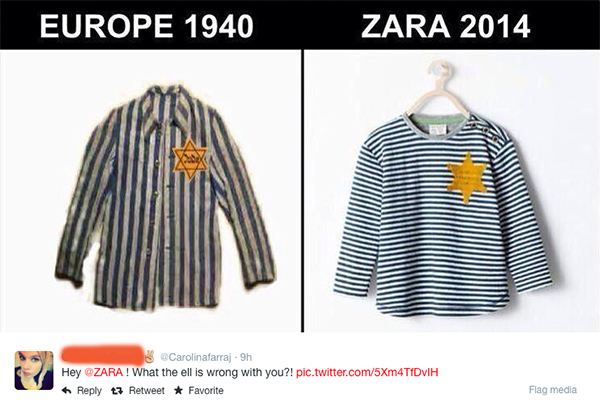 While Zara states they intended for the star to resemble what a sheriff might wear in the Old West, their shirt bore striking resemblance to the yellow star or yellow patch that Jews were forced to wear in Nazi Germany and during the Holocaust.

Zara tweeted an apology Wednesday morning after receiving immense backlash over the shirt, no longer offering it online and pulling it from stores.

After receiving social media backlash, Zara offered an apology over the pajamas

But that hasn't stopped social media users from offering their own comments on Zara's Facebook and Twitter feeds.

Some have come to support Zara though, noting that the uniforms victims wore in concentration and extermination camps had vertical stripes, not horizontal.

This isn't the first time that Zara has received controversy over their clothing being offensive or anti-Semitic. In September 2007, the retailer withdrew a handbag from its stores after swastikas were revealed on the item.