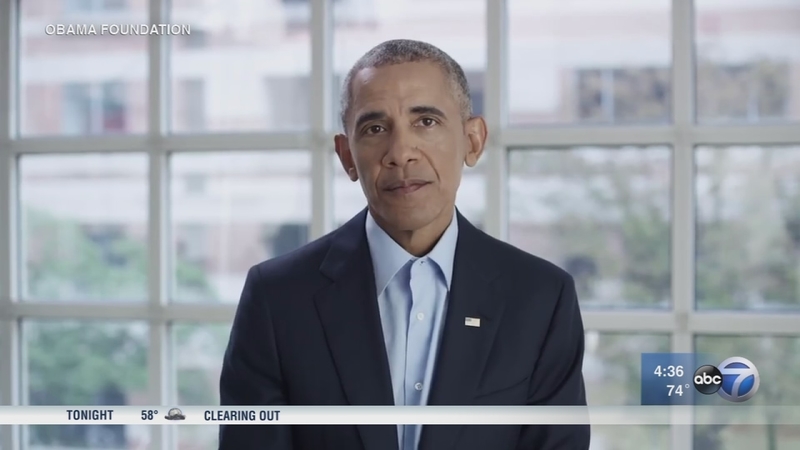 CHICAGO (WLS) -- The Obama Foundation is holding a community meeting Thursday seeking public input about the Obama Presidential Center (OPC) project that is slated for the city's Jackson Park neighborhood.

The meeting will be held at the Hyatt Regency McCormick Place and open to the public. The foundation said they want to hear from the community and local residents on the development and construction of the center, as well as on how to support civic leaders making positive change in their communities.

The Obama Foundation will be represented at the meeting by Michael Strautmanis, vice president of civic engagement; Louise Bernard, museum director; Tod Williams and Billie Tsien, lead architects for the OPC; and Michael Van Valkenburgh, lead landscape designer for the OPC.

Bus transportation to and from McCormick Place will be available starting at 4:30 p.m. Buses will leave from Hyde Park Academy High School, 6220 South Stony Island Avenue. The last bus will leave at 5:45 p.m.

A coalition of 12 organization plans to sleep out Wednesday night to be first in line at the Community meeting. They want the foundation to commit to protecting affordable housing and creating new jobs -- and they want that commitment in writing.

"In this city and its politics, saying it is not enough. It must be put in writing," said Sharon Payne, of the Obama Library South Side CBA Coalition.

The Obama Foundation said they want to hear everyone's feedback.

"We want anyone that wants to help us make a positive impact on this community, we want them in the game and we want them participating," said Mike Strautmanis, of the Obama Foundation.

On Wednesday, former President Barack Obama announced via video that the foundation would host a global leaders summit Oct. 31 - Nov. 1. The event aims to empower young people to create change, he said.

"This October, we're bringing together hundreds of leaders from all around the world for a hands-on exchange of ideas in my hometown -- the city of Chicago," the former president announced in a clip on Twitter.

An announcement from President Obama: get ready for the inaugural Obama Foundation Summit. https://t.co/WdBQALg9je pic.twitter.com/TwzsGzzhDj

This leadership summit will be a place to gather and learn from one another and then go back to your communities to lead others in the hard work of change," he said.

The former president will be joined at the summit by his wife, former first lady Michelle Obama.

The summit will welcome hundreds of young leaders to "exchange ideas, explore creative solutions to common problems and experience civic art, technology and music from around the world," according to the Obama Foundation.

Smith plans to be a part of the global summit in October and to keep doing what he does, which includes a new class of fathers going through the parenting and career classes at The Dovetail Project later this month.

CNN Wire contributed to this report.