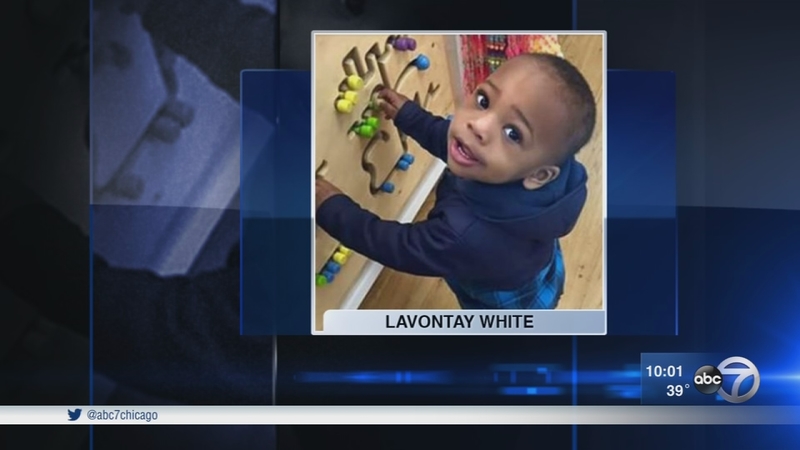 CHICAGO (WLS) -- A man and a 2-year-old boy were killed and a pregnant woman was injured Tuesday afternoon in a shooting on Chicago's West Side.

The boy was identified as Lavontay White, according to the Cook County Medical Examiner's Office. The man's identity was not immediately released.

The three victims were shot while sitting in a car in the 2300-block of South Kenneth Avenue in the North Lawndale neighborhood, police said. They were in an alley between South Kenneth and South Kostner when a man ran up to the car and fired multiple shots into the vehicle.

Police were reviewing a Facebook Live stream that appears to show the shooting and aftermath. In it, a woman and man are seen driving in a car with a toddler visible at times in the back seat. Shots ring out, prompting the woman to run from the car, yelling for help. The police's rundown of the triple shooting closely matches that same narrative.

The community is outraged by the toddler's death.

"Today, Chicago, I want to say happy Valentine's Day, while you're out enjoying your holiday a 2-year-old has been shot and killed on your streets," said community activist Ja'Mal Green.

Chicago police spokesperson Anthony Guglielmi said Lavontay had been resuscitated and was on life support after the shooting, but succumbed to his injuries shortly before 4 p.m. He is the second child shot and killed since Saturday.

CPD has very good leads in the investigation. Detectives are reviewing surveillance video. Tragically, the young boy succombed to injuries

The man was pronounced dead at Stroger Hospital at about 2:45 p.m., according to the Cook County Medical Examiner's Office. He was in his 20s.

No one was in custody Tuesday night.

Chicago Police Superintendent Eddie Johnson, who was visibly angry at the press conference, said the shooter was a documented gang member known to police, and that the man was the intended victim.

"We believe this was a targeted shooting, so these people were looking for him. But it's just ridiculous that we have to keep seeing children pay the price because we can't hold these individuals accountable. I'm sick of it, and I know Chicago is sick of it. I just hope that our legislative partners are sick of it," he said.

Police also believe he was the injured woman's boyfriend.

The woman, who is the toddler's aunt, is in fair condition at Mt. Sinai hospital. Guglielmi said she is pregnant and that both she and her unborn baby were in fair condition after the shooting. They do not know how far into the pregnancy she is, he said.

Police said they would review several other pieces of video and said they have promising leads in their search for the shooter.

"And I hope our legislative partners are looking right now. We have yet another innocent child in Chicago that can lose their life over senseless gun violence. I was promised that we would have some gun legislation in January and it's now the middle of February and it's still not here," Johnson said.

"One victim of one shooting is one too many, but when innocent children are caught in the crossfire of gun violence and young people have their childhood stolen by stray bullets, our consciences are shaken and our hearts are broken. Every parent, regardless of where they live, should be able to take their child for a walk to the park or a ride in the car. These are normal rites of passage of childhood.

These shootings must be a turning point for our city. Anyone with information about these crimes owes it to the families of these children to come forward. Springfield owes it to the residents of this city to finally pass meaningful gun control and sentencing legislation to keep guns out of the hands of criminals and keep repeat violent offenders off our streets. And our criminal justice system owes it to all of us to give violent offenders sentences that match the severity of the crimes they have committed."