Navy Pier: 3 stabbed, more than a dozen others injured in stampede at 4th of July festivities 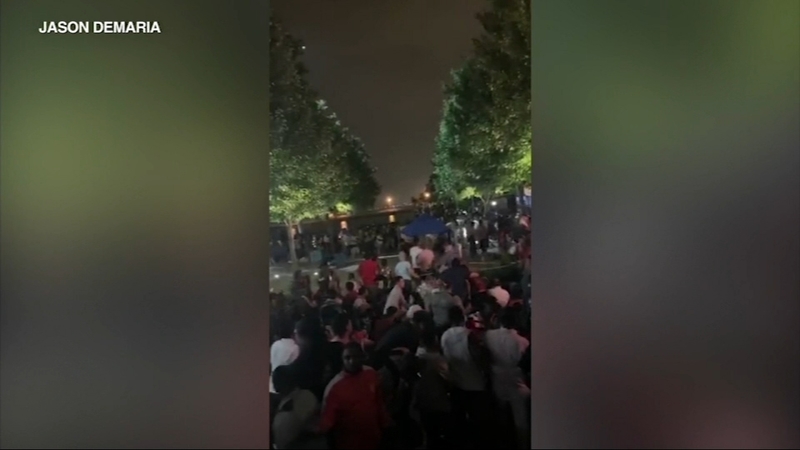 3 stabbed, 14 others injured at Navy Pier 4th of July festivities

CHICAGO (WLS) -- Three people were stabbed and at least a dozen others were injured during the Fourth of July celebrations at Navy Pier, according to Chicago police and fire officials.

'GET DOWN!' Raw video shows chaos at Navy Pier on 4th of July

Cellphone video shows people yelling "get down!" as chaos unfolds at Navy Pier during 4th of July celebrations.

A fight broke out at about 10:10 p.m. near the McDonald's just outside Navy Pier after gang signs were flashed, resulting in three people being stabbed, police said.

CPD investigating several incidents following fireworks at Navy Pier. Reports of a shooting are not accurate. A man punctuated his leg after running into a table, 3 were stabbed following an altercation on the pier & 16 people are hospitalized after being trampled during the exit

A 30-year-old man who was not involved in the fight was stabbed in the face and arm, but could not remember details of the stabbing and did not see the suspect, police said. He was transported to Northwestern Memorial Hospital in stable condition.

Cellphone video shows the chaotic scene at Navy Pier, where three people were stabbed and more than a dozen injured in a stampede on the Fourth of July.

Police said they are currently searching for two suspects in connection with the stabbing.

Meanwhile, about the same time as the stabbing incident and as crowds were exiting Navy Pier, police said they believe someone ignited a firecracker which caused a crowd of people to run out of Navy Pier. Chicago police spokesman Anthony Guglielmi said someone in the crowd yelled that there was a gun.

At a press conference Friday afternoon, CPD Superintendent Eddie Johnson said private security officers assigned to the pier likely mistook the firecracker for gunfire, causing the stampede near Harry Caray's Tavern that injured at least 13 people. None of the injuries appeared to be life-threatening, officials said.

"We had all the protocols in place and resources in place, of course we cannot control someone popping a firecracker off in a large group of people. That's something we can't control," he said, adding that the incident highlights the need to "tighten up communications" with partner agencies.

"We will be in communication with them, have some dialogue, to make sure those things are handled properly," he said. "I don't want to condemn them because they may have thought there was an active shooter."

If there had been an active shooter and security didn't handle the situation accordingly, police would be having a very different kind of press conference on Friday, Johnson added.

A 16-year-old boy punctured his leg after running into a table and was transported to Northwestern Memorial Hospital in stable condition. Authorities initially believed that he had been shot.
Witnesses described a chaotic scene, with parents separated from children, fences collapsing, elderly people falling down.

Mylissa Veal was with her 4-year-old daughter and a cousin at one of the pier's rooftop restaurants and said waiters started telling guests to take cover.

Things can quickly get out of control in huge crowds. ABC's Matt Gutman talked to an expert about surviving the chaos.

"We were on the Seadog and our trip was about to be over and then all of a sudden we just heard the loudest screams and I turned and I saw everybody drop to the ground," said witness Lucila Pulido. "It was the scariest thing ever. Then we saw people running with strollers, there's shoes everywhere, people just ran for their lives. It's so sad because this is such a beautiful city."

Navy Pier listed items left behind on the mayhem on a lost-and-found website. The items include footwear, cell phones, purses and strollers.

"On days when we anticipate a higher volume of guests, such as the Fourth of July, we increase our security measures significantly," Navy Pier officials said in a statement. "The tragic event that transpired Thursday night was an unfortunate isolated incident." 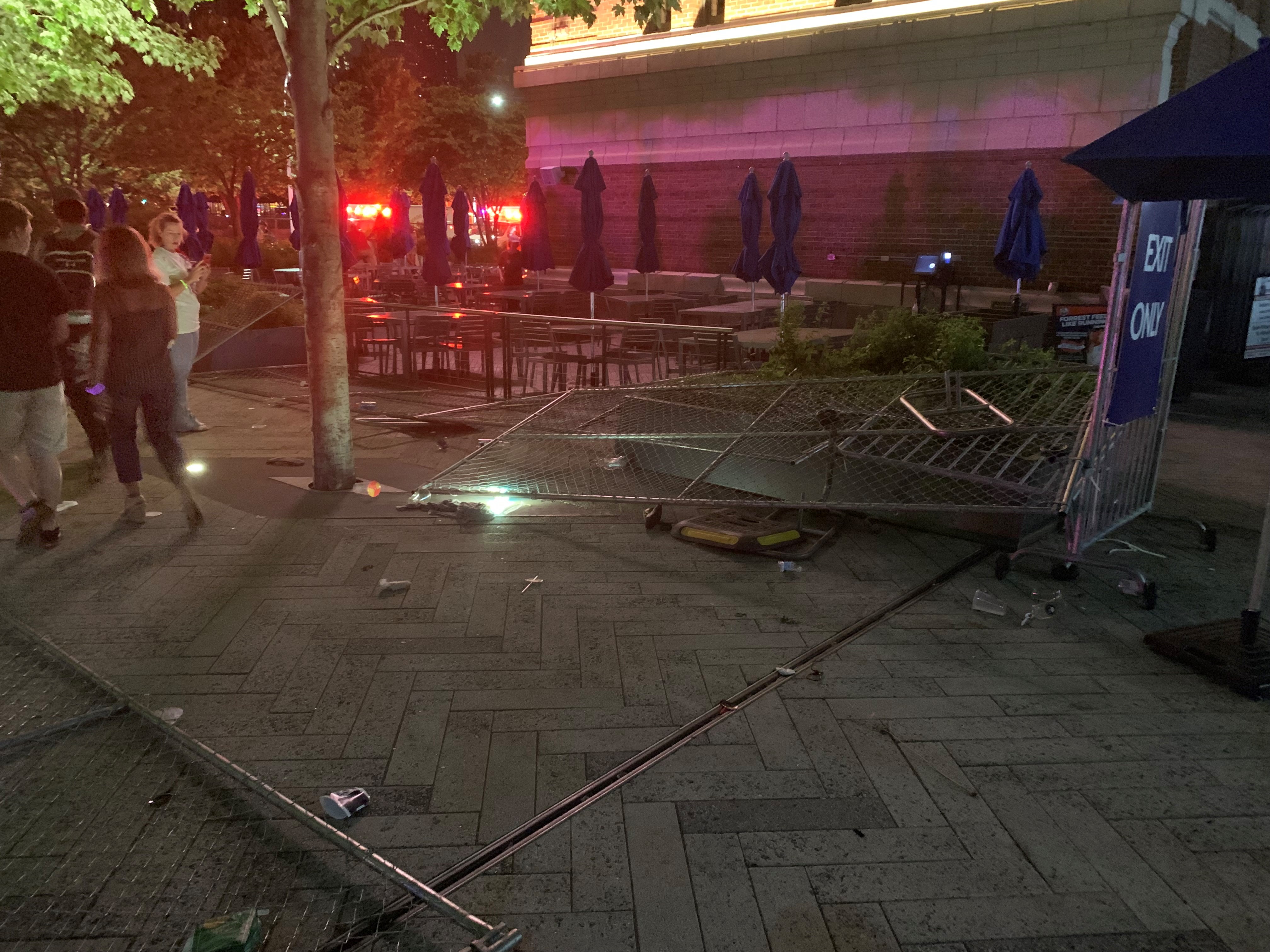 Cell phone photos show several gates that had been set up knocked down after the chaos.

Veal said the incident is making her think twice about where she takes her daughter.

"I want my daughter to experience these things our city has to offer but until it gets to a measure of safety that I'm comfortable with, I won't be bringing her to any of these events," she said.

Veal and her family are sore and bruised, but otherwise uninjured. The family lost a toy and a bracelet that Veal had gotten for Mother's Day.

Tourist Carly Lowe and her family were visiting from Tulsa, Oklahoma, but were not hurt.

"It was pretty crowded and then all of a sudden this roar of people started running at us," she said.

Thirty-one juveniles were arrested for disorderly conduct, police said. Five adults were also arrested, two of them on weapons charges. 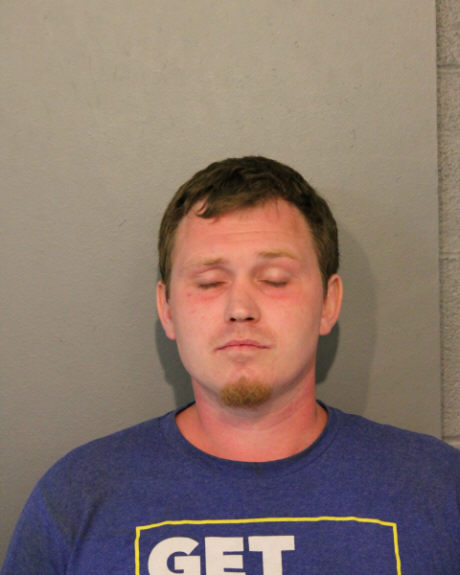 Justin Tackett, 28, was one of those arrested on weapons charges. Police received a call about 10:35 p.m. about a man with a gun inside a parking garage at the pier. A witness pointed Tackett out to police and blocked Tackett with their vehicle when he tried to flee, police said.

The Kankakee man faces one felony count of aggravated unlawful use of a weapon and two misdemeanors for having a weapon and ammunition without a valid FOID card.

Navy Pier issued a statement about the situation on Friday calling the incident "tragic" and offering "thoughts and prayers to those recovering."

"Please know that the safety and security of Navy Pier guests, partners and staff is our top priority every day," the statement said in part.