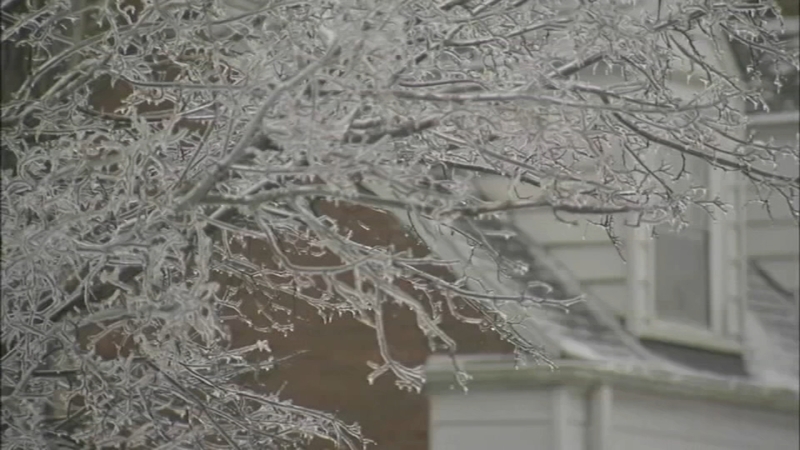 Snow, sleet and freezing rain have created slippery travel conditions across the Chicago area, with more accumulating snow falling Tuesday evening, but the real problems are being caused by ice.

Power lines over 63rd and Normandy on the city's South Side started sparking under the weight of a coating of ice.

Across the area, ice-coated tree branches and power lines, led to over 70,000 ComEd customers experiencing outages. A bulked up staff of 400 moved from outage to outage, restoring power.

In the Loop, falling ice outside Willis Tower closed Franklin Street from Jackson Boulevard to Adams Street for most of the day, as well as streets around the former John Hancock Center. While streets and sidewalks across downtown have since reopened, signs continue to warn pedestrians of the danger.

A Winter Weather Advisory is in effect for Lake and McHenry counties and southern Wisconsin until midnight. Northern suburbs could end up with 2 to 7 inches of snow.

A Wind Advisory will go into effect for the Chicago area at 2 p.m. and continue until 3 a.m. Wednesday.

Precipitation began late Monday afternoon as rain and then turned into freezing rain and snow depending on temperatures throughout the area. Freezing rain left sidewalks all over the city deceivingly slippery, including covering the lions outside the Art Institute in ice as well as Divvy bikes.

Salt trucks made constant rounds on the roads, but the difference between melted thin layers of ice and remaining slick spots could be hard to spot. In Naperville, commuters got off the train at the Route 59 station only to find their parked cars caked in a layer of ice.

Residents inside one home in the 5800-block of West Dakin Street woke up to a loud noise at about 4 a.m. and realized a huge branch off their tree in their front yard snapped off. Ross Lawenstein was asleep and he walked out his front door and saw the damage.

"I was sleeping and it was just like thunder," Lawnsein said. "I thought it was just thunder, it lasted for about 15 20 seconds. I come running to the front and this is what I saw."

Some of the branches even hit his roof and onto his neighbors car and the yard next door.

From the northern suburbs, to the south and west, snow and Ice blanketed the region once again.

"It's rather easy in terms of just pushing snow but the challenge in this region is things get very icy. Dealing with ice is much more difficult. More of our efforts is putting the salt down and allowing it to be worked in by traffic. Then we scraped that off and we go through the same effort again," said David Brown, public works director for Vernon Hills.

And while another inch or two of snow may accumulate Tuesday evening, residents took advantage of the afternoon lull to try to get ahead of it as much as possible.

"You never know, because you're by the lake and things change. But I see a lot of alerts and we're always ready for something in Chicago," said Yvette Gideon, an Evanston resident.
EMBED More News Videos

An ice storm knocked out power to thousands of ComEd customers Tuesday morning in the western suburbs.

Ethel Alston in southwest suburban Orland Park sent ABC7 video showing where her car window with a layer of ice on it.

Ethel Alston in southwest suburban Orland Park sent ABC7 video showing where her car window had a layer of ice.

The ice storm has led to many schools across the area to delay their start times. CLICK HERE for a full list of school delays and cancellations.