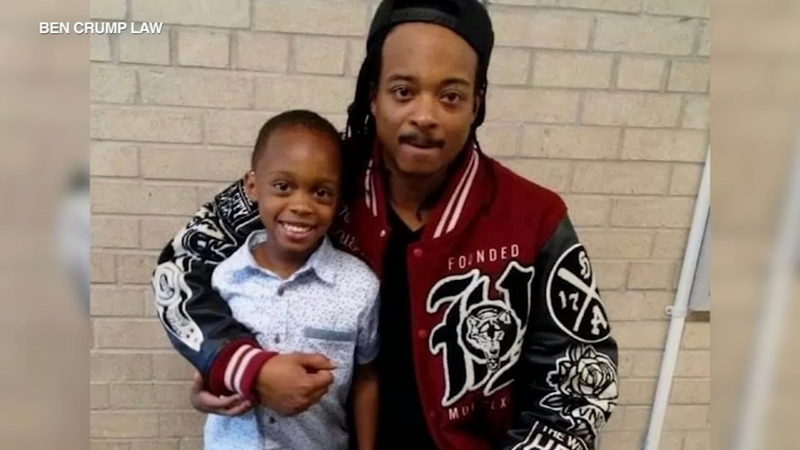 He said police responded to the 2800-block of 40th Street Aug. 23 after a female caller said her boyfriend was not supposed to be on the premises.

During the incident, police tried to arrest Blake, deploying a Taser, Kaul said.

Officer Rusten Sheskey later shot Blake, after the Taser did not stop him, the attorney general said. No other officer fired a weapon.

Sheskey has been with the police department for seven years.

Blake later told police he had a knife in his possession, and a knife was found on the vehicle's driver's side floorboard, Kaul said. No other weapons were found in the vehicle.

A federal civil rights investigation has been opened regarding the shooting.

A 17-year-old suspect from Antioch is in custody in Illinois after overnight shootings in Kenosha left two people dead and one injured amid protests surrounding Blake's shooting, the ABC7 I-Team confirms.

According to a criminal complaint, 17-year old Kyle Rittenhouse is charged in Wisconsin with first-degree intentional homicide. He is being held at a juvenile facility in Illinois.

The village of Antioch imposed a curfew Wednesday from 8 p.m. to 7 a.m. daily, "until further notice."

According to Antioch Police, Rittenhouse was arrested Wednesday morning in Antioch on a juvenile fugitive from justice warrant out of Wisconsin. Antioch police said he is being held pending an extradition hearing scheduled for Friday.

The shooting took place amid a third night of unrest in Kenosha as demonstrators continued to clash with police in wake of the shooting of Blake.

According to Kenosha police, around 11:45 p.m. officers responded to the area of 63rd Street and Sheridan Road for reports of shots being fired and multiple gunshot victims.

The FBI is assisting Kenosha police with the shooting investigation.

ABC 7 obtained a video from the scene overnight.

The shooting came as the night was coming to an end.

Brendan Gutenschwager is an independent journalist who has been covering the riots and the peaceful protests in Kenosha since Monday. He shot a video showing a young man being chased down the street and a crowd of people yelling and chasing after him.

The head of the public safety committee for Kenosha's City Council told the I-Team Wednesday the individual in the video is Rittenhouse. He was reportedly the only person to shoot anyone during overnight protests. He used an assault-style rifle.

Kenosha police are looking into whether Rittenhouse is linked to local militia groups that wanted to be deputized so they could assist officers in patrolling the streets.

"Wisconsin is an open-carry state, which means as long as you're over 18, and as long as you have otherwise a lawful right to carry the weapon, you can do it," said ABC 7 legal analyst Gil Soffer. "In Wisconsin, an individual can carry openly a loaded rifle and walk down the street with it. So, two individuals and three individuals could do that, too. However, where it could cross the line is, are they doing it with a malicious intent or criminal intent and are they effectively serving as a private security service because if that's the case, then they need a whole host of licenses and insurance and other terms."

Early in the evening, the teen is seen interacting with police.

The young man is seen on video tripping and falling. He raises his weapon and opens fire. Police said it's not clear why he fired the shots.

"He then is basically being chased by this crowd that is trying to get him," Gutenschwager said. "He trips and falls and so he is on the ground and takes a basically defensive position, pulls out his gun and just starts shooting at anybody that got to close to him and so this crowd had attempted to apprehend him. Instead, he turned around and shot a couple of people."

It is not clear if that shooter is responsible for the two deaths.

Gutenschwager watched and filmed and said that the same young man walked past authorities in law enforcement vehicles.

The shooting came amid another violent night of protests, with cars burning, people throwing objects at police and authorities deploying what looked like pepper balls and tear gas.

Protesters tried to push down the fence near the courthouse, and police in riot gear moving up street.

Civilians were seen carrying rifles, some standing on the roof of buildings holding their guns.

At a press conference Wednesday afternoon, the Kenosha County Sheriff David Beth announced the curfew would now be starting at 7 p.m. and extend through Sunday.

"In Kenosha, we are not accustomed to riots," said Sheriff David Beth. "Not accustomed to it. We pulled resources. We pulled knowledge from federal and state agencies and the cooperation between all of them have been incredible."

Beth said he would not deputize armed citizens to patrol the area and the shooting was an example of why he would not.

The National Guard was called in again to respond to the unrest.

"We cannot support violence; when the line crosses from stating one option to taking violent action and hurting people, damaging property and general unruly behavior, that must stop," he said.

Miskinis said the investigation is now in the state's hands, and, because of that, he cannot comment.

"We're not hiding behind what is being referred to by some across the nation over the years as 'blue line of silence,'" he said. "The state of Wisconsin has a statute and a procedure that removes the law enforcement agency involved in the use of force from the investigation."

The oppressive August humidity and decades of racial tension reignited by a video of police shooting Blake in the back is imploding the small city.

Earlier in the evening, there were small gestures of peace, attempts at healing. Two straight nights of destruction have left the city a skeleton of itself.

A third night of protests led to some unrest in downtown Kenosha Tuesday night, with police deploying tear gas and protesters appearing to throw bottles.

"I'll be in front of my house and so will my neighbors," said Robert, an armed citizen who declined to give his last name. "Everybody's on edge. This is ridiculous."

"What a lot of people assume is I'm on the other side, I'm not. When I saw that video of that man being shot int he back by police, I was disgusted," said Kevin Matthewson, a former Kenosha alderman. "I agree with them on most of what they're saying, let's just keep it peaceful."

National Guard and riot deputies filed into the now fortified courthouse, but other than that police, or any law enforcement, are practically invisible. Protesters are again occupying a center square, but on the streets, there's a small line of defense

"If you gonna be down here, come here correct. Talk to us, let us know how we can fix this together," Franklin said. "Of course we take your help, but you not going to come in here, take over the situation, tear down our city, our resources for our kids and family, and think you gonna go back home. No, no, no."

Police in riot gear cleared protesters from the park they were occupying shortly before 10 p.m.

The Kenosha Common Council called an emergency meeting Tuesday afternoon to discuss a response to the unrest that set buildings and cars on fire Monday night. They voted to put an emergency declaration into place until Friday.

Kenosha residents came out to clean up after a second night of unerst and fires following the shooting of Jacob Blake by a Kenosha police officer.

A council member told the ABC7 I-Team the details of the declaration were still unclear.

Protesters are angry about the police shooting of 29-year-old Jacob Blake, an unarmed Black man who was shot seven times in the back in front of his children on Sunday.

Personal insults and full water bottles flew from the crowd into a line of Kenosha police guarded by riot gear.

"He should be charged with attempted murder," he said. "There was nothing that could justify you using a tool that kills people against my nephew, who had virtually done nothing wrong and broken no laws."

Blake's family said he is being treated at a Milwaukee hospital, where he is stable.

Three police officers are now on administrative leave as the investigation continues. Their names have not been released. Kenosha police are asking people to withhold passing judgment until all the facts are known. Blake's uncle called on people to stay peaceful.

The Blake family's attorney Ben Crump joined Good Morning America Tuesday morning and said Blake is in stable condition but remains in the ICU. Crump said his three children are "absolutely devastated" by the shooting.

Once again, a Black man — Jacob Blake — was shot by the police. In front of his children. It makes me sick.

Is this the country we want to be?

Needless violence won’t heal us. We need to end the violence — and peacefully come together to demand justice. pic.twitter.com/WdNqrxA3PK