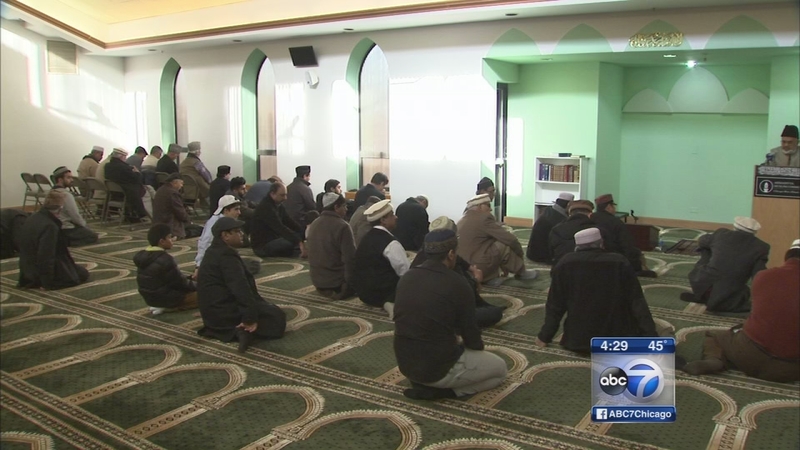 GLEN ELLYN, Ill. (WLS) -- Prayers in Glen Ellyn Friday were dedicated to the dead and injured of San Bernardino, Calif. in a spasm of violence that has some Muslims looking inward to figure out how their religion is being hijacked.

"On a small scale, the third World War has started already and if we don't take our responsibility, then it will spread all over,"

The Imam says his branch of Islam has been at war with extremists for 125 years, and that the solution to silent radicalization of American youth is to confront it.

"We must stand united against this attack and cannot let it become a propaganda tool for extremist organizations like Daesh," the Imam said.

Daesh, a derogatory term for ISIS, is one way of discrediting those who are spreading a false interpretation of Islam. Many here acknowledge they have to push back.

"The thing to say at this point right now is, 'Where is it written in Islam that allows a Muslim to take on this type of radical ideology and philosophy? Where are they getting this from and where do they think they are going to get any rewards from this?'" said Dr. Kaleem Malik, a trauma medicine specialist.

Ahmadiyya Muslims, like others, are shocked at the sophistication of social media campaigns that seem to be getting ISIS its followers. They say San Bernardino is a wake-up call on the heels of the Paris attack just three weeks ago.

"I think young people, as the future, they do need to speak out against it, they need to make their points firm and clear," said Sajeel Latif, a pharmacology student at Benedictine University.

"All I see from the Muslim community is sadness and anger when things like this occur and people use our religion to kill people and cause destruction on earth," said Nyla Ahmad. "It's very difficult just as a human being to see these things happening and then as a Muslim it is even more devastating."

"Prophet Mohammed, peace be upon him, he taught us how to live our lives for Islam - he did not teach us to kill for mankind, kill for God," Malik said.

The Ahmadiyya Muslim community is a reformist international movement within Islam. It was founded in 1889 and now has 160 million members in 207 countries.