WLS
By Will Jones and Alexis McAdams
CHICAGO (WLS) -- Alderman Ricardo Munoz, who is facing allegations that he hit his wife, entered a not guilty plea Thursday morning as a judge decided whether he would be released on bond.

The alderman, who represents the 22nd Ward, and his wife were both in court, along with other family members.

The judge granted a non-contact order in the case, meaning Munoz cannot call, text or see his wife - or their dog - until further notice.

Munoz is keeping quiet for now about the alleged attack on his wife, Betty Torres-Munoz. But she is no longer staying silent.

Betty Torres-Munoz says her husband, 22nd Ward Alderman Ricardo Munoz, is a womanizer and an addict who has abused her for years.

"It has taken me a lot of courage to get to this point, trying to diminish the shame of living with an addict, a womanizer. I suffer from PSTD from the abuse. I have been hospitalized numerous times," Torres-Munoz said.

Torres-Munoz told police her husband pushed and hit her during an argument at their Little Village home. Police said he left before they arrived.

Alderman Ricardo Munoz has been arrested in connection with a domestic violence incident on New Year's Eve, police said.

Officers arrested the alderman Wednesday morning at his 22nd Ward office, a ward he's represented for 25 years. He announced in the summer that he would not seek another term.

"I didn't come forward sooner because of his public image and I didn't want this because I am entitled to my privacy," Torres-Munoz said.

Torres-Munoz filed for an order of protection on Wednesday. They have been together for 34 years and married for 30. She said she is now finally ready to move on and that she wishes him the best.

"I have to forgive him in a sense in order for me to move on. I don't want to carry that burden with me anymore," she said.

Bond was set at $2,500 on Thursday. His next court appearance is scheduled for January 23. 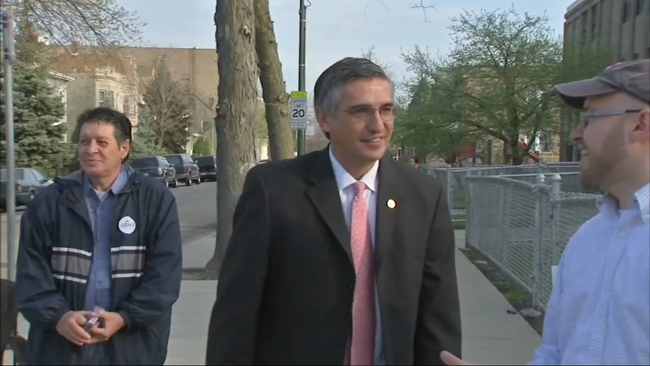