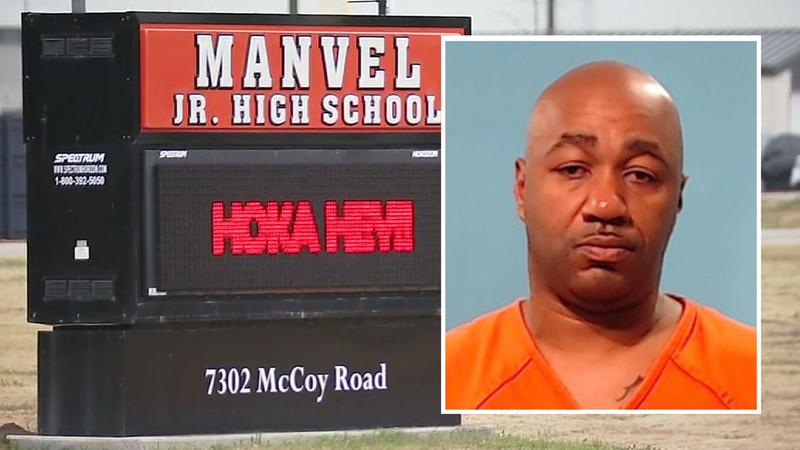 ALVIN, Texas -- A school police officer is facing a felony charge, accused of having a sexual relationship with a junior high student.

Terry Roy Tennard, 42, works for the Alvin ISD Police Department as an officer, assigned to work at Manvel Junior High.

According to the Brazoria County Sheriff's Office, investigators received information that Tennard was involved in an inappropriate sexual relationship with a 14-year-old Manvel Junior High student. The investigation allegedly revealed that the relationship had been going on for about a year.

The girl told investigators she and Tennard had sex in his office at school on about 20 separate occasions. The relationship reportedly started in Dec. 2016 when the victim was 13 years old and in the 7th grade.

A school police officer is charged with sexual assault of a child, accused of having a relationship with a junior high student.

According to court documents, the girl says the relationship began because Tennard was someone she felt she could confide in. He had been her brother's basketball coach.

The girl's mother reportedly found text messages between her daughter and Tennard on the girl's phone.

Tennard has been charged with sexual assault of a child. He was arrested at his home in Pearland on Friday evening without incident. He was placed on administrative leave by Alvin ISD.

Tennard was transported to the Brazoria County Jail. He has been released after posting a $100,000 bond.

Investigators say Alvin ISD police officer began having sex with a student when she was just 13, allegedly in his office. More on #abc13: https://t.co/gYglxlIwYU

Alvin ISD released the following statement: "Alvin ISD makes the commitment to keep our parents and community informed regarding all matters that have implications for the safety and security of our students. Although we have limited information at this time, we feel it is appropriate to ensure that parents are aware of the events that have taken place over the last couple of days. On Friday (12/15) afternoon, Alvin ISD received notification that the Brazoria County District Attorney was conducting an investigation based on reports of an inappropriate relationship between a student and an Alvin ISD police officer currently assigned to Manvel Jr. High. Upon receiving this report, Alvin ISD immediately expressed a willingness to assist with the investigation in any way possible. As the investigation was active and ongoing, Alvin ISD officials received limited information; however, the officer under investigation was immediately placed on administrative leave to ensure there was no additional interaction with students. Over the course of the weekend, Alvin ISD received notice that Officer Terry Tennard had been arrested on charges of sexual assault of a child."

Alvin ISD Superintendent Dr. Buck Gilcrease expressed, "Should these allegations prove to be accurate, the sense of violation, sadness and anger is almost immeasurable. Communities place a great deal of trust both in educators and law enforcement officials. If, as reported, this individual has violated the public's trust, Alvin ISD pledges to assist the County with the ongoing investigation and full prosecution available under the law. Alvin ISD is currently in contact with our attorney regarding formal termination. I make the commitment to our parents, to our students, and to our community that all available resources will be used to ensure this type of activity does not occur in the future."
Related topics:
texasalvin isdimproper relationship with studentu.s. & worldsexual assaultchild sex assault
Copyright © 2021 KTRK-TV. All Rights Reserved.
More Videos
From CNN Newsource affiliates
TOP STORIES