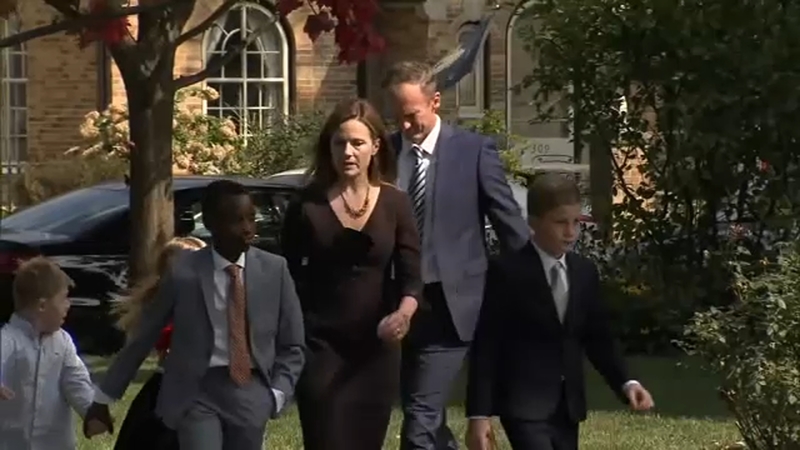 Barrett is the first University of Notre Dame graduate and faculty member to be nominated to serve on the nation's highest court.

Now, the university is celebrating the achievement.

Brennan Buhr, a first-year law student at Notre Dame, moved in across the street from Barrett this summer in South Bend, but he said he never introduced himself.

He didn't get a chance to catch her leaving her home this morning with her family to head to Washington.

"We might want to bake cookies for her at some point just to congratulate her," he said.

Barrett graduated first in her class from Notre Dame Law School in 1997. She's been on the faculty since 2002.

"I am just so proud that we have someone who is quite possibly going to be a Supreme Court Justice who is on the faculty," Buhr said.

However, Tricia McCormack, a Notre Dame freshman from Chicago, said there's a mixed reaction on campus to the nomination.

John Adams served as Barrett's law clerk from 2017 to 2018. He traveled from Chicago to attend Saturday's White House announcement.

"It was profound to see President Trump nominate Judge Barrett, someone I think the world of and to see the remarks that he gave about Judge Barrett and the qualifications that she has to be a Supreme Court Justice," Adams said.

Sen. Dick Durbin, who sits on the Judiciary Committee, is accusing the Republicans of hypocrisy for filling an election-year vacancy, saying, "They want another vote on the Supreme Court for their lawsuit to overturn the Affordable Care Act."

"Trump and the Senate Republicans are focused on jamming through this nomination in a transparent grab for power," Sen. Tammy Duckworth added.

"The senators are dug in," said ABC7 Political Analyst Laura Washington. "The Democratic senators are not going to support this candidate no matter what. The Republican senators already have the votes."

Amy Coney Barrett is the first University of Notre Dame graduate and faculty member to be nominated to serve on the nation's highest court.